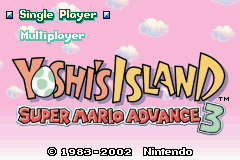 What do I remember about the original Yoshi's Island? Well, as I'm writing this, it's only been two weeks since I last beat the game - so just about everything there is to it from Baby Mario's God awful screams to the epic rise of Prince Bowser. Sitting down for the first time with Super Mario Advance 3, it feels like I'm doing it all over again. One of the last great SNES platformers on a handheld, in a visually upgraded form; unbelievable. Super Mario Advance 3 is perhaps needless for those already in possession of the original game, but a mandatory purchase for anyone who never experienced it, and those who want to see the game flourish on a tiny LCD screen with their own eyes.

A stork carrying two babies over the sea is attacked by Kamek, Prince Bowser's heinous court magician, who is in search for playmates for his young master. Kamek is able to capture Baby Luigi, but the fallen Baby Mario disappears from his sight before he can catch him. Mario lands on Yoshi's Island, on the back of a green Yoshi, who tends to the baby before deciding to take the baby to his brother and deliver both children to their worried parents.

The game looks amazing, pretty much flawless. Keep in mind that this game originally came out during the SNES' last stand and back then, the graphics blew everyone away in quality and their hand-drawn, pastel coloured style. Nine years later, we're seeing those very same graphics on a handheld, and this time as well, these graphics represent the absolute best the platform has to offer. Moreover, Super Mario Advance 3 tops (that's TOPS) the original Yoshi's Island in graphical presentation. I simply cannot believe it. It's like they've held back with every other Game Boy Advance game, including every other game in the Super Mario Advance series, for the sake of this one game. The definition's better, too, fit for the small LCD screen; in quality, Super Mario Advance 3 is a sharper, crystal clear version of the original game.

With Baby Mario's screaming from the original still echoing in my head, I entered this version of the game with horror. The sound effects and voice samples in the previous Super Mario Advance games were pretty horrid, especially those in the first one. Actually, they toned down Baby Mario in this version, which is worth of applause... however, Yoshi's voice samples from the ill-fated Nintendo 64 game Yoshi's Story are brought back, and listening to them for the duration of the game whenever Yoshi does the Ground Pound, or throws an egg or does something else physical is pretty much the same as listening to that damn plumber-wannabe cry his lungs out in the SNES game. The music is exactly the same, there are no changes to the soundtrack whatsoever; a bit repetitive, but good. I still love all the boss music in the game - the Bowser theme was meant to rip ass - and the dark, ambient melodies of underground areas and interiors.

The reason I'm noting graphics and sound more than usual is the fact that the game is identical to the original game, during the first playthrough. There are just few visual changes to the menus and maps, and that's pretty much it. To my understanding, you get an extra life upon each 200 points accumulated, and naturally, the controls have changed. There's simply nothing else new - this is the exact same game you hated to love because of that damn brat back in the day. Well, after your first playthrough, you'll unlock six new, tough stages, and if you beat all of these in addition to EVERY other stage in the whole game - including the bonus stages in each region, which are still pure evil - you get an alternative ending for your troubles. That's a whole heap of troubles, right there, slick.

Before you ask: no, I haven't done it. I haven't seen the other ending. Hell, I've never even beaten the bonus stages except for the "Poochy's Not Stupid" (I dare disagree) bonus stage which unlocks after beating 100% of World 1. Yes, the secret stages added to this version of the game make it even harder than the original Yoshi's Island - and that's hard. Extremely so. You're in for one hell of a challenge, regardless if you conquered the original game or not.

Yeah, it might lack new shit, and it might be needless. Even I didn't actually NEED another version of Yoshi's Island, proven by my enthusiasm towards the original when I took on it a few weeks ago at my friend's new crib. But it is amazing. Playing the game on a handheld lacks the magic of sweating yourself dry on the sofa trying to plunge that log right up Raphael the Raven's ass or playing fatal dodgeball with Prince Bowser, but it's still fun. Despite being a simple re-release of a classic 16-bit game instead of a remake or a new, exclusive title, Super Mario Advance 3 might very well be Game Boy Advance's finest game.