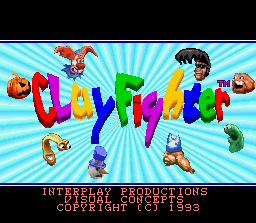 Have you ever thought that one-on-one beat ’em up games and flagship platformers have a lot in common? Back in the time, everyone needed to have one of each. The trend of fighting games was given birth by Capcom’s Street Fighter II in 1992. Suddenly, there was a heap of Street Fighter wannabes behind every corner – every developer tried their best to make their games look like their own and some variations looked quite interesting, to say the least. Interplay’s solution for stepping out of critical mass was the use of stop-motion animated figures made of clay, fighting it out in the common language of slapstick humour. Clay Fighter became a moderate hit... but exactly how big a part did the game’s look have in its success?

Clash of the pottery

A meteor crashes on a travelling circus and spreads goo which turns the quarreling employees into clay caricatures that mirror their personalities. The eight physically enhanced freaks battle it out in a fighting tournament to see who is truly the King of the Circus.

The graphics and sound are the two things on par in this game. The animation’s wacky and amusing, and by far the only reason to keep hacking through the game is to see all the different characters and their behaviour in battle. The stop-motion frame rate could be better, especially as the control is so slow and stiff in itself. The music is good ambience, while the voice samples sound like they were recorded in a toilet. Why put the irrelevant announcements in if the capacity didn’t allow their proper execution?

When I was a kid, I was into fighting games. Not just the games – the characters, everything related to this genre; hell, there was even a time I enjoyed the abysmal Street Fighter movie. Nowadays, the only fighting game series I can play without almost immediately boring myself to death or snapping arteries just by cringing is Tekken, and of course there’s also a “fighting game” series I actually enjoy, THQ’s SmackDown! series... but, I’ve never thought of it as a series of fighting games, rather a tactical sports entertainment franchise. All this aside, I still find myself magically hooked whenever I pop in an old classic in the kick-ass genre, for some very odd reason – Ultimate Mortal Kombat 3, or Super Street Fighter II, or something of the kind. I don’t really like them as I used to anymore, but I’ve got to play them! After all, they’re classic... whereas Clay Fighter isn’t.

First, it looks like a fun game. The characters are absolutely great; Bad Mr. Frosty and Ickybod Clay rule. The humour works, too. The game itself, however, suffers from the typical genre flaws of the decade: bad controls, very little depth, not much lifespan. As a matter of fact, double this all in Clay Fighter’s case. When Street Fighter II originally came out, people praised the controls and when Mortal Kombat was released just a while later, it was praised for its infamous violence (awkwardly cut from the SNES version), but criticized for not being nearly as smooth as Capcom’s game. People hadn’t seen Clay Fighter yet. The controls in Mortal Kombat are dreamy, near-perfect when compared to Clay Fighter, and there’s nothing in the game that stands out besides the characters and the settings.

The game is stiff as heck and it’s incredibly difficult to execute special moves. The game gets really annoying when you seem to get your ass kicked all due to bad timing. The movement is so slow that bad timing becomes your bad habit soon after the game has started. By far, the only option on the behalf of survival on the hardest difficulty is to keep a merciless lock on your opponent, punching and kicking like there’s no tomorrow. If you’ve played any fighting game or a wrestling game with a friend or over the Internet, ever, you most certainly know how boring and unspectacular that method of offense is, and how far it is from a truly enjoyable gaming experience.

The game is more like damn frustrating than difficult, and moreso, boring. Most of the time it’s either lock up your opponent with generic moves, or lose because of bad timing and once again failed special manouver. It’s incredibly hard to be interested in the game at all and try to learn the special moves, because the game is so freakin’ SLOW. Before you say anything, I know you can adjust the speed of the game, but that just spells more trouble with the frame rate, that affects the gameplay in itself.

Although Clay Fighter features one of my favourite, singled out video game characters in history in Mr. Frosty (as in BAD ASS), it’s pretty much one of the several fighting games of the 90’s I would be glad to simply forget. More focus on the gameplay instead of the admittedly unique theme could’ve helped in making it the beat ‘em up classic it was supposed to become, and the classic some genre freaks still regard it as.

Blue Suede Goo’s name is a parody of the Elvis Presley song “Blue Suede Shoes”. “Big Hunk O’ Burnin’ Clay” is written on his piano. This parodies an Elvis song entitled “Hunka Hunka Burnin’ Love”. Of course, the character himself is modelled after Elvis Presley in his later years.

Ickybod Clay’s name is a parody of Ichabod Crane, the protagonist in The Legend of Sleepy Hollow, the classic short story written by Washington Irving. However, his pumpkin head is borrowed from the Headless Horseman, another character in the story.

N. Boss’ name is a parody of M. Bison, the final boss in Street Fighter II, and his name is pronounced, of course: “End Boss”.
Signed by Kuzpo klo 8.20