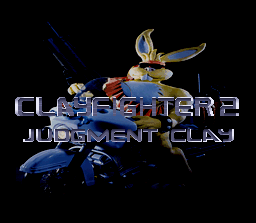 The moderate commercial success of Interplay’s previous game deemed Clay Fighter 2 an inevitable sorrow to come. Despite a quite unanimous bashing by several high-profile video game critics all around the world, Interplay went on to release one more stand-alone Clay Fighter game for the Nintendo 64. Luckily the least bit of interest I had in the franchise ceased to be when this game came out, so I never tried that one... and probably never will. Clay Fighter 2 is that horrible.

Dr. Kiln, the mad scientist responsible for the clay meteor that turned several circus employees into clay caricatures of themselves, arrives on Earth in a spacecraft and spreads more goo in Mudville to create more of these clay fighters. He then establishes the C2 tournament to see who has what it takes to become the top fighting freak in town.

This time, Interplay developed the game themselves, without the efforts of Visual Concepts. They abandoned stop-motion to establish a better frame rate and smoother general movement. That’s nice, but the game doesn’t look like much of anything. It’s plain, grainy and confusing. There’s just too much stuff in there, and the sprites are smaller. The music is OK, but the voice samples and effects are even worse than in the previous game.

The gamepl... the WHAT?! Let us thank Interplay first, for speeding the game up a little. There, a compliment. Now let’s go find the suckers who made this game and plug a bomb in everyone’s ass. All of the characters in this game jump around, incoherently and totally oblivious to the player’s commands, like bunnies on dope; in Hoppy’s case, that’s quite literal. Seriously, you want a comparison? Go talk to a wall and listen to its response, and you might get the idea of how responsive the controls are. I found a list of special moves and I tried it out strictly on this review’s behalf; otherwise, I just wouldn’t have been interested. OK, so my character is Mr. Frosty, naturally. “Rising Ice” looks simple enough – I just have to move forward, press Down, then Up, and punch. ...45 minutes later (I SHIT YOU NOT!), I’ve FINALLY landed Rising Ice. It’s incredibly difficult to execute even the most simplistic move with controls that are this bad.

The things I like about this game are very scarce. If you somehow manage to get to the end (by using some of that Turbo controller magic, I reckon), you will encounter your character’s evil counterpart as the final boss, and unlock him/her after winning. This is an idea later perfected in Tekken. The downside to these characters is that they look nearly identical to the normal characters, like they’re alternate attires used in multiplayer or something. The other thing is the humour that was successfully carried over from the first game... although there really isn’t a whole lot of laughing going to happen once you start the game.

Now it all comes down to this: can I really call Clay Fighter 2: Judgment Clay a disappointment? Well, in a way I can. First of all, it’s usual to fix old mistakes in sequels, not capitalize on them. If I had to choose in a life-death situation, I’d definitely hack the first Clay Fighter game for weeks in total, utter seclusion from the rest of the world before taking this game for another ultra-boring, tedious, incoherent run. Even Bad Mr. Frosty can ditch the “Bad” ‘cause he ain’t that bad anymore, even if I did totally crack up when I read his backstory of being incarcerated for beating up Santa Claus. Now that’s what I call fun. This game isn’t. At all.

The game’s name is an obvious parody of the movie Terminator 2: Judgment Day, also known as T2. The title screen portrays the character Hoppy in a recreation of the movie’s theatrical poster.

Dr. Peelgood’s name is a parody of the Mötley Crüe song and album “Dr. Feelgood”.
Signed by Kuzpo klo 8.36