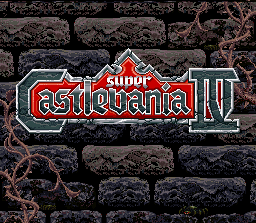 Just a while after the launch of the almighty SNES, every popular game franchise ever marketed for the NES or Game Boy already had a SNES installment or one coming, so it was only a matter of time we would see a Super Castlevania. Instead of making another actual sequel to the medieval horror platformer, Konami and Nintendo worked together to demonstrate the power and capacity of the new console by completely redesigning and rewriting the first Castlevania game from 1986. Many things have changed and some purists might shudder upon hearing the word “remake”, but... Super Castlevania IV is, by all means, a new game and one that was created to be remembered as a classic – a defining Castlevania experience.

“It’s the year 1691. Transylvania has been a peaceful and prosperous region for a century, thanks to the endeavors of one Christopher Belmont, who slayed the abominable king of vampires, Count Dracula. His sudden and unexpected resurrection casts a dark shadow over the region, and it is up to Christopher’s heir Simon to follow his great grandfather’s footsteps and storm the evil lord’s castle. However, to get to Dracula, he needs to get past his minions, including Frankenstein’s monster and Dracula’s right hand man, the Grim Reaper himself.”

This is what I outlined in regards to the first game’s plot, and it still stands. When we get to the game itself, or just take a look at it, only one sentence crosses minds: talk about an overhaul! Despite its age, Super Castlevania IV might be one of the most visually impressive games on the Super Nintendo. Character animation is superb, the constantly changing scenes look awesome and create fine atmosphere, and the very welcome Mode 7 effects kick ass. The level design is absolutely phenomenal. One of the forts you must hack through to get to Dracula’s main keep rotates, constantly... and literally, rotates. Not only does this add excitement and challenge to the game in many ways, it also looks good. And what about the soundtrack? Well, the word “KILLER” describes that experience pretty well. We have tons of new, more or less spectacular tracks, with Simon’s theme song being probably the best new tune, and completely redone versions of some of the best tracks in the whole series. Yes, including “Vampire Killer”, and “Bloody Tears”, oh hell yes!

As far as gameplay goes, there are many things in common between the original “version” and Super Castlevania IV. Some elements from Castlevania III are also present in thematics and gameplay alike, but this one takes the intensity of the basic ‘Vania action to the max. It borrows some, changes some, leaves out some, and puts a whole lot of new, fresh meat to the table. This time, we have a long way ahead of us to get to the castle (like in Castlevania III), while the events in the original game all took place inside the walls. We have two different world maps, one for the castle’s exterior and one for the castle itself, so there’s a whole lot of playing going to happen and a whole lot of shit going down. First, we are taken through courtyards, moats, gardens, and caves, and when we finally reach Dracula’s keep, the difficulty of the game soars to being almost unbearable and we have to make our way to the very highest tower of the castle, through the dining room, library and treasury, just to name a few hot spots. Every location in the game has one thing in common: DEATH, and while you should try to avoid it all you can, you should also try to whip the hell out of everyone and everything coming your way that has already experienced it.

There are many new bosses in the game, but most of the guys that harrassed you in the original have been graphically resurrected; they attack you in a different order, in different places, and the best strategies to beat them are very different from those of before. There are many new types of regular enemies as well. Few are extremely annoying to deal with, and we still have all kinds of flying bastards around, including the Medusa heads and the bats that have plagued us Castlevania players from day one. And yes, they are still mainly there to push you over the edge, literally AND figuratively. In addition (yep), there are enemies and obstacles that don’t do any direct damage, but can help other enemies to catch up to Simon and maul him around a little bit. This time, there are stages and parts of them I like to call “gauntlet runs”, which have influenced many games to date. A standard gauntlet run usually involves one or multiple corrupting platforms, which you must cross while killing enemies that come for you, or while running from them. You absolutely must run from time to time, it’s no time to be feeling proud. There are also many sequences which require fast reflexes and seamless fingerwork from you to progress and ultimately survive. Overall the game is much, much more intense than you might’ve expected.

Not only can Simon walk while crouching, his jumps can be controlled a lot easier. The evergreen staircase “glitch” which causes you to fall through stairs if you jump on them is still there, but overall the stairs don’t pose the threat they used to. It’s easier to climb them, too. Your weapons are still the same as before, but the Vampire Killer itself has three new, major features which you will deem handy. You can now whip it in any direction, which makes things a lot easier by decreasing the amount of jumping around like a jackrabbit, usually to your demise at that. It can also be used as a rope to swing Simon from one ledge to another by keeping a lookout for conveniently placed hooks. They are very visible and don’t disappear in the background as their likes usually have the tendency to do. In the later parts of the game, this ability becomes very important as some stages are wholly based on it. Perhaps the coolest and most practical addition is the whip shield. By holding the Y button after a lash, you can hold the Killer in place to fend off attackers with it – what’s even better, the enemies that come towards you are damaged and/or killed by the makeshift shield. Very nice, especially against all those flying bastards.

To prevent the game from getting TOO difficult and hectic, food is scattered around as a commonly found power-up instead of being exclusively hidden in walls. It’s still rare, but reason enough for you to go out of your way to smash those candelabras.

The game isn’t a piece of cake by any means, it’s actually pretty damn difficult. Just not the toughest Castlevania game out there; that prize goes to Castlevania III in my opinion... Simon’s Quest and Dracula X are just frustrating. The game is truly challenging at times, and what’s most important, it’s always entertaining. The unlimited continues, the fair amount of lives and the password system are very helpful. They could’ve added in just a few more checkpoints, though, as some areas are loooooooooooong. As homage to the original game, a hard mode is unlocked after the first playthrough. I don’t feel the need to go into it.

Super Castlevania IV is an excellent application of the original, vintage concept. It sports fabulous audiovisuals, not to mention intense, inventive and exciting gameplay that has made players really sweat for two decades. Pretty much the best Castlevania game of all time, and even though I’m not exactly a die-hard fan of the franchise, I must say it’s also one of the SNES’ finest games altogether.

Nintendo Power ranks Super Castlevania IV #66 on their list of the Top 200 Nintendo Games of All Time.
Signed by Kuzpo klo 4.59