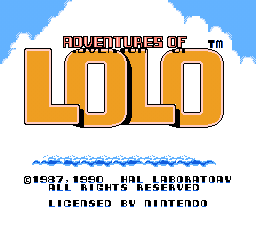 Adventures of Lolo was the sixth installment in HAL’s Eggerland puzzle game series, but the second game released outside Japan. Therefore, Adventures of Lolo somewhat developed into its own successful franchise in both North America and Europe. Where I’m from, the first game is remembered as one of the most influential and loveable puzzles of all time.

King Egger, the villainous leader of the Great Devil’s Evil Empire, kidnaps Princess Lala of the royal family of Eden Land. It is up to a brave adventurer named Lolo to journey forth into Egger’s castle in the underworld, solve its demonic puzzles and rescue his significant other.

Luckily Adventures of Lolo compensates for the lack of audiovisual presentation with something else. The game looks very simple, not much more than you’re used to see in more traditional puzzle games. The music is downright horrible, and it never stops. There are only two tunes in the whole game. The other one plays between floors and the other one for the duration of the whole game. Believe me: the latter, as merry as it is, is going to anger you. Demolish your nerves. Especially when the going gets tougher.

The idea of the game is to hack through 50 stages (10 floors with five stages each), by using your brains only. What you need to do first in most stages is to find a safe way to gather a proper amount of heart framers. These icons have to be collected to grab the jewel key which unlocks the next stage, gain different stage-specific power-ups, and to enable Lolo to fire shots which turn enemies into eggs. These eggs can be pushed around in any main direction, to create better conditions for Lolo as they are as good blockage as anything else on the screen. The eggs can also be shot off the screen completely, with an additional egg shot, but the enemies can’t be fully defeated before the end of the stage.

There are various sorts of enemies. A lot of them follow you around, and when they catch you, it’s game over. There are also some who don’t do direct damage, but can trap you in a corner, and enemies whose strict intention is to block your way to victory. Medusas are stationary, but whenever you come into a straight line with one, you’ll immediately fall due to the Medusa’s gaze, without proper blockage. The best part about the game is that you can often come up with more ways than one to dispose of all kinds of enemies, collect those heart framers and eventually the key, and continue your potentially victorious journey. The game and its puzzles are fun, and you will be hooked as long as the game lasts.

Lolo has a limited amount of lives, but this is quite artificial. If you’re attempting to hack through the whole game during one session, it doesn’t mean squat if you lose your lives, you always start from the same stage you died in when you choose to continue. The passwords, however, only get you as far as the first stage of that floor.

To my knowledge, Adventures of Lolo was the first game in which you can actually commit suicide if things don’t go your way. It’s easy, you just press the Select button any time you realize a false, irreversable move or get trapped in a corner. I personally think this small feature is great. It tears me up to be left standing in the middle of my mistakes, forced to surrender myself to Medusa or whatever. In this game, you can go with your boots on. Personally, I would’ve carried this feature over to a few games that pop to mind.

Despite starting off all nice and easy, the game gets hard VERY quickly. If you’re not too great with puzzle games in general – I have to admit, I don’t consider myself too good with them – you’ll have your hands full with it. Although I’ve been familiar with the game since the age of 8 or 9, I never actually beat the game. I watched my brother play it for weeks. He’s 15 years older than me, and very intelligent – although his intelligence is known to vary between subjects – he finally did beat the game, but not without spilling blood, sweat and tears. The guy I borrowed the game from was pretty mad at me, when he remembered where the game had been all the time. “Well, I hope you had fun.” “No, but my brother did.” Sweet memories. Still difficult, yet still fun.

Adventures of Lolo is a classic puzzle game that still holds up to many games of the current generation which have been influenced by it. There’s not much replay value, and the fast increasing difficulty + the extremely annoying jingle they call background music make long game sessions nearly impossible to bear, but I think every brainiac out there should try the game at least once.

Out of the total of ten games in the Eggerland series, only five have been released internationally.

In the game, main antagonist King Egger is referred to as the Great Devil.
Signed by Kuzpo klo 11.17