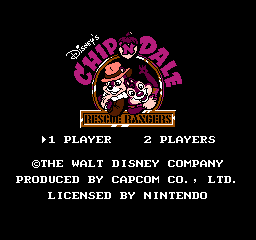 Capcom used to be exclusively in charge of commercially major video games based on Disney’s media franchises, and their mutual efforts gave us many magnificent games to sink our teeth in. In 1990, Capcom released two outstanding platformers; the first was DuckTales, which actually had seen a headstart of daylight in North America nearly a year prior. The second was Chip ‘n Dale – Rescue Rangers, based on the hit show which starred everyone’s favourite chipmunks Chip and Dale as pocket-sized detectives who took of care of children and little animals’ problems.

There’s no case too big or a case too small, when you need help just call Ch-Ch-Ch-...

Chip and Dale are on call to search for a lost kitten, but soon find out the case is a diversion set up by their arch nemesis Fat Cat, who kidnaps the duo’s inventive friend Gadget while they’re distracted. Chip, Dale, Zipper and Monterey Jack set out to make their way to Fat Cat’s well guarded casino, save their friend and settle score with Fat Cat and his mob.

Graphically, the game is a vintage Capcom/Disney product – very true to the license, great animation and character design. The enemy design in particular is fantastic, the bosses are huge. The game is not too rich with details, but that’s fully compensated for by its better graphical qualities. The sound, well, ain’t that good. For the most part, the music is extremely and moreover, surprisingly, annoying. The final stage surprises us with a good, upbeat tune which could be straight out of any Mega Man game. More of these? No? Piss off.

The game is a partly non-linear platformer – to my knowledge you don’t need to pass all of the ten stages to beat the game – in which you control either Chip or Dale and go through multilayered stages, some of which end in a boss fight. There’s not much of jumping based on timing or other sort of trick jumping here, there are a few gaps connected to obstacles in the later stages, but not too many. That’s one BIG plus. So, the basic idea in each stage is to dispose of many sorts of enemies by using just about everything you see as projectile weapons – boxes, bombs, steel blocks, apples etc. -, collect different items such as acorns and stars to power up and somehow make your way to the final door.

Like I said, some stages have a boss. These bosses are way too easy and the only strategy you need is to find one or two places in which to safely stand in for the duration of the not-so-epic battle and keep “blasting” the boss with a rubber ball until he drops dead. Capcom seemingly focused on making the bosses look good instead of making them challenging adversaries. It’s not a “bad” thing in the usual sense, but kind of disappointing.

In addition to throwing the boxes (don’t say anything about the logic of the existence of boxes this small...), you can use a box as a damaging shield by ducking underneath it and waiting for an enemy to step into your trap. This “shield” doesn’t protect you from enemy projectiles, though. An occasional large box contains the Rescue Rangers’ housefly buddy Zipper, cheese or a key item for the stage you’re in. Zipper is the invisibility item of the game. He’s underutilized and usually found in places you have no use for him in. The cheese is the key to summon Monterey Jack, the cheese lovin’ mouse, but he’s nothing more than a comic sidekick. You find cheese in secluded areas which don’t have a door to progress through. Unleashing the cheese calls out Jack, who busts through a wall after the scent and opens a route. The rare sequence is funny on the first time, but soon turns out perfectly pointless. But then again, this, if anything, is nitpicking.

After each stage there’s a bonus stage in which you can attempt to find an extra life hidden in one of eight boxes, in a few seconds of time. The funny thing is that nearly every time, the 1-Up’s in the one and the same box, in the top middle one.

I’ve heard someone say that Chip ‘n Dale – Rescue Rangers is one of his favourite multiplayer games of all time. It was indeed one of the first console games in which you could actually interact with your partner, pick him up just like you would pick up any item and abuse him any way you wanted. Kind of cool, but I’m not into multiplayer nor was I into multiplayer, especially co-op, back during the golden era of the 8-bit. Everybody’s always cramping my style! ...And vice versa. So, I can’t really comment on this subject, I just thought to mention it.

The game is, by all means, easy. It’s very entertaining as well, though, so the difficulty level doesn’t quite ruin the experience. After all, it’s mainly for kids, as hard as it is for me to admit ‘cause I’m still loving it. The game doesn’t even get that much harder at any point; the final stages have some very difficult sequences on the scale of the rest of the game, but they’re short and easily overcome with a couple of tries. The boss fights are indeed effortless, you’d have to have both of your thumbs in the middle of your left palm to jumble any of them up too badly, including the last one.

Although it’s extremely easy and a bit quirky, or shall I say plastered up with some completely needless bits, Chip ‘n Dale – Rescue Rangers is still a great, entertaining platformer and one of the best Disney games of all time. I rented this game numerous, frankly countless times when I was a kid, even though I beat it on the first time. I was so crazy about the gameplay, which was at that time, quite unique, and of course, I was a fan of most Disney shows which emerged in the late 80’s and early 90’s on the heels of DuckTales – Rescue Rangers was definitely one of them.

Chip ‘n Dale – Rescue Rangers the TV show premiered in 1989 and ran for one year and a half, divided into three seasons. The show, originally named just Rescue Rangers, wasn’t supposed to feature Chip and Dale at all; first the producers rather thought of a group of different animals with unique abilities. When they decided to cast two already known Disney characters, they moved on to The Rescuers (Bernard and Bianca) but when a sequel to their 1977 namesake movie was announced, it was decided that Chip and Dale should be cast as the heroes of the show.

Hi Tech Expressions released another game named Chip ‘n Dale – Rescue Rangers in 1990. The game was released exclusively on the PC and it has nothing to do with the Capcom game.
Signed by Kuzpo klo 7.54