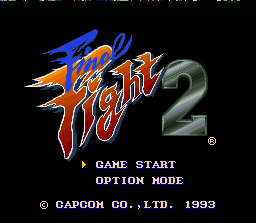 Final Fight was such a successful game that a quick sequel was simply a mandatory release sooner or later. However, Capcom no longer had the interest to produce any more arcade games under the Final Fight name or in that very style, not after the enormous success of Street Fighter II’s one-on-one action. The consumer division of the company fought for their ambition and released Final Fight 2 as a SNES exclusive. During the brief period of the game’s development, the producers of the game forgot a very essential part of the process: development itself.

It’s not a great day to be Mike Haggar. First, Guy’s fiancée Rena and her father are kidnapped somewhere in Japan, and Guy is nowhere to be found. It also seems that Mad Gear has regrouped under the wing of a new leader. Haggar feels it’s his responsibility to take down Mad Gear once again; he teams up with a friend of his named Carlos Miyamoto, and Rena’s younger sister Maki. The trio travels to Eurasia to kick Mad Gear’s ass and find Maki’s sister.

‘Twas the year 1993 A.D.... and Capcom couldn’t do better graphically, than this? I seriously doubt it. A simple case of loss of interest, maybe? As far as interaction, details and effects go, technically, the game looks exactly the same as the first one. Of course the backgrounds have been changed, but they’re just as static as before. The sprites look only slightly better and more natural than before. All the way, it feels like we’re playing the first game all over again, with different settings and a different set of characters. The music isn’t exactly horrible, but horribly boring. It seems the audiovisual department was working on something far more exciting.

I would’ve thought Capcom had the sense to tweak the control scheme even just a little, considering that this installment wasn’t based on an arcade game. This should mean more freedom to really utilize the strengths and diversity of the SNES controller, but no. They did make the A button the primary grappling button instead of X, but that’s it. No more tweaks to the controls or any element of the game. It’s still endless rape and abuse of the poor Y button, all the way. You have three characters to choose from, like in the original, true version of the previous game. Haggar’s still the same. He’s a bit more agile than in the first game, but still stiff as a brick when it comes to more intense combat and he’s unable to perform real combos. His moves have a very short range, too. Carlos is a ranged duellist, with his long feet. The extremely hot (in a cartoon-ish sense) Maki is the fastest and surprisingly the most efficient fighter in the bunch, but also, non-surprisingly, the weakest one.

The game’s rounds take place in different parts of Eurasia, a partly fictional continent created so that Hong Kong and European countries could be placed on the same continental map. Some of the presentation of these countries is quite interesting, but its irrelevancy with the game itself cannot be measured. No matter how hard they try to disguise this as a new game, the old quirks are still in and it brings absolutely nothing new to the table. The special personal space moves and the loss of one’s own health when they connect, the stiff and dated control scheme, the awkward progression, the ridiculously simplified boss fights that have no trace of the concept of something called man-to-man... these are just some of the things that remind me a bit too much of the original game’s problems, especially those of its alternative versions, which I have personally become more familiar with in recent years. The game isn’t frustrating just because it admittedly turns out quite difficult after just a short while, but also because it is damn boring and doesn’t show any development in any possible meaning of the word.

Final Fight 2 is a quite challenging game in its own style. But, what’s more challenging than the game itself is to enjoy it without thinking of recycling once during the whole ordeal, another lengthy round of button raping action. More lives and continues to consume this time around, and some sort of more frequent checkpoints throughout the game, which are probably the most relevant additions to the gameplay experience. They also bring some wanted ease into the fray, along with the co-operative mode which was missing from the SNES port of the previous installment.

The game is not a totally bad way to pass the time when there’s simply nothing else to do. Playing the original game on the SNES might not be as fun today as it used to be, but playing a carbon copy with all of its faults carried over is something even less enjoyable. Capcom had a very potential chance to expand the Final Fight experience when they began to create an installment exclusive to home, but they blew it by thinking in numbers and not worrying too much about the actual end result. A shame, really.

The boss Rolent was a boss in the original arcade version of Final Fight, in which he was named Rolento. He was omitted from the SNES version of the game, along with the whole Industrial Area stage.
Signed by Kuzpo klo 12.05