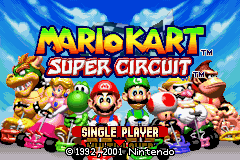 The Game Boy Advance had been out only a few months when it was graced with the first-ever handheld Mario Kart game. Purists who disliked Mario Kart 64 were once again on the march, criticizing the game as just another needless remake of perfection before it was even released. Mario Kart: Super Circuit is an essential, comfortable port of vintage Mario Kart even purists can't bash, but like most handheld installments, ports and versions of classic games, it gives and takes.

The gang's back on the road

I can't think of much things that haven't been said about Mario Kart in the past. Do you really think the basics will ever change? No, and that's a good thing, it really is. It's the kind of concept you just can't execute better, you can only modify it a little, and make it look fancier. It's kind of pointless to start comparing Super Circuit's graphics to Mario Kart 64... until you realize they actually look better. Seriously, Intelligent Systems' all-over cartoonish style is much better and easier on the eyes than the pseudo-realism Nintendo's development team tried to accomplish with the tracks in Mario Kart 64, which radically contrasted the cutout characters. The game looks really nice, and it sounds really nice, too. The music composed by Kenichi Nishimaki - best known for his work on RPG's, including the Paper Mario series - is great, and really captures the Mario spirit. Sound effects are present, but voiceover samples were mostly left out this time around - some are recycled from Mario Kart 64, but luckily with caution. I really had my fill of the samples in Super Mario Advance.

So, Intelligent Systems make their debut as the main developers of Mario Kart, but the game hasn't changed at all. It's like a mixture of both previous games. The tracks, and the variety of weapons and power-ups is close to, but not exactly like the ones in the original game, while the cast of racers is exactly the same as in Mario Kart 64. Those who have read the earlier Mario Kart reviews know who I'm rolling with, even if character ratings (speed and weight) that are sort of carried over from Super Mario Advance kill my buzz - Bowser's definitely the slowest of all racers. Ah, who cares, really? He rules.

The controls take some getting used to due to the limited control scheme of the Advance, but they turn out pretty much the most fluid controls in the series. Sharp curves are much easier to manage than in the earlier games, and there's a feeling of more precise and comfortable control all the way.

I'll try to wrap this all up rather quickly, since the basics really haven't changed at all. The great basic concept of 1992's Super Mario Kart still works, and there are virtually no changes to it. However, the game has one notable high point, as well as a notable low point. The high point is that whenever you win gold in a cup, let's say Mushroom Cup, and have collected 100 coins during the tournament, that particular cup from the very original Super Mario Kart is unlocked for free use in any single-player game mode. That means there's a total of 40 different tracks in this game. As long as your enthusiasm for the single-player mode lasts, you'll have fun...

...Yet, the multiplayer game is a disgrace. Duking it out in multiplayer used to be the reason to keep playing Mario Kart. All of the classic multiplayer modes are here - Mario GP, VS and Battle - but the handheld format brings in limitations to the multiplayer experience. There's a new mode called Link It Up!, which allows four players to use that limited and awkward link cable to connect their systems. However, this mode only allows Mario GP, four different tracks and different coloured Yoshis to be played. It's useless, since the other four-player modes have more options. Playing either one of the classic modes which allow four players (VS and Battle), on the other hand, just simply doesn't feel the same, everyone's staring at their own system's screen, sitting ass-to-ass to each other... the mere thought doesn't work for me. You need some personal space, for swearing, playing mind games, swinging your fists and whipping out a powerdrill to work on your controller. That's what multiplayer's all about.

Even while the multiplayer, an extremely large part of the true Mario Kart experience inevitably fails to impress me on a personal level, Mario Kart: Super Circuit is a damn good game, equipped with surprisingly good A.I., good controls and perhaps a better single-player campaign than in any other game in the series, including the ones that came later.

Nintendo Power ranks Mario Kart: Super Circuit #173 on their list of the Top 200 Nintendo Games of All Time.
Signed by Kuzpo klo 4.03