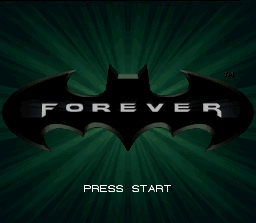 Perhaps to avoid notable differences in gameplay and overall quality changes between different versions of the game, the sole video game publishing rights of 1995’s Joel Schumacher film Batman Forever were given to Acclaim Entertainment. Having worked with Midway on Mortal Kombat on two previous occasions, Acclaim figured it was a great idea to utilize the Mortal Kombat engine from the first two games and add in small fragments of the SNES version of Batman Returns, to come up with a winning formula for Batman Forever. Something went very wrong along the way.

Riddle me this: just how bad can a Batman game be?

Batman and his new protegée Dick Grayson, a.k.a. Robin, take on former lawyer Harvey “Two-Face” Dent, who recently fled Arkham Asylum, and a crazed, bitter scientist who calls himself The Riddler.

When the first two Mortal Kombat games came out, the motion capture technology combined with fully digitized characters looked awesome. Something went wrong with Batman Forever, or maybe they just hurried, I don’t know. The digitized character sprites in this game are sloppy, grainy and totally detached from the environment, like paper cut-outs. The environments are bland and boring. Each stage differs from the last, yes, but repeats itself from the beginning to the end. Every stage looks like two or three rooms, copy-pasted over and over, as if the gameplay itself wasn’t tedious enough. The ambient music sounds OK for the first two minutes, but starts to taste like crap quicker than you can say “Jim Carrey” – it doesn’t change much, if at all, during specific stages.

The stiff, complex, totally awkward, hell, plain weird controls and the common interface which is like a bad Mortal Kombat game on survival mode say it all. The game SUCKS ASS! The gadgets are there for show, you don’t do hell of a lot with them. The grappling hook, of course, is an important item, but infamously difficult to use. The game is one endless button mash, they tried to make it LOOK like there is something else to it with the grappling and the retarded “riddles”, which won’t take a Bruce Wayne to figure out and usually just give you tips on the locations of health items or gadget blueprints. But, there really isn’t anything else.

On top of all, there are no continues at all. The game is so fucking boring that you’ll stop caring after only a while into it; when you stop caring, you get your ass kicked, lose your pathetic five lives, and voila, you go back to the very beginning of this filthy waste of cartridge capacity. No passwords, no battery, nada. Trust me, if you have any respect towards gameplay at all, you won’t try it again.

You want me to say something nice about the game? OK. Each enemy has a unique name. You can try memorizing all of them, if you want to enjoy some feature of the game to some extent... or not. The environment and interference of other enemies can still spell the demise of certain thugs, like in Batman Returns. There’s a co-op mode for two people who want to commit mental suicide, but the competitive multiplayer mode allows Batman and Robin to beat the living shit out of each other as well as enemies. Now that’s somewhat amusing.

What? Challenge? The only fucking challenge is to fucking take all the boring, half-assed, repetitive crap this game throws at you in the form of pathetically slow and no-can-do type of controls and the ridiculous loading screens (what the hell are they for, anyway?), keep even the faintest smile on your face and try to keep your five lives intact as long as you can.

Batman Forever... perhaps NEVER? You know, I rented this game from the local video store when it was new, and I kind of liked it. What the hell was wrong with me back then? How blind can a fanboy be? This game reeks as far as you can throw it. If you’re a very, EXTREMELY hardcore fan of the Batman franchise, or can’t get enough of old school beat ‘em ups no matter how much they stink, go ahead and try the game, but do not, for the love of everything that is unholy, expect miracles. Better yet, don’t expect anything. That’s the only way to avoid a disappointment.