REVIEW - Bubsy in Claws Encounters of the Furred Kind (1993) 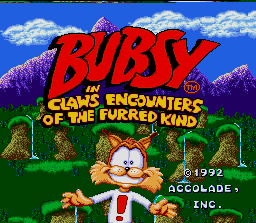 Let’s take a look back at the greatest platformers of the late 80’s and early 90’s. The Mario Brothers. Sonic the Hedgehog. The more action-oriented Castlevania, and Mega Man. What did mark these games? What made them so good? Excitement. Innovation. Great gameplay. Companies that were still struggling for survival in the early 90’s figured that having a flagship platformer is mandated for a company to automatically rise to prominence. One of them was Accolade, that was mostly known for their lackluster Test Drive series. They had Bubsy, the eccentric, anthropomorphic bobcat. Nintendo, Sega, Konami and Capcom thrive, so where is Accolade now? I’ll tell you. In the late 90’s, Accolade’s sales dropped by a heap and the company was eventually bought out by Atari Games. I’m willing to bet my ass that this damn bobcat had something to do with that. Excitement, innovation and great gameplay are just a few things the Bubsy games completely lacked.

“What could possibly go wrong?”

“What could possibly go wrong?”, Bubsy the Bobcat irritatingly asks as he sets out to rid the planet of Woolies, creatures from outer space that have come down to Earth to steal the people’s yarn ball supply. Bubsy is especially annoyed by this debauchery, as he’s famous for owning the largest collection of yarn balls in the world.

“What could possibly go wrong?” Well, the graphics are OK, just what you’d expect from a standard 16-bit platformer. Very colourful and should appeal to kids, at least those crazy and ignorant enough to actually enjoy the game. The music is enfuriating and Bubsy’s voice samples... well, ever heard a power drill going on for a straight hour against asphalt on a 20 meter radius? You’ll get the picture.

“What could possibly go wrong?” I’m really, truly at a loss of words here. You’d like to think it’s just a standard platformer, it can’t be that bad. Well, yes it is, it IS that bad. When I first tried this game, I did, as a matter of fact, think that it’s a decent, basic platformer. Nothing out of the ordinary, but perfectly playable. After the first ten minutes, which were kind of fun, the game’s true nature hit me smack in the face, kicked my ass and returned for seconds. Well, the basic idea is extremely basic: jump around and gather yarn balls of different colours – they play a similar part as Mario’s coins, which is no surprise at all – and just jump on those Woolie bastards to dispatch them. Basic, easy... kinda fun. Then, the calamity begins.

“What could possibly go wrong?” There is an extreme amount, and even that is an understatement, of leaps into a perfect unknown; slightly incorrect timing, or incorrect position, and snap! You’re dead! Most times any jump will lead you straight into a head-on collision with an enemy. Snap, you’re dead! There’s simply one single chance, not for a perfect, but a correct jump alone. One damn piece of platform you can safely land on at a 100% certainty. If you miss it – you guessed it – snap, you’re dead! If you didn’t figure it out already, one hit of anything kills you... and to be frank, you don’t even have to be hit. You simply don’t KNOW what damages you and what doesn’t. Checkpoints turn out often, but they’re not much of a help in the long run. If you haven’t played the game, lucky you, you can just imagine any Sonic game being as unfair and you’ll have some idea about the awful gameplay. The game is just as fast and hectic as Sonic the Hedgehog – it’s an obvious influence – but the speed was one of the classic’s best qualities, here it’s one of the worst. At least Sonic had those damn rings to protect him. The most ridiculous thing about this game is that you can actually die by falling from heights. Name one other animated platformer that this kind of crap happens in! The fatal height seems to vary, too. You can use Bubsy’s gliding ability to eliminate some falls and the 50/50 leaps, but even gliding doesn’t prevent you from hitting something you never thought to be fatal in any game before slapping this bitch of a game in.

“What could possibly go wrong?” ...And now we get to the worst part of dying in this game, Bubsy’s bad voice sample uttering that same sentence over and over and over again, after each unlucky leap. You’ll probably hear it about half a dozen times a minute, if you don’t come prepared... just what the hell am I saying? If you respect the art of gameplay, even the slightest bit, nothing in the world can prepare you for this fucking error in judgment that is called Bubsy in Claws Encounters of the Furred Kind.

“What could possibly go wrong?” Yeah, it’s a difficult game, of course it is – but is it really CHALLENGING in the true meaning of the word? No. Uh uh. Bubsy is only (and I mean O-N-L-Y) frustrating; a complete, utter, one hundred percent fuck-a-doodledoo waste of your precious time. And money, if you’re ignorant and/or resilient enough to get even the crappiest retro games money can buy at amounts Scrooge McDuck would have a heart attack over.

“What could possibly go wrong?” Well, just about everything, Bubsy old chap. From my standpoint, all the patience in the world wouldn’t be enough for this game. It’s irritating, hectic and frustrating, and it gives nothing, absolutely zilch, back to the player. The main character’s shitty, too. Luckily Bubsy was one of those platformer “phenomenons” that came and eventually went... after a couple of even worse sequels, of course, ‘cause this first game sold quite well. Back when the game was new, I read some reviews in which the game was actually praised; the game got 89 out of 100 in my favourite local magazine, which I might have mentioned a few times as being very, extremely stylish, but as we can see in this case among others, their reviews were sometimes far off the mark. Seriously, what is wrong with people that actually enjoy this game, or its sequels? This game is fun for 10 minutes. That’s 5+5 fucking minutes. The rest is, as the Nerd would put it, a shitload of fuck. I can only wish this game would make the Nerd’s personal shitlist some beautiful day, so I could see him toast the cartridge, flush it down a toilet or whatever he comes up with in relation to the game itself. A little tip: cats are known to do severe damage to any items in the household, and they have endless imagination.

a.k.a. Bubsy, Bubsy the Bobcat

The character of Bubsy was officially promoted by many sources as the “new Sonic the Hedgehog”. On a personal level, this snippet of information makes me sick.

The game spawned an animated series starring Bubsy the Bobcat in 1993. The series was cut short - only the pilot episode aired.
Signed by Kuzpo klo 2.32