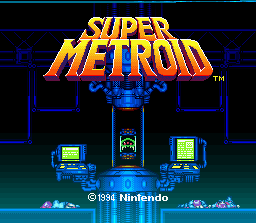 During the decades I’ve been able to call myself a serious video gamer, no 16-bit non-RPG has captivated me quite like Super Metroid. No other game has glued me on the screen playthrough after playthrough quite like it. Our third journey in deep space –  in the ever so hot boots of the ever so hot Samus Aran – is a timelessly enjoyable action title, in which we’re trying to save an individual Metroid instead of attempting to render the whole race extinct. We do that to some of the greatest music and atmosphere created for a 2D action-adventure. So what the hell are we waiting for?

The one to show the way, the one that’s still the best

Mercenary Samus Aran receives a distress call from the research facility she left the lone Metroid hatchling in for the finest scientists in the galaxy to study, after saving it from SR388. Samus finds the place in ruins, filled with dead bodies courtesy of the space pirate Ridley, who steals the Metroid hatchling. After a narrow escape from the collapsing facility, Samus returns to the dreaded Zebes system to put an end to Mother Brain and her space pirates’ operations.

Remember the era Super Metroid was released in? Good. Keep that in mind. The interiors and landscapes have a slightly rough and blocky edge to them, but character design at the very least is good, stylish and creative. The bosses look extremely nice, even if the same rough edge remains in terms of their movement. Samus is well crafted in both movement and detail. There is a certain feminine vibe to her dynamics, which makes the reality of her gender so much clearer, and I like the detail that whenever she stands still, we can see her breathing heavily. Can’t complain, it’s ’94 and a 16-bit platform!

The sound... ohhh. The sound effects might start to get on your nerves a few hours into the game; there are not a lot of changes going to happen throughout, and all the bosses sound pretty much the same. What compensates for the lack of great sound effects, is a WICKED soundtrack which ranges from the atmospheric prog dribble of Brinstar to the apocalyptic choirs of the lowest planes of Norfair.

After the surprisingly impressive intro, we are thrown to planet Zebes with not much to our name; a pretty pathetic gun and the ability to walk are by far the only features available. After a quite linear beginning, Samus gradually develops so that we are able to explore Planet Zebes more freely – and it is one huge place. Towards the end, we see Samus’ artillery and inventory growing with items such as missiles, power bombs, a grappling beam, an x-ray scope... plus different suits, abilities, energy tanks and beam guns, which all play a part in her success.

Trying to find all the secret items and areas on Planet Zebes is fun, to a certain extent. Some players might find running back and forth on this huge planet searching for something that might not even exist – but you just have got to know what lies in that gap on the map! – tedious. For the record, my personal highest rate of finding items without any additional help is 92%, so don’t smash your head against a brick wall if there’s an additional missile pack or something you just can’t reach. It hurts.

Your success largely depends on a thorough search of the map. Like I said, you don’t need to find every single item in the game, but you should however explore every corner of the map, especially if you see an item – they’re marked with dots – because it might be an energy tank or something else that might improve your performance dramatically. All in all, the game’s not too difficult in my opinion. It gets frustrating at times, especially those times when you’re busting your ass to find that one key item you need to proceed, and 99% of the time it’s in the last place you search. It might also get a bit tiring during long sessions, but I guarantee that if you’re patient enough to finish the game once, you’ll play it again.

Even with all of its many minor issues, Super Metroid is one of the best, if not THE best action game in the glorified history of the Super Nintendo Entertainment System. After all, it captures the magic of simple exploration in all of its ups and downs, holds true to the strong backstory – to which it gives a hell of a lot of depth – and does it all to some killer music. This review is quite vaguely written for a reason; those who have played the game know why it’s great, those who haven’t need to experience it for themselves. I’ll say one more thing, though: forget Metroid Prime. Metroid needs to be in 2D, and this particular game is a premium example why that is.

Nintendo Power ranks Super Metroid #12 on their list of the Top 200 Nintendo Games of All Time.

Metroid’s creator Gunpei Yokoi – who only produced this particular game instead of directing it – passed away in 1997, which makes Super Metroid the last Metroid production with him on board.
Signed by Kuzpo klo 13.26