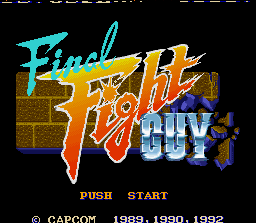 Be prepared for a long prologue here. The SNES made its way to Europe in April 1992. I had... hmm, an acquaintance, through whom I had already gotten familiar with many games that are considered classics, of numerous genres. He was the first guy I knew to own the SNES and needless to say, he became the most popular kid in my neighborhood for a while; he was an asshole and still is, but it didn’t matter ‘cause he had the hottest shit in the world plugged into his TV, and he knew it. His mom – only hell knows where she got all that money – bought him about two dozens of games during the system’s first couple of months of European existence, and me and my best friend (at the time) went over almost every day and played new games like there was no tomorrow. One of our favourites at the time was called Final Fight, which my friend also bought once he got his own SNES – I got mine about two or three years later, after all my family didn’t quite thrive, financially, due to the nation-wide depression. Final Fight was Capcom’s first arcade fighting game to be ported to a home console, and it was quite a hit. It was quickly overshadowed by the arrival of one of the company’s milestones, the home console version of Street Fighter II, but it is still hailed as one of the most important arcade-style beat ‘em up titles of the 90’s. Released on the SNES just a couple of months prior to Street Fighter II, Final Fight Guy is a Japanese re-release of the classic game which stars Guy, a character formerly exclusive to the arcade version, in the place of the original’s main character Cody. It’s the most radical change in the whole game, so it’s basically the very same installment with just a slightly different plot. If anyone cares about the plot, that is... LET’S RUMBLE! ...Or let’s not?

That guy. You know, that guy? Yeeeaaah, that guy!

Former professional wrestler, now Metro City mayor Mike Haggar is blackmailed by a local gang of thugs calling themselves Mad Gear. The gang seeks control over Haggar and kidnaps his daughter Jessica. Refusing to give in, Haggar sets out to rescue his daughter together with a modern day ninja only known as Guy.

Extremely basic graphical presentation of the arcade beat ‘em up variety; what separates the home version from the original arcade is that there are far less effects and the maximum amount of enemies on screen at a time is limited to three. The framerate is therefore even surprisingly good, there’s not a lot of twitch. The backgrounds are quite boring and static – I have played the original Final Fight arcade game, and I must say a lot of stuff was needlessly stripped out; the SNES would easily have been able to process a lot of minor, yet noticeable graphical elements missing here. The music is very good. Since this is a Capcom game, you might expect tracks on par with the music in the Mega Man series and especially Street Fighter II, and the game cashes in quite well on this front.

The game’s level of playability pretty much depends on the version. The original Final Fight was a marvellous arcade game in its time, and the home version was also relatively addictive. Ah, who am I kidding? We could spend hours playing the game with my pal; today, something like that would be out of the question for me in the whole genre. I’m “in the mood” if I can play one beat ‘em up more than 30 minutes at once. I know the plot doesn’t really matter at all in a game like this, but even so it would be nice to understand what’s going on. Well, can’t blame the game of the fact that I can’t understand a word of Japanese. What I did figure out, though, when I first played the game, is the fact that it’s the very same Final Fight from all those years back. There’s just one less character, and that character happens to be my favourite and the most balanced one in the first game, Cody. What we’ve got is Haggar, who is basically awesome, but considering gameplay, he’s slow and very straightforward. Then we have Guy, no more than a backup in the arcade game; everybody used Cody or Haggar. Now he steals the spotlight on a home console, and like in the arcade version, he’s fast, agile and has a neat array of combos, but he’s weak. Top the weaknesses of the characters and the dated gameplay off with extreme difficulty very common in Japanese games, and you’ve got yourself a perhaps decent, yet very frustrating and lacking game.

What’s total shit is that they had six action buttons at their disposal. Yet, Capcom decided to go for an arcade feel, I guess, by utilizing just two of them: Y and B. Y is used for all combat. There’s an alternate way to grapple an opponent using X, but it’s very unpractical. B is used for jumping. Guy has got a few moves, he usually follows up to a regular attack with a powerful combo, while Haggar relies on quality over quantity, using his arms as kind of hammers. Pretty often you pull off a Haggar combo where he grabs the opponent and smashes him or her on the ground with amazing force. The thing is that there’s nothing challenging about executing these combos. They’re very random and usually take place amidst all the button mashing going on. Oh well, at least the controls are responsive in compensation of being so damn dull. Timing of your punches and kicks is pretty much everything that matters to you in the long run, and sure, it’s quite difficult. Both of the characters have a special “personal space” move executed in the classic way, by pressing both Y and B at the same time, but as in most games, this consumes your character’s own health, which is scarce as it is, as well.

Your character’s health is indicated by a vintage Capcom health meter immortalized by Street Fighter II. Notice what happens when someone lands the first punch on your character’s kisser? You lose a ridiculous amount of health. Yes, once again, this is a Japanese game: that spells out HARD. Since Guy is so fast and his combos are pretty unforgiving, enemies can’t counter too easily and therefore, ironically since he’s the weaker character of the two, Guy lasts longer than Haggar who might have all of his lives drained out by the end of Round 2. Luckily you have three chances to continue, and each time you do, you’ll be able to switch characters. Good thinking by Capcom on this one.

There are about 20 different regular enemies in the game. They all use unique attack patterns and some of them have a lot more health to lose in your hands than the next guy. Their patterns don’t matter a lot; just check the correct timing with each guy and gal, and let your thumb rip the flesh off their bones. Some of the enemies drop weapons for you to use, which are picked up just like any “power-ups”; most of the power-ups just add to the score, except for food and a rare Jessica icon which makes your character invincible for a short period of time. The weapons include knives, swords and lead pipes. They are damn difficult to use – you will have problems hitting the enemy even with the most focused swing of a blade and weapon use in general leads to bad timing on your part, most of the time. You’ll get your ass kicked with even more certainty whenever you use a weapon. How ironic is that? Well, at least since this is a bonafide, uncaring and uncensored Japanese title, there’s some blood spilt when you use a knife on an enemy. Blood always saves my day, regardless of the context.

There’s a sort of minigame adding to the score, in which you’ll need to use everything at your disposal, meaning weapons and your physical abilities, to smash up a gang car, just for the fun of it, I guess. This is more than a little reminiscent of the bonus stages in Street Fighter II.

The bosses are a collective bunch of damn pussies that never come alone. There’s always someone or something watching their back – whether it’s a huge fucking sword that the player, for some odd reason, seems to have trouble using, whereas the boss uses it as smoothly as a Chinese chef uses a cleaver – or an equally strong ally, or a whole freakin’ gang. The sword wielding boss, Sodom (cool name!), uses an unique attack pattern that can’t be responded to or countered in any way with the control scheme bestowed upon the player, he’s fast as a cat and his armour feels like it absorbs every punch and kick. At least I find any kind of smart combat against him nearly impossible. I just abuse Y every time and see what happens. Usually I lose most of my lives doing that and the rest in the next boss, the Andore Twins, who are two tough sons of a bitch, and there’s no co-op mode so you’re on your own no matter how hard you want to believe in the mercy of gaming gods. This endless cycle of defeat is not my idea of the most fun game in the world.

The game is hard, but not very long, especially since one stage in the original version (Industrial Area) is still omitted completely. That means there are only five stages for you to complete. If you’re quick about it, and proficient in button mashing (uh, I don’t know how to define that, exactly), beating the game shouldn’t take you more than 25 to 30 minutes. Some of the bosses bring in a fair share of trouble, or rather their butt buddies. Good timing and a bit of luck are keys to success.

Final Fight Guy is a perfectly needless re-release of a dated, once good home video game. I’ve seen better, but well, in the game’s defense I’ve also seen worse – a lot worse. I miss the arcade game and most of all, Cody. I don’t understand why the Japanese pushed out the most balanced character from the original game and put two playable characters with notable weaknesses into a game that’s already frustratingly hard in itself. Those crazy Japskees.

Nintendo Power ranks the original home console version of Final Fight #157 on their list of the Top 200 Nintendo Games of All Time.

This version of Final Fight was released in North America in 1994, as a rental exclusively available in Blockbuster chain stores.

Mad Gear (the name of the enemy gang) is the Japanese title of a Capcom racing game released in 1987. The game is known as Led Storm in North America and Europe.

The Andore family was modelled after professional wrestler Andre the Giant, who passed away in 1993.
Signed by Kuzpo klo 11.59