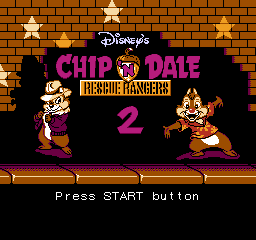 During the last dying days of the NES and some time after the final Rescue Rangers episode had aired everywhere in the world, Capcom released a sequel to their 1990 hit game based on the successful cartoon. As expected, the game was a commercial failure and on top of that, it didn’t fare too well in the media either. DuckTales 2 was by all means a great effort by Capcom despite a similar late release, and both commercial and critical fate, but the second 8-bit mission of the Rescue Rangers really is a disappointment.

Fat Cat busts out of prison and steals an ancient, haunted artifact known as the Urn of the Pharaoh to take over the world. Chip and Dale, with some help from their friends, take it upon themselves to trap Fat Cat in a corner and put an end to another evil plan devised by the feline felon.

Most people I’ve conversed with in regards to the game say that it looks far superior to the first one. I dare to disagree and rightfully so. It’s similar, but even less detailed and kind of rough, especially the sprites that seem kinda “incomplete”. The music’s a little less irritating, not excellent but not too bad either. Once again, couple of tunes could be ripped straight off Mega Man, and one of them plays in the final stage, which actually looks like a stage in Mega Man!

How can I say it without sounding stupid... well, here goes, anyway: Capcom fixed a lot of stuff that didn’t necessarily need to be fixed. You can now throw items in five different directions, the game is pretty much as non-linear as the first one, and it’s spiced up with several “humorous” conversations between the characters to make it look like a generic episode of the show. The dialogue is awful; damn, damn bad. But, the game is still for kids. Therefore the written conversation needs to be simple and readable, I understand that so I won’t criticize it too much. Bringing in non-linearity to the game is the choice of route. However, in this game you need to do everything in the game to get clearance to the final stage and beat it, so you can’t skip any stages unlike in the first game.

The level design is quite interesting. Most of the stages are straightforward platformers in the style of the first game, while in some you’re given a time limit and in some, you need to manouver a transportation device. Nothing too difficult, I assure you. The boss fights have undergone the most major and most welcome tweaks. They’re not nearly as easy and simple as they were in the first game, in this one most of them require you to keep moving all the time and you’re given very narrows windows of opportunity to attack. You will need to observe the boss’ movement and vulnerability before doing anything decisive. A quite common offensive strategy in the game’s boss battles is to use their own weapons against them.

A bonus stage pops up after each main one, like in the previous game – there’s a different one for multiplayer, but I haven’t even tried co-op mode in this game, so I can’t comment on that. This time you have to use the rubber ball from the first game to hit 1-Up stars which soar across the screen. You get only one chance to do this and there’s a ten second time limit. This time, gathering R/R icons, which replace flower icons, isn’t just for fun; a certain amount of them adds up to an additional heart in your health meter after the stage is over. I can tell you: go for them! ...Or you won’t survive the end.

There’s a lot about the game which more or less annoys me, but three things stand above the rest – and they’re all connected to jumping, which wasn’t a problem at all in the first game. Apparently, it wasn’t a platformer enough due to the lack of some well timed manouvering. Well, they “fixed” this problem by adding in a bulk of bottomless pits, as well as other jumps in which timing is the most important, hell, only key. Not good! Why not just keep to the good old formula? Also, due to the fact you can’t backtrack, there’s no parallax scrolling (kind of weird for a ’93 game), vertical platforming turns out much more dangerous. When you reach the top of where you’re going, one missed jump can send you back down, to your demise, even if the previous platform is just half an inch off the bottom of the screen. Sometimes, you might even accidentally descend onto a lower floor which has already been passed, due to one badly timed push of the wrong button, and the result is the same.

The ending of the game is something I also have to mention. It comes too soon, and it sucks. Seriously. Balls. You’ll very likely say out loud: “THAT’S IT?!” Check out for yourself. The game itself is somewhat trickier than the first one, due to some really hectic locations, the problems with jumping and a couple of the boss fights might actually give you grey hair. However, once you get the ultimate hang of the game and learn to resist its quirks, it’ll be over in less than an hour, just like the first game. Too bad it isn’t as fun.

Chip ‘n Dale – Rescue Rangers 2 is a good platformer, but the thrill of the first game is gone. The bright side is that although the unnecessary dialogue sucks chipmunk bollocks, the theme of the license is presented slightly better, and the boss fights are more challenging and fun. On the downside, the annoying changes to the importance of platform jumping and the shitty ending ruin a lot, including any desire for a replay.

The game was released in Japan in December 1993, almost exactly three years after the original North American broadcast of the show’s final episode.
Signed by Kuzpo klo 8.08