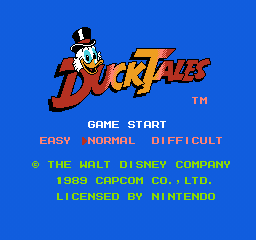 In 1987, DuckTales brought Disney’s cartoons to syndicated primetime, and very soon became one of the most accomplished cartoons of all time. In 1989, Capcom signed a contract with the Walt Disney Company to develop and publish a platformer based on DuckTales, which turned out one of the most essential NES platformers altogether. Capcom and Disney continued to co-operate on a few more stellar games in the future, but they never did quite surpass DuckTales.

Not pony tails or cotton tails but DuckTales, woo-oah!

Scrooge McDuck and Flimheart Glomgold are at it to become officially crowned the richest duck in the world. To receive the prestigious honour, they challenge each other to discover the five mythical Lost Treasures of the world. Scrooge’s quest for gold and honour takes him and his co-operatives all the way from Amazon’s rain forests to the surface of the Moon.

The graphics are pretty much the best the NES can do, and the original North American version of the game was released in 1989; think about it! However, the frame rate’s pretty twitchy, probably due to this very wide variety in colour and detail. The evergreen DuckTales theme song turns up, of course it does, and the original music by Yoshihiro Sakaguchi is excellent. Some of you probably know the same guy worked on the first two Mega Man games, and just like the game itself, the music reminds me a lot of Mega Man.

As a kid, I never really noticed how alike DuckTales and Mega Man are from certain standpoints. The title screen alone echoes of the Blue Bomber. You get to choose between five stages – the Amazon, Transylvania, African mines, the Himalayas and the Moon – from the very beginning and beat them in any order you wish, the game is perfectly non-linear. To proceed in some stages, you need a key item. Even if it can only be found in another stage, you don’t need to stray from your non-linear fashion; you’re automatically taken into the other stage, and you must stay there just as long as it takes you to find the item you need, then you’re returned to your original location. You can also leave any stage you are in once you meet your “trusted” (I’m a fan of the show...) pilot, Launchpad McQuack. Like in Mega Man, getting through all five stages isn’t the end. You’ll still have to beat one more stage in which you’ll butt heads with the final boss.

Besides the few key items, some elements of the game steer away from your regular, everyday platformer, and make it feel more like a certain type of an adventure game. In some stages, thanks to their complex structure, you can do minor sidequests which involve helping Scrooge’s several relatives and other allies in their time of need, and there are two secret treasures in the game which have a small effect on the ending. Yes, there are two different endings. They don’t differ a whole lot though, it’s literally only a matter a few pixels in fact, so don’t cry if you don’t find everything.

Unlike Mega Man with his dozens of weapons, Scrooge only has his cane... but what a cane it is. You can use it as a golf club, in other words swing rocks and other stuff you find scattered around at enemies – or as a pogo stick, which is the best method of offense at your disposal. It makes your jumps much higher and will also get you past many obstacles such as spiked floors. It’s moderately hard to use, though, and it might fail from time to time, forcing you to land on your feet – you really have to focus on pressing Down + A + B all the time. Depending on the situation, the mishap might turn out fatal. These common mishaps are at their worst when fighting bosses and hopping along long stretches of spiked floors.

Here you have the choice of taking on a moderately tricky platformer or take the “tricky” to the max with a tougher difficulty level from the get-go. The difficulty of the game is up to you to a certain extent. The difficulty level has no effect on the end result. Overall, the game’s not too difficult either way, despite the formidable challenge brought on by at least two out of five stages.

Everybody! “Life is like a hurricane here in Duckburg! Race cars, lasers, aeroplanes, it’s a duck blur!” No? Tough crowd! DuckTales is still one of the best Disney games of all time, if not the best, and a timeless, entertaining platformer in every other right. As a DuckTales fanboy, I find myself returning to the game more often than I really need to. The controls are occasionally rough and difficult to learn, but you’ll see soon enough the game isn’t just an audiovisual cartoon treat for kids.

The cartoon series DuckTales premiered in 1987 and ran for three years, divided into three seasons.

The game was released in North America a year and three months before it finally saw daylight in Europe. By that time, the show had already been cancelled in the U.S..

In 1990, Disney released the action-adventure DuckTales: A Quest for Gold on several home computer systems. Although it was released around the same time as the PAL version of the NES game, the games are not related.
Signed by Kuzpo klo 10.09