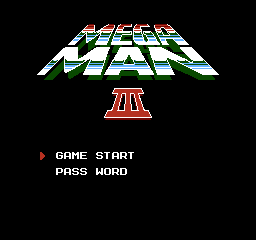 After the surprise success of Mega Man 2, Capcom felt quite comfortable with their new franchise and spent two years working on Mega Man 3, their most ambitious video game project yet. The tweaked gameplay, the now legendary characters and the game’s length made it Capcom’s ultimate breakthrough with an original franchise of theirs, and Mega Man one of the most popular video game characters in the world.

Since his second attempt at world domination, Dr. Wily seems to have changed his ways completely. He returns to work on a gigantic peacekeeper by the name of Gamma, together with Dr. Light. Eight battle robots designed for the same purposes as Gamma go haywire and make off with crystals needed to operate it. Mega Man is sent on a job to retrieve the crystals, together with his faithful, transforming robot dog Rush.

I’m sorry to say there are two sides to this game’s visual presentation. Clearly Capcom made huge efforts to make the enemies, effects and backgrounds look big and fabulous, and capped the great level design with very innovative obstacles and traps. However, there’s a lot happening on screen and that has an effect on the framerate; it is, at times, downright horrible. Intense battles suffer because of that, especially those in which you’re surrounded. You’re going to have a lot of trouble just because the screen and your character don’t move as fast as your thought. The music, on the other hand, is pretty much perfect. Bun Bun (a.k.a. Yasuaki Fujita) makes his Mega Man debut, and with style, all the way from the title screen to the end. Excellent work – the composer’s loyal to the style of his predecessors, but still comes up with a lot of new, tight material in the genuine Mega Man spirit.

I guess the basics need no further explanation, but here we go again. You clash through trap-laden stages, smash eight robots to bits, and proceed to the final stages to take care of a few more... but this time there’s a small twist. This time, you first take care of the main bosses, then an extra boss, then you go to the first survival sequence in altered versions of four of the game’s main stages. Whew... had enough yet? Too bad. You’ll still have to go through the final stages, in which you will not only encounter some additional bosses, you’ll also have to bear a second survival sequence... or die. Then, the final battle... s. Haha, they really went the distance with this one. One more survival sequence, who you’ll be facing is a secret – but I’ll just say you certainly don’t need to destroy all of the main bosses three times. Just wait and see, if you get that far.

The game is indeed longer than the previous two games combined, and maybe even more, and also the first game in which they at least TRIED to create some sort of backstory that makes sense. The added drama might throw some fans of the previous games off, but it was clearly the direction the series was to take after Mega Man 2, so I believe people were prepared for it. Other than all this, the game hasn’t changed at all. Mega Man has one new, very important physical ability, he is now able to slide through narrow gaps. You can change direction at any time during a slide, and this feature will prove useful in many sorts of situations. The only downside to it is that it’s very sensitive, much more sensitive than any other of the Blue Bomber’s moves. Sliding off a single block you’re standing on, straight into a pit, is not fun. The most major addition to the experience is Rush, Mega Man’s dog, who serves as a huge update to the first game’s platform beam and the second game’s red power-ups. Rush gains more abilities in the very same fashion you gained the reds in the previous game, as bonuses after you’ve beaten a certain amount of bosses. Rush can work as a coil, a submarine, or a jetplane.

It was very hard to beat the previous game without the use of every single additional weapon and item in your arsenal. In this game it’s simply impossible. All of the bosses pretty much need a specific weapon to be used on them, and in the final stages, you systematically have to use everything to even be able to make progress in general. As ambitious as the concept is, the menu toggling it calls upon ain’t fun. Another thing that isn’t fun, is that if you happen to be in a stage in which you certainly shouldn’t be at that point, you won’t be able to exit before you lose all of your lives or reset the game. The password system helps out a bit, but it’s still frustrating.

In a few stages, you will go one-on-one against a mysterious robot who moves in pretty much the same way as Mega Man. Again, I won’t spoil too much, but I just mentioned this guy since he’s a remarkable part of the game. He’s very simple to beat once you learn the basic strategy, and his attack pattern never changes. The bosses in general are very hard; Shadow Man in particular has earned the reputation of being one of the bitchiest bosses in the Mega Man series. This is nice contrast to the previous games in which the bosses were relatively easy, while the stages themselves were very difficult. Here, everything’s in good balance. Again, there are a couple of bosses that look totally ridiculous – Spark Man looks like he’s a drunken lobotomy patient – but also a couple of the coolest ever. Gemini Man is king and Snake Man possibly my favourite boss across the board of the franchise.

Mega Man 3 is long as hell, there are literally dozens of boss fights and the password system won’t help you a lot once you reach the final stages – the final password will only get you as far as the base. So is the game difficult? It certainly is, one of the most difficult games in the whole series. It’s not impossible to beat, but it’s hell. Pure hell. As a game, it’s almost as good as Mega Man 2, but suffers from severe graphical problems and stuff that should’ve been thought of a bit longer, such as the use of the weapon menu and the frustration that comes with the inability to leave a stage in midway. Without all of these flaws, the game would very likely be the series’ crown jewel.