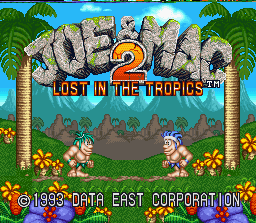 Joe & Mac’s SNES port was received well, and the eventual production of a sequel was quite obvious. However, the developers didn’t quite follow up on the “obvious” part and put the franchise on hold for a few years, which was very uncommon back in the golden era of quick sequels. Data East finally began working on a game exclusive to the SNES; this gave the developers certain freedom to steer the franchise further from its arcade roots, add in elements from adventure games, and improve the level design. The end result is a decent platformer – however, what it’s spiced up with is more like a bundle of different prototypes of features than a solid part of the game, and the whole thing’s longevity really isn’t from the highest end.

An evil caveman named Gork steals a special crown from the village of Kali, and the elder dispatches Joe and Mac into action. They need eight Rainbow Stones to build themselves a rainbow bridge across the river to Gork’s keep.

A cheerful-looking game with plenty of colourful, interactive backgrounds and wacky sprites. The bosses are a little more fleshed out than in the first game, and they’re made relatively realistic in contrast to the human characters, who are more like out of a comic book. The music draws way too much attention and it’s annoying to boot. The jungle rhythms start to pound on an endless loop in one’s brain already about ten minutes into the game.

I’ll start by saying that Data East apparently started out trying real hard to make the game an unique platforming experience, but I’ll bet they lost interest two or three days later. Joe & Mac 2 is certainly not a bad game, the fact that it’s incomplete just becomes apparent real quick. The level design has changed quite a bit. There are unique stages in which you need to move to all directions, there are different gauntlet stipulations from time to time, such as a huge molten blob of lava on your tail, or an incoming T-Rex foot which you have to dodge for a set amount of times while crossing a piece of land to do battle with the big ‘saur himself. Also, the game is totally non-linear from the beginning to the end. You can do the stages in any order you want. That’s probably why the difficulty doesn’t change at all during the game – the game is extremely easy. Seriously.

With these premises, it seems we’re dealing with a lengthy, difficult game; there’s a store in the village where you can buy items, there’s a password lady, an elder who tells you what to do next, a guy with a totally useless telescope to see what’s going on in some random places, and a travelling agent who allows you to return to your home village at any given time. But no, the game isn’t difficult. This is all just make-believe. You don’t even have to visit the Kali village more than twice: once in accordance to the storyline – you’ll get one effortless Rainbow Stone on this visit – and once when you need to return there to proceed in the game. From the store, you can buy flowers to present to a lady standing behind the curtain, who may or may not become your wife – it’s totally random. Useless, too; it only has a small effect on the ending of the game if she does answer yes to your proposal. What were they doing with this game? All this junk is absolutely a waste of good space! Also, since the stages are very short in length, the stipulations come in small numbers and once you’ve dealt with them, it always feels like “that was it, the big challenge?”.

Gameplay has changed a bit. You can no longer do the vault jump, but the other abilities are still intact although secondary weapons are now based on what you eat. For example, if you eat a large hunk of meat, you can spit out bones for a while. Red peppers become fireballs, fruit becomes seed etc.. All of the food, of course, replenishes your health at the same time. Added to the collectables are these large stone nuts which you can use as currency at the store – IF you can find something truly useful there, which I doubt greatly. Sometimes, animals show up to help in certain areas and you can ride them a lá Donkey Kong Country, but once they’re hit, they’re stunned and unable to recover. Usually they’re so big in size that they’re bound to hit something very soon. Some enemies have a really annoying tendency to block your hits, which is something you are not able to do and you sometimes need to bash their heads in for about 30 seconds before landing one single hit, there’s no proper way to break that annoying block. In these cases, you are usually being harrassed by something else at the same time, since enemies respawn like crazy, and the going can get really hectic because of these particular chickenshits. Again, not difficult, just frustrating – after all, the game is quite generous with health items, at least in comparison to the previous one.

The boss battles are visually intimidating, but let me tell you straight: they’re ridiculously easy. Some bosses have attack patterns that are quite impossible to survive unscathed, but what makes them easy to defeat is the fact that they’re weak as hell despite their huge size and it’s simple to find a position where the boss simply can’t harm you with his regular patterns. The only difficulty you might experience with nearly every boss in the game is, if you’re missing a projectile weapon. If you have one, all you practically need to do is sneeze at the boss and he’s gone. I don’t want to be the asshole who spoils everything, but I still gotta say that you’ll meet Gork, the primary antagonist, in battle three times. The first two battles are like mirror images of each other, the hardest boss fights in the game – but the third one which is supposed to be the toughest of them all by the looks of it is just as simple as any other confrontation in the game. I survived it on my very last legs, with my other hand practically tied behind my back. Where’s the consistency here? Oh yeah, and to spoil it all a bit further, in the last stage you’ll re-encounter every boss in the game, in their original forms, using their original patterns. Does facing them all at once, without power-ups make them any harder? No. I really don’t know what the main focus was when Data East was working on this game, ‘cause it seems that absolutely everything except for the very basic formula carried over from the previous game, including challenge was done halfway through and then left at that.

The game might feel hard at first, but it quickly turns out easy as hell once you’ve learned the basic moves, which isn’t too hard since there’s not a lot to go around. The non-linearity makes every stage a breeze, and even though the final stage was meant to be difficult, it isn’t. This really shouldn’t take long from anyone who’s played platformers before, and those in fear of some added semi-elements have absolutely nothing to be terrified about. Not only don’t they make any sense, but they don’t add to the challenge one bit, either.

IF done correctly, this game would’ve had a chance to beat the first one in every sense. Sure, I’m glad that the certain stiffness and unforgiving nature, and simplicity of the arcade is gone. The thing is that all the new features, which could’ve been fine, depth-increasing elements, are nothing but useless artificial quirks. All that’s worth something here is the basic platformer formula, and in that sense, the game is even more simple and basic than the first one. The level design is a bit more complex, but even that element of the game isn’t polished enough to fit a full-priced installment.