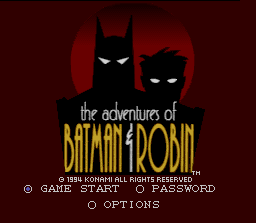 When the later two-time Emmy award-winning Batman – The Animated Series first premiered in 1992 on the heels of Batman Returns, it was obvious that it was going to get made into its very own video game or two at some point. Game companies were at the license like sharks, just like they were in the case of the two movies. The license was granted to Konami and Sega, companies responsible for commercially successful video game renditions of Batman Returns. The SNES and Genesis versions, totally different from each other, were audiovisual displays of power by both parties, but neither one really did quite well in the media and got a nasty swing of the critical axe. They were both received well by some fans of the franchise, however, due to their authenticity and loyalty to the animated series’ style. So, how is the SNES version?

Seven of the most notorious supercriminals of Gotham City – The Joker, Poison Ivy, The Penguin, Catwoman, The Riddler, Two-Face and Scarecrow – have all broken out of Arkham Asylum to unleash mayhem, and lure Batman and his trusted protegée Robin to unique deathtraps they believe are impossible to escape from.

This game has the one honour of being one of the best looking 16-bit games that don’t incorporate ACM or SuperFX technology. The look of the game is straight out of the animated series, the textures are perfect and the multi-dimensional parts of the game work beautifully. The music is a collection of official adaptations of Danny Elfman’s original soundtrack for the series... need I say more?

After a very strong start, the game suddenly disappoints, big time. Let’s go over the ups first, because there are a lot of them and I’m on a quest to prove that this game, as lacking as it is, should be tried at least once by any Batman fan. It IS very authentic, it’s like playing an action-packed episode of the show, or another animated movie. Actually, all of the stages and their different sequences are kind of jigsaw puzzles put together from pieces from actual Batman episodes. A very fine idea, which works like a charm plotwise. Some epic battles in the game are at the very least influenced by different events in the show. Yes, the boss battles are as epic as they should be. Damn difficult, though. A few personal notes: first, the order of the stages is all messed up. I mean, the Joker is definitely, without a doubt, Batman’s arch nemesis, the best villain in the Batman franchise, ever, and the most important one. So why is he the first boss? Also, on a higher note on my own behalf, I disagree with all the fans who criticized the game back in the day because they wanted Robin to have a more active role – the game was completed before the show was renamed to “The Adventures of Batman & Robin”, so it’s pretty logical – ‘cause since the beginning of time, the little asswipe has only been in Batman’s way! He’s a pointless sidekick, and that might be exactly why he was killed off in the good old Batman comics! God, I miss those. Batman rules.

Each stage is a unique scene set up by the boss, and usually reflects his or her persona. For example, the Joker is operating out of a fairground and Ivy’s gone wild in a park. The level design is simply awesome, and the graphical display of the game makes up an electric, hectic atmosphere. The presentation’s off the charts!

Sounds awesome up until now, huh? Well, I’m sorry. I apologize to you, and to myself. And perhaps the developers, too – since they tried, I know they did. At its worst, the gameplay might drive one to tears. The basic formula here is a combination of features and qualities from Konami’s previous Batman game, Batman Returns, as well as Sunsoft’s NES game from 1989. The wall kick makes its return, Batman’s basic movement is quite similar as in Sunsoft’s game, a bit sleeker though. A new ability for Batman is to grab hold of ledges and climb, to eliminate too many jumps that require maximum accuracy. The gadgets are pretty much the same as before, poison gas and x-ray goggles are examples of whole new ones.

Like I said, the game doesn’t disappoint until a while has passed. There are some minor difficulties here and there; even the first stage, not to mention the boss fight, shows you next to no mercy. In the second stage, all hell breaks loose as you’re first introduced to the consecutive use of the grappling hook. The very same grappling hook that has made your life a living hell in many Batman games, is back worse than ever. To you, personally, it’s useless, or so you would like to think. Unfortunately, it isn’t. You need it, it’s mandatory. After hours of trying to get it to work the way it’s supposed to work in one certain spot, which unfortunately is just an example, you have either lost interest or died due to a snapped artery in your brain, which on the other hand is due to all the cursing and stressing over Batman’s ultimate incompetence in the game. “Got it, got it, don’t got it”... and down goes Batman, falling into yet another bottomless pit due to the totally unpractical hook, as well as one damn invisible wall. The whole grappling system destroys not less than 50% of the whole gameplay experience and fun factor. Trust me, or see for yourself.

Although the grappling hook (riddle me this, how many times have I mentioned it already?) plays a large role in making the game only frustrating instead of actually difficult atop everything else, most parts of the game are really, truly challenging. Extremely difficult, in fact, yet not impossible. Parts of the game are even fairly fun to play after you’ve gotten over certain elements of it I just can’t bear to mention anymore.

The Adventures of Batman & Robin is not a bad game, but apparently even the most minor features and elements can turn against you and the game you’re playing, easily and notably. The game demands too much unconditional patience, which might be best spent elsewhere, but as I already noted, fans of the Batman franchise should at least try the game once or just watch it, since it’s incredibly authentic.

This time, three wholly different versions of the game were made. Sega’s Genesis and Game Gear versions are similar to the SNES version in terms of gameplay, but the storyline is all different and introduces a different rogues gallery, and Mr. Freeze as the main antagonist. The Sega-CD version is an interactive animation combined with brief action sequences in which the player is in control of the Batmobile. This version has been dubbed a “lost episode” of the animated series.

Batman – The Animated Series, renamed The Adventures of Batman & Robin in the second season, ran valiantly for almost exactly three years, from September 1992 (three months after the premiere of Batman Returns) to September 1995 (two months after the premiere of Batman Forever). It won two Emmy awards, and holds a high average rating of 9.2 on IMDb, as one of the most critically acclaimed animated series’ of all time.
Signed by Kuzpo klo 1.01