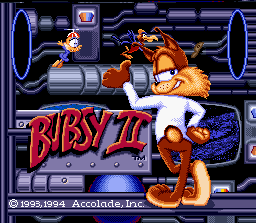 You know what’s worse than Bubsy in Claws Encounters of the Furred Kind? Anyone? Yeah, I know, this is a tricky one. Well, the correct answer is a SEQUEL to Bubsy in Claws Encounters of the Furred Kind. The first Bubsy game sold so well, that Accolade actually thought they were onto something. Or maybe they didn’t, maybe they just wanted to cash in a bit more, after all they did maximize their profits by developing the game themselves. Who knows and who cares? This game exists, and that, my friends, is a crime.

Yeah, send that fucker back in time – back into nothingness, preferrably

Bubsy loses track of two of his relatives at a fishy historical theme park run by a sinister businessman named Oinker B. Hamm. Bubsy needs to travel through time, all the way from the medieval times to World War I and back, to find his kin and put an end to Hamm’s evil plans.

If you thought the first game looked a bit confusing (among other things), get a load of this. There’s so much crap on the screen, that your fear of hitting anything in the previous game jumps on your face right away, and once again, you really don’t know for sure what you’re allowed to hit without losing health. The music and sound effects, including those dastardly voice samples, sound like they’re from a Commodore 64 game, and like they were recorded in a toilet.

I sincerely don’t know what I can tell you about the game without giving off a certain scent of some biast resentment for the whole franchise, and refusal to even try to play the game properly. I can assure you, this game is BAD! Let’s start from the beginning, from the very moment you have made the error of popping the game in and turning on the power. “Accolade – Games with PURRsonality” comes up on the screen. This is the only time the game induces honest laughter for the right reasons... of course, on Accolade’s behalf, they’re wrong reasons. There’s not a drop of personality, or hell, PURRsonality, in this game. It’s still Bubsy the Copycat, ripping pages off Sonic’s playbook, and doing it badly. There are three different game modes – the story mode, the grand tour and play-for-points. As far as gameplay is concerned, there are really no notable differences besides the natural fact that you won’t be able to beat the game in any other than the story mode. You can choose your difficulty level this time around, but the thing is that the game isn’t difficult. It’s just chockful of sudden, totally unexpected deaths, including the famous falls and leaps, and there’s no way getting around those!

Bubsy has a couple of more tricks up his sleeve. Useless ones, but I guess I can compliment Accolade this one time for at least trying. He can use toys, for example bombs, as weapons. These different gadgets can be bought by using trading cards, scattered all over the theme park, as currency. The most important tweak (on paper!) is a health meter. In the first game, the first hit of anything killed you, including the first hit of a glitch. In this game, you have three health points; your health is indicated by Bubsy’s facial expression in the top-right corner of the screen. What a great idea! ...But still, the enemies are everywhere, it’s impossible to keep avoiding them, and one crash to the ground from a random height will still kill you, instantly. So practically, all these tweaks are very little beyond artificial. The level design is completely pointless and inconsistent. What’s harder than the game itself is to get a grip on what the hell’s going on, all the time.

To make a long story short, the game’s only strength is its non-linearity – you can try beating the stages in any order you want. To sum everything else up... I’m sorry, in advance. It’s horse shit, plain and stinky, molded into a SNES game cartridge; the same shit they made the first game out of, only this one’s been in the sun for just a bit longer.

Bubsy II is an easier game than the first one, not much less frustrating though. It’s inconsistent and boring as hell, so the real challenge is to get up your ass, grab the controller and take that annoying bobcat for one last ride before giving the cartridge the Frodo Baggins treatment and burn it in the hellfires of doom. With Bubsy II, Accolade repeated Solid Software’s mistakes though claiming to make up for some of the “minor problems” of the first game – the gameplay’s horrible, and not fun even for the ten minutes the first game was. The detailed graphics do not look good, they look confusing, and the level design sucks some major cock. Oh, I should try it once more just to make sure? Never again, I say.

(Editor's note: I did try it again, to get one more screenshot. It still sucked.)