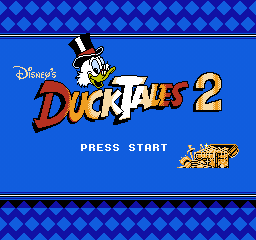 Capcom and Disney’s usually prosperous co-operation took a commercial and critical landslide after the international release of the SNES. Since the company focused on the development of games like Mickey’s Magical Quest and the continuity of their own original franchises to carry their operations over to the new generation, Capcom’s true efforts to produce NES games were quite inconsistent. In 1993, they released two sequels to critically acclaimed platformers based on Disney media. Chip ‘n’ Dale – Rescue Rangers 2 went largely unnoticed by fans and got bashed by game critics around the world. DuckTales 2 suffered a similar fate. Both of these sequels were released years after the shows they were based on had been cancelled, on the fading NES of all consoles, and apparently just didn’t offer enough new features to please the critics. The times are different. Chip ‘n’ Dale 2 indeed might’ve not been very special, but retro definitely forgives DuckTales 2.

Duck the critics and play the duckin’ game

Huey, Dewey and Louie discover a piece of a treasure map left behind by Scrooge’s father Fergus McDuck. The Duck family once again takes a trip around the world, all the way from the Niagara Falls to the Bermuda Triangle, to recover the rest of the map and maybe a few lost treasures on the way.

The graphics are simply excellent, and you know exactly what you’re in for if you’re familiar with the first game. This one has a notably better frame rate, probably due to the fact that it’s not quite as detailed – if it’s intentional or just rushed, I don’t know, but it looks good and Scrooge’s movement is far smoother regardless of how much extra is on the screen. The music ain’t quite on par with the first game’s collection of tunes, even though the game was made by the very same team.

DuckTales 2 is pretty much of the same old, even the plot starts to feel a bit used once you get under the surface. However, there are lots of changes, even quite major ones, actually. The level design is even more complex than before and this time, the hidden treasures – the map pieces – are extremely hard to find on the first round. It takes a lot of patience to carefully clash through all of these stages, since there are so many confusing choices of route. This time, in addition to the fact that you can leave a stage any time you bump into Launchpad, you can also re-enter a stage you have previously beaten. It’s pretty mandatory too, if you want to find the map pieces you’re possibly missing and go for the true ending of the game. If that’s your intention, be sure not to enter the final stage before finding everything, ‘cause then you won’t get another chance – you’ll have to start the game over. What’s quite strange is that the game’s main plot is merely a sidequest. The main goal of the game is actually the exact same thing you did in DuckTales, to collect all of the world’s lost treasures. Finding all of the map pieces, however, has quite an effect on the ending. Not only is it different, but there’s also an extra stage for you to enjoy.

Scrooge’s cane has a couple of new features, which can be reinforced with Gyro Gearloose’s inventions. He shows up in a few stages; sometimes he’s in trouble and needs your help, but usually he just hangs around your mandatory route, or sends the boys to inform you of a new gadget of his. Either way, he gives out his inventions for free. They include adaptors that have an effect on the power of Scrooge’s classic golf swing and pogo jump (which is much easier to handle and maintain than before), however not their attack power, only the crushing power. In other words, at some point in the game you have the ability to crush solid rock. Scrooge’s most important new ability is pulling stuff with the cane. He can latch the cane onto a barrel and pull it, and after getting an adaptor for the pull, he can pull two stacked barrels at once to be able to jump to even higher levels. Another one of the new features for the cane is hanging. There are many sequences in which you pretty much have to rely on luck and jump between ornaments on the wall and use Scrooge’s cane to hang from them. When enemies come along, this can get pretty damn frustrating since Scrooge makes a ridiculous jump backwards upon touching an enemy.

Every time you complete a stage, the boys open shop and you are given the opportunity to buy some more or less important power-ups; cakes, Mojo dolls, continue globes etc. and it just might be that they have one of the fabled map pieces in stock. All of the items are extremely expensive, but you shouldn’t worry too much about money, you don’t need it for anything besides the shop. It makes you wonder though: what would three school kids do with that much money...?

You have three difficulty levels to choose from, just like in the first game. However, the game is harder by default and the hidden stuff is much trickier to find. If you loved the original DuckTales to death and are a bonafide veteran of the classic platformer, you shouldn’t have too much trouble, just a damn good time – the gameplay’s pretty much the same and the new abilities are easy to learn and take in.

Don’t listen to critics who were all in shock and awe due to the SNES at the time, and some people who are such purists that they feel it’s mandatory to beat an ill-fated sequel down. DuckTales 2 is inferior to the first game, and it recycles it a lot in every possible sense, but to me, that spells out another damn good game! Seriously, nearly as good as the first one. Period.