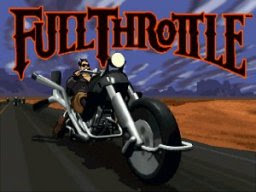 If my less than accurate memory serves me correctly, Tim Schafer’s directorial debut Full Throttle was my first touch with LucasArts’ acclaimed series of adventure games running on the legendary SCUMM engine. After years of playing all those oft-frustrating, yet classic and inexplicably addictive games by Sierra On-Line, SCUMM felt like heaven ‘cause I was very much into the genre from the start and it was so much more refined than any engines utilized by Lucas’ competitors. Back then, Full Throttle was difficult as hell to finish, but when I finally beat it, I found it a bit too short and for a LucasArts game, a bit disappointing a well. The conclusion I have come to with this game is not easily explained at all. It’s not for rookies, yet veterans of the genre might not get their time’s worth from it.

In the not-so-distant future, motorcycles have become extremely rare. Only one company in the world manufactures them – Corley Motors. Founder of the company, Malcolm Corley, is dying and his devious business partner Adrian Ripburger is burning to inherit the company all to himself and turn it into a hovercraft empire, to effectively end the motorcycle business for good. However, the bike-loving Corley has other plans, which prompts Ripburger to get rid of his superior stockholder sooner than expected – he just needs to find a scapegoat. The perfect opportunity arises when Corley and Ripburger bump into the Polecats, a gang of tough bikers led by a man simply known as Ben. Ripburger’s goons attack Ben to stall him, while Ripburger misleads the gang, offs Corley personally and leaks to the national news that Ben was the perpetrator. With the help of a tomboy bike mechanic named Maureen, Ben sets out to clear his name, save his gang and bring Adrian Ripburger down for good to avenge the death of his hero.

The game looks excellent, technically better than many hit adventures of the era. Not to take anything away from those games, but the animation of Ben’s bike is awesome and especially close-up animations of the characters’ facial expressions look very nice. The characters themselves are like straight out of a comic book. Rough pixels are a-plenty during actual gameplay, but on the other hand the framerate’s good, there’s next to no twitch at all. The voice acting’s superb – some lesser voiceover regulars cross lightsabers with Mark skywalkin’ Hamill himself, who portrays the self-absorbed villain Adrian Ripburger, plus some additional minor characters. Most of the music in the game is contributed by a San Francisco-based hard rock group named The Gone Jackals. Some maiming riffs and pounding rhythms to go with the glimmer of Ben’s übercool bike are guaranteed to make anyone who likes all forms of “heavy metal” happy.

This game was the first of two SCUMM games to feature the unified SCUMM icon which depicts Ben’s available bodily functions. This works a lot better than the endless function toggle in Sam & Max Hit the Road and some of Revolution Software’s titles, but I still kind of miss the classic Give – Open – Close – Whatnot system of the earlier SCUMM games. This one’s technically better, that’s just old school – teachings I will never forget. Too bad this icon system was canned after it was used one more time in The Curse of Monkey Island, along with the whole engine.

Learning the basic functions of Ben’s hand, foot, mouth and eyes is easy, but figuring out all of their possible uses in different situations is trickier... yet, fun as heck. Ben moves faster than most protagonists in LucasArts games, so even if you’re forced to do a little running around – which you certainly are – you shouldn’t feel too much pain because of it.

The action sequences which involve Ben picking on-road fights fights with members of rivaling gangs are quite fun at first, but dull and frustrating towards the end. Luckily there’s a simple cheat code which allows you to skip the fights, and the game doesn’t punish you for its use in any way. Cool. There’s also another type of action sequence which mixes vehicular action with a traditional adventure game puzzle, and an epic final showdown which requires quick, smooth action. Yes, you can die in this game, which is quite rare in LucasArts titles – as noted by Mort in The Curse of Monkey Island – but the game cannot conclude in an unwinnable state. This being said, don’t be afraid to use your items. This isn’t a Sierra game (“I told you to save often!”).

There are two sides to the challenge coin. The game is quite difficult as far as the practically clueless puzzles are concerned, especially for someone who’s not familiar with SCUMM or adventure games in general. Yet, the game is short, extremely short. Whereas classic old school adventures like Monkey Island 2 and The Fate of Atlantis, and even the more recent Day of the Tentacle are long and puzzling, the technologically advanced Full Throttle is practically over before it really begins. Of course it might be that Schafer and LucasArts spent so much time on the audiovisual side of the game that they simply didn’t have the resources to make it that big. It’s possible you’ll be stuck on one individual puzzle for ages, but if you can work it all out quickly, the game’ll be over in two to three hours in your case.

Full Throttle is an entertaining game which criticizes a still possible dystopia. Less dialogue, less humor and the lack of length take away from the excitement that is usually associated with LucasArts’ know-how of the genre, but overall, the game is a nice addition to any point ‘n’ click fan’s collection.

The third last game to run on the SCUMM engine.

Ben's last name is officially Throttle, but Tim Schafer and his team decided to cut out all references to the name, since Throttle is also the name of a character on the animated series Biker Mice From Mars, which was at the peak of its success in 1994-95. The original manual refers to Ben as Ben Whatsisname.

Ben is voiced by Roy Conrad, who died of lung cancer at the age of 62 in 2002. It has been speculated if smoking killed him – in reference to his rough, low voice – but reportedly he never smoked in his life.

Unlike overtly humorous LucasArts titles such as Monkey Island and Sam & Max, the more serious Full Throttle lacks the common references to the company's Star Wars and Indiana Jones franchises. However, there are a few notable references to Star Wars: when Ben receives the fake ID from the hiding reporter Miranda Rosewood, she says "Help me, Ben. You're my only hope." Counting out the exclusion of the name "Kenobi", this is exactly what Princess Leia says in the first Star Wars movie. The main antagonist Adrian Ripburger is voiced by Mark Hamill, who of course, is most known for his starring role as Luke Skywalker in the original Star Wars trilogy in addition to his other voiceover work in several games and cartoons. Hamill also does the voice of Emmet, who has an Imperial logo tattooed on his forearm, as seen in a cutscene. One of the drivers in the demolition derby was designed to look like George Lucas.

Full Throttle's voice cast was the first of its kind to feature mostly SAG (Screen Actors Guild)-registered professionals instead of in-house talent only.

According to Tim Schafer, the game's co-writer and designer, a deleted sequence would have had Ben high on peyote, undergoing a hallucinogenic trip. Back then, it was so unheard of in a game that the idea had to be scrapped and saved for later. The critically acclaimed platform game written by Schafer, Psychonauts (2005), was based on the unused piece of script.