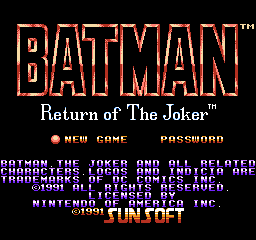 Instead of waiting another year to possibly nailing a chance at a second Batman movie license, Sunsoft developed and published Batman: Return of the Joker in 1991, as if to cut the rest of the few loose ties with the original movie license. Plotwise, the game is all over the place as it seems like an unwritten sequel to the movie, on the other hand it draws more influence from the Batman comics of the late 80’s, and on the proverbial third hand, it really has nothing to do with Batman at all. On top of all, it ain’t too fun to play either.

The Joker escapes from Arkham Asylum, which is an impressive feat after taking a nasty fall of several hundred meters straight into asphalt, CLEARLY dying... assuming any of this has anything to do with the previous game or the movie’s storyline. Anyway, he hires several, genetically superior henchmen to help him take over Gotham City. Waiting for Batman to make his move, the Joker hides, trusting his henchmen to finish off the Dark Knight of Gotham.

The game looks and sounds absolutely phenomenal for an 8-bit game, so great that it pains me from head to toe to see how the game itself turns out. The large sprites look awesome in comparison to the small bundles of pixels of the past, and the game features a wide array of impressive visual effects. The music is mainly Naoki Kodaka’s writing, and he doesn’t disappoint after his strong performances with the different versions of the previous title.

Now, if you thought controlling Batman was a bit tough before, get a load of this... well, load. There are a lot of things I’d like to point out, affecting both the playability AND a believable presentation of the whole Batman franchise.

First of all, Batman’s variety of moves is pretty narrow. Crouching, running, jumping. That’s it. So what’s missing, you ask? Maybe punches and kicks? No, it can’t be. Well, it is. Batman has no melee attack of any kind. He has a gun attached to his arm, which he uses to shoot Batarangs and other projectiles. OK... as far as gameplay is concerned, maybe I am ready to disregard this as I no longer have to drag myself directly in front of the enemy and beat him to death, now I can try a more strategic position. But, the only items you can get are these projectile weapons and an invincibility item I’ll return to in a bit. No health items whatsoever, you’ll have to deal with what you have. As far as presentation goes, giving a gun to Batman is pure franchise murder. This guy saw his parents shot to death. It has been strictly said many times, that Bruce Wayne/Batman would never, ever use a firearm of any type. Think of this as fanboy nitpicking if you want, but it’s the truth. No Batman game was ever meant to be a shooter, which brings us to what Sunsoft did to create more variety between the regular stages.

Basically, the game is an action-oriented platformer, and as long as it stays that way, it’s pretty much based on fast reflexes and luck, due to some really bad schemes in level design, as well as accurately timed jumping, one of my worst invisible enemies in the history of gaming. Batman is so hard to get moving and reacting the way you want him to, and this makes the standard game hard to bear. Most of it isn’t too difficult by any measure, but some stages, including some “special” ones, feature all kinds of crap falling out of the sky and there’s nothing you can do about it hitting you, at least not after you’ve tried several times and know exactly when and where it falls. Trial and error, don’t you just love it especially when the game mostly sucks ass to begin with? Top this off with the returning classics: the enemies whose hits you just can’t avoid, and you’ve got yourself a scramble.

There are stages with automatic side scrolling a lá Super Mario Bros. 3’s zeppelins, only a hell of a lot worse and not fun to play at all. Mario at least had fine control, but Batman gets stuck extremely easy and crushed between an obstacle and the invisible wall quite often. Last, but definitely not least on my shitlist, and I think you should take care not to drink anything while reading this assuming you haven’t played the game yourself... are these stages in which Batman uses a jetpack of some kind to soar through the sky and shoot everything in his way. There’s nothing wrong with the gameplay if you like classic arcade shoot ‘em ups like Gradius, but... HOLY WTF, BATMAN?! This game’s as real as Madonna’s ass! I tried my best to bear it and think of it as a decent Batman game, but after beating just a few stages, I was convinced that Return of the Joker’s some forgotten idea from the writer’s bottom drawer, quickly and poorly disguised as part of the Batman franchise.

You want the cherry on the top of the cake? No you don’t, but I’ll spill it out anyway. When Batman has collected enough of some kind of turbo boost icons, he goes into overdrive and turns into this golden, I-shit-you-not corny Super Batman and starts shooting like crazy, destroying everything in his way. Anything else I can ruin your day with? No, I think this is enough. If I really have to say something nice in addition to the really impressive audiovisual side of the game, I kind of like the concept of the boss fights. At least they’re different. They are basically deathmatches with very little strategy needed. Your health bar is replaced by HP; whoever deals the most damage first, wins. The amount of damage one attack deals depends on the weapon and its type.

There are some really frustrating moments, the jumps are especially hellish, but there’s nothing too difficult about the game as the continues are unlimited as in the NES version of the previous title. Most of the stages are very short in length, and so is the game in fact. As a fan of the true Batman franchise, I must say the game’s short length is a blessing in disguise. Who knows what they would’ve pulled next. Batman: Return of the Joker passes as an action-oriented platformer, I guess, but it is so dumb in every sense of the word, so bitchy to control and even watch from time to time, that I simply can’t even imagine long, entirely focused sessions with it. In my books, Konami was the one to blast this game into oblivion with their SNES take on the Batman Returns license, and Return of the Joker hasn’t been missed since.

a.k.a. Dynamite Batman (JAP), Batman: Revenge of the Joker (Genesis)

A SNES port of the game was planned, but scrapped due to the game’s poor success.
Signed by Kuzpo klo 0.21