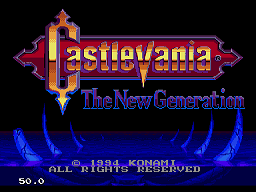 In 1994, Konami made quite an interesting move and graced Sega with their first (and last) Castlevania installment developed exclusively for the Genesis/Mega Drive system. Changing the setting to the 20th century, shamelessly borrowing storyline threads (and quite frankly, pissing on them) from Bram Stoker’s original Dracula novel and giving the Belmont family mantle to an American youngster made no difference to critics, who quite unanimously praised the game as yet another excellent Castlevania title. I wouldn’t say excellent, but good, and one of the Genesis system’s last truly impressive games.

In 1897, Quincy Morris, a descendant of the Belmont family of vampire hunters, together with lawyer Jonathan Harker, utterly destroyed Count Dracula by stabbing him and cutting off his head. In 1914, World War I began with the assassination of the prince of Austria. Elizabeth Bartley, a countess resurrected via the art of black magic, was connected to the assassination and soon it was found that she had started the war in order to possess the souls of those fallen on the battlefield and resurrect her uncle Count Dracula. Three years later, Quincy Morris’ son John and an embittered Spaniard by the name of Eric Lacarde begin their journey across a tainted Europe in an attempt to find and slay both Bartley and her uncle.

The game screams out “American-made” all over. Let’s start with the audiovisual side of the title. It’s very colourful to begin with, it’s a different touch to the franchise but I kinda like the graphical style. The visual effects are phenomenal on the system’s scale and really push it to the limit every now and then. The level design is OK, and the developers put a lot of effort into the enemy design, including the bosses. Quite nice indeed. The music isn’t quite up to par with some other releases in the franchise, some of it is even plain annoying and this is a damn ‘Vania game. “Bloody Tears” checks in as a measly bonus track as does “Vampire Killer”, in addition to some other classics. They are only available in the sound test section of the main menu. All earlier songs are rearranged by Michiru Yamane, who makes her debut as the series’ main composer.

If you’ve played Castlevania games before, The New Generation (originally called Bloodlines) isn’t really that “new”, but there are some nice tweaks. I’d like to point out some things I enjoy about this curious installment. 1. You get to choose between two characters in the beginning of the game, as well as the occasions when you lose all your lives and choose to continue. John and Eric play out pretty much the same. John carries the Vampire Killer, while Eric wields a mighty spear. John can use the Killer to swing across gaps, while Eric has a superjump ability. These abilities, unfortunately, don’t have much use in actual gameplay, but they can be used to determine the route you’re to take, a lá Castlevania III. 2. You can jump while climbing up a staircase. You still have a chance of falling straight through it if you jump onto it from a solid platform, and that can prove to be a serious drag in certain stages. 3. The upgrading of weapons doesn’t stop in the standard third step. There is a special item that ignites Eric’s spear and electrifies the Vampire Killer. These superweapons work until the characters sustain damage, kind of like in the case of the Master Sword in the Zelda games. 4. The traditional secondary weapons are much bigger. Actually, they’re ridiculously big in size, which is really a good thing because there’s a bigger chance to hit. This time, the secondary weapons are activated by jewels instead of hearts. The item crash, a devastating secondary attack used in cases of emergency from the Japanese ‘Vania game Chi no Rondo is back. 5. You can interact with environmental objects to open up paths.

There are six stages, located all over Europe, starting with Castlevania’s ruins in Transylvania. Each stage has several sublevels, varying in amount, and each has at least two bosses. The bosses are relatively easy to deal with for the most part, there’s not an ounce of the same intensity and planning as in, say, Super Castlevania IV. The “gauntlet runs” from that particular game are back, although this time they are even more frustrating and difficult due to the fact that very often you’ll probably think and act a lot quicker than the screen does. Thinking faster than the system’s very own processor leads into a lot of leaps into the unknown and sudden deaths for various reasons. For example, if you climb a staircase that leads off-screen, but to a platform that is still part of the gauntlet, you might very well be attacked by an enemy on top of it – you don’t even need to see the bloke – and as Castlevania’s “off-the-edge karma” would have it, you’ll drop down, below the bottom line of the screen, and die. Maintain focus and slow down if you want to succeed, quite the opposite of what you have to do in most games which have similar sequences in them. It’s stupid, but it has to be done in order to progress. Oh yeah, and now that we got to the mentioned karma, don’t forget to keep a lookout for the infamous flying bastards!

As far as franchise presentation goes, I personally think the plot is dumber than my left shoe. The grammar’s all messed up even though the game was made by Americans, and even though classic Castlevania themes and gameplay elements are here to represent, the game really doesn’t feel like a canonical part of the series. Only an opinion, ladies and gentlemen, only an opinion. If you eat, drink and shit the Castlevania franchise, and are Sega lovers to the core, I don’t see any reason why you wouldn’t enjoy the game.

The game is not too hard after you’ve figured out a solid, strong way to hack through the most fucked up stages and sequences, which usually involve a gauntlet in this game’s case. Castlevania: The New Generation is a moderately solid, yet very faulty Castlevania title. The standards in originality and visual design set by Super Castlevania IV are met on the system’s own scale, but the same level of joy and intensity is missing, the plot is whacked and the in-game music sucks dick in comparison to the series’ legendary soundtrack.

Castlevania games have often been heavily censored, but this game’s European version is definitely the most stripped game in the whole series due to the original version’s high level of violence. The game’s name was changed in Europe to discard the word “blood” from the title, and every smallest hint of blood and the most graphical violence was removed from the game itself.

Main character John’s father Quincy Morris was a character in Bram Stoker’s 1897 novel Dracula. In the game it is told that Quincy killed Dracula in 1897, while in the novel it was Jonathan Harker who decapitated Dracula. Also, there is no mention of Quincy having any children in the novel.

According to the game’s storyline, World War I began with the assassination of the prince of Austria. This is partly true, although in reality the murdered aristocrat was the archduke of Austria, not the prince.

“Bartley” is a mistranslation of “Bathory”. The character is based on Elizabeth Bathory, the infamous 16th century Hungarian countess who killed hundreds of young women and bathed in their blood in an effort to gain eternal youth.
Signed by Kuzpo klo 5.21