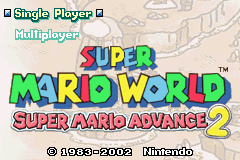 I'm not really sure about the true story behind the awkward order of the Super Mario Advance series, if there is any - maybe it's just instinct. However the story goes, in 2002 Nintendo brought back one of the most important Mario platformers of all time - Super Mario World. In 1990, this extremely essential must-play game served as the launch title of the behemoth known as the Super Nintendo Entertainment System. In 2002, it was given the name Super Mario Advance 2 and carried over to the Game Boy Advance. Unlike its predecessor, Super Mario Advance 2 features very slight changes made to the original game... and I like it.

Return of the dinosaur

Princess Peach goes missing while she's vacationing in a faraway place called Dinosaur Land with Mario and Luigi. The brothers begin to follow a trail deep into the heart of the land, where Bowser has once again set keep. The brothers are accompanied by a brave young dinosaur named Yoshi, whose friends and relatives have also been captured by Bowser and his Koopalings.

Virtually nothing has changed about the graphics in the last 12 years, and I can come up with a quite reasonable explanation for that: the original game just looks so damn good there's no need for a graphical overhaul. If anything, the graphics have actually been downgraded a bit. Luigi's character design has been changed and the HUD looks slightly different, but that's about it. The music is just slightly remixed for technical reasons. The voiceover samples are here once again with the potential to annoy, but in this game they're not really a nuisance since the characters don't yell out retarded catchphrases every single second, and apparently only Mario and Luigi speak in the game.

So, there's a "cutscene" added in to explain the game's backstory a little better than the original game ever did. From that point on, it's deja-vu all the way. The first thing you'll probably notice is that there is no multiplayer in the main game. You'll be able to switch between Mario and Luigi at any time during the game. I've said this for years, but now it really rings true: there is no point in playing as Luigi. The character's special ability of jumping really high with incredible hangtime in Super Mario Bros. 2 is carried over in addition to his lean, tall look, and the ability really serves no good purpose in this game, not on my account.

Since the control scheme of the Game Boy Advance is two buttons short of that of the SNES, some mandatory changes are made to keep all the original abilities intact. The R button triggers the spin jump, while everything else from running, riding Yoshi and eating enemies, to normal jumping is handled with the A and B buttons. It takes a while to get used to the controls, especially since it's surprisingly hard to make a running jump by using the combination of A+B in comparison to the more familiar Y+B. This is probably just my own thing, but really, it has turned out quite hard, as ridiculous as it sounds. Like in the original game, stabilized flying takes the most practice, but it really isn't as hard as it would seem once you get the hang of it.

One more slight change to the game is the fact that once you find a blue Yoshi, the classic green one won't return. I'm not quite sure what's the point, if there once again is any. The castles, haunted houses and fortresses now also have five Yoshi Coins - or as they're formally known, Dragon Coins - hidden within them. Yoshi still can't enter these buildings, and there would still be no use of him in them, anyway. I think that's all I have to say about the version differences!

Like its predecessor, Super Mario Advance 2 includes Mario Bros. Classic, the exact same version of it, as a bonus. Nintendo's making doubly sure that each Mario game buff in the world gets a dose of the arcade classic, and it's cool - and harmless.

Once you get into the simplified control scheme, you'll find Super Mario Advance 2 to be just as challenging as the original Super Mario World - no more, no less. Soda Lake is still one of the meanest "normal" stages ever, it's still incredibly hard to find this secret location, and the constellation beyond Star Road, to which many 100-percenters have come to die, is just as evil as ever.

Super Mario Advance 2 is a good, entertaining re-release (NOT a remake) of one of the greatest platformers of all time, and just the thought of spending a long, boring bus trip playing a 16-bit classic like this on your handheld console until your battery explodes is an extremely warm one.