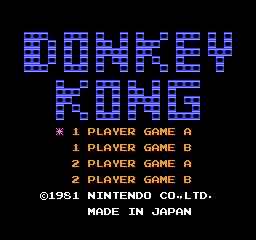 In 1981, 28-year old game designer Shigeru Miyamoto created an arcade title that would change the video game business forever. Not only was Donkey Kong the most complex game seen at that point in time, it also gave birth to not one, but two immortal video game icons. The question here is not how Donkey Kong fares against today’s video gaming standards, that would be unfair, as if that would even require some sort of an explanation. The question is how good the game is.

The pet gorilla of Jumpman the carpenter kidnaps his owner’s girlfriend, The Lady, and climbs a construction site. Jumpman takes on the role of a hero to regain control over his rampant pet and save his girlfriend.

Seriously, what do you expect from Donkey Kong audiovisually? The game is ugly as hell, much worse than the arcade version, but it’s kind of cool that you can already see the unique features of the characters which became prominent a few years later, especially when Mario got his own game. There are few tunes here. One is the Donkey Kong theme immortalized by Donkey Kong Country, one is a “dark fanfare” that plays every time you start a game and one plays after you’ve saved the Lady (a.k.a. Pauline) in each stage. The stages, praise the Lord or anyone you wish, have no background music. The sound effects alone are hazardous to your health. Listening to Jumpman (a.k.a. Mario) walk is pure murder.

The game is dated. Before you damn purists, God knows I hate you guys, get all over me, let me finish. The basic idea is to climb ladders, watch out for obstacles such as barrels and flames (from what I can gather, the building’s on fire) and climb to Pauline. Fighting Donkey Kong isn’t possible and touching him spells death. There are three stages in this version of the game. Each one has its own strategy, which is not too hard to figure out. Everything you need is on that one single screen. Every time you defeat Donkey Kong – again, not by fighting him but indirectly incapacitating him – you are reunited with Pauline and given the chance to beat the game at a higher difficulty. It’s all about high score here, in the vintage arcade style. You can beat the game itself in five minutes, but if you’re frankly an utter freak, you can go on and on for hours and check out which level is difficult enough for you.

First of all, in terms of gameplay, I can’t stand the fact that you might die by jumping down to a lower level. I can’t stand it. God damn it, even if the character of Mario and his ability to jump were redefined years later, how in the hell can he die from that? The same goes for the jumping itself, his jumps are weak and helpless – you’ll need perfect timing with the barrels in the first stage. He’s called Jumpman in this game, for crying out loud, and he can’t jump for shit! I know that to you, I’m bitching for nothing and Donkey Kong is the best game in the universe, blah, blah, blah... but seriously, I’m just pointing stuff out because I’m quite fucking tired of a game like this on each “Best of Ever” list there is just because it’s Donkey Kong and admittedly happens to be the most revolutionary game of all time. No one can honestly say they’re getting the same kicks out of Donkey Kong today as they did three decades ago.

The initial run of the game is pure breeze, but for hardcore gamers, it’s more like copping a feel than the real thing. The difficulty level increases after each win and gets extra hard extra quickly. I hope none of you really thought I was going to take a turn here and give Donkey Kong a perfect 10 like some puppet, or a really crappy rating. No, I think the middle road is the safest to take here. If you think back on how much this game changed the video game industry into the one we know, you really have to be some sort of idiot to not try the game at least once and shed some nostalgic tears, but the times are different for classic arcade. It just doesn’t feel the same anymore. Perhaps it never did on a home console.

Nintendo Power ranks Donkey Kong #148 on their list of the Top 200 Nintendo Games of All Time.

The game’s presentation was largely influenced by Beauty and the Beast, Popeye and King Kong. Universal Studios even sued the designers for the most obvious, unauthorized references to King Kong, but lost the case.

Shigeru Miyamoto came up with the name Donkey when his King Kong game project fell through. He searched an English dictionary for a synonym of “stupid” to go with “Kong” – which is the depiction of an ape.

Nintendo’s believe it or not: the classic look of Jumpman, who was renamed Mario in 1983, was born from technical limitations. It was impossible to animate hair, so he was given the classic red cap. A mouth was way too difficult to draw on such a small sprite, so he was given his famous moustache. The blue-red overalls were done so that his arm movement would be visible.