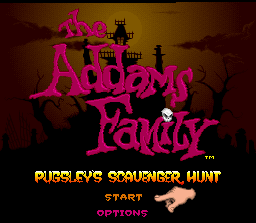 On the heels of the moderate success of their previous game based on The Addams Family, Ocean Software whipped up a few more. The first successor to their 1992 platformer was Pugsley’s Scavenger Hunt, which is based on the fairly popular animated series of the 90’s. While they did fix some minor problems plaguing the previous game, Ocean pulled the classic stunt of leaving all the major ones in, and coming up with whole new quirks for good measure – in this case, that measure being the art of pure torment.

For the record, I never liked Pugsley anyway

Wednesday Addams challenges her brother Pugsley to a macabre scavenger hunt, in which his goal is to find items special to each member of his family, hidden somewhere in their trap-laden bedrooms. Wednesday and the family do their very best to provide Pugsley with some good family entertainment in the Addams way.

Most of the game looks really nice. The animation is well crafted and I like the way they used imaging from the original cartoon, but I’m amazed that in contrast, some details and common textures, such as blocks, floors etc. look like they’re out of an 1985 NES game. So, all of it doesn’t quite mesh. The soundtrack is piled up from updated and rearranged tracks from the previous game; nothing special and over time, extremely annoying.

Everything’s going relatively well thus far... but GAK! What the hell? I am so getting into the cool level design, improved controls and general gameplay, when suddenly I hit everything that moves, and even everything that doesn’t move. My lives are systematically running down the drain even though I chose to start off with seven lives and three hearts. What the fuck?! Well, it’s no surprise... you see, the game is hectic as hell. The admittedly improved controls simply don’t help. You simply can’t avoid death in these environments that are practically plastered with enemies and obstacles all over. There’s no safe place. You can’t take one safe step. On top of all, in my experience you don’t even have to be hit to die, apparently!

Occasionally, you have to fiddle with objects otherwise threatening your progress, to make progress. For example, in Lurch’s stage there are corrupt walls which have to be demolished by standing on a moving cannon ball and steer it towards the wall. As the physics that suddenly return from the previous game to haunt you would have it, you’ll most likely jumble when you try to jump off the ball, and smash head first into the wall yourself, taking damage. Nice. Very user-friendly stuff. The jumping is PURE HELL. Pugsley’s new abilities such as walking while crouching, and running without the need of some specific shoes, don’t help you one bit when it comes to the basic stupidity of the interface.

Fester’s stage introduces the player to hordes of some green slimeball enemies, right off the bat. Jump on one if you wish, that’s the natural thing to do after all, and it does work, but make one false move and you’ll be hit by its several larva. Game over, again. Beginning to catch my drift here...? The game is unforgiving. And unforgiven.

I’ll go with what I said about Ocean’s first game. Call it difficult if you want, to me it’s just frustrating. It tears my nerves to tiny little pieces – I clearly see what I’m going for and aiming at, and I know exactly what I’m supposed to do, but then I see my character yanking his torso in place when he’s supposed to make a timed jump according to my command. Then he falls down, gets bumped by a freakin’ mouse and dies. “Try again, asshole”... no I won’t, especially when there are this few checkpoints. I’ve spent enough time with this game as it is, trying very hard to like it and maybe even enjoy it, but no, I don’t even realize the possibility. It’s much worse than the previous game by all accounts. It doesn’t even have a password system. There’s nothing to save your non-progress!

The Addams Family: Pugsley’s Scavenger Hunt is a hectic, frustrating, utterly senseless platformer with semi-nice graphics and some minor, competent ideas, most of which go to total waste. I think Lurch sums the game up the best in that one screenshot there. I’d take the first game over this one any day.

The NES version notably differs from the SNES and Game Boy versions. It is basically a port of SNES’ first Addams Family title, with Pugsley as the lead character instead of Gomez.
Signed by Kuzpo klo 11.56