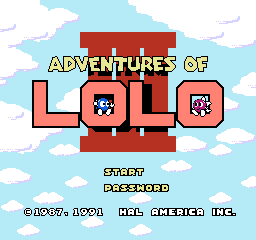 Having endured some criticism from consumers regarding Adventures of Lolo 2, HAL focused on adding depth to the original concept when working on Adventures of Lolo 3. The game sold quite poorly, mainly due to the launch of the SNES, but won over most critics and fans of the earlier games with fairly updated gameplay.

Ever since King Egger, the Great Devil, was defeated by the blue bundle of wit, Lolo, Eden has been a peaceful kingdom ruled by Lolo and Lala. During their picnic away from the confines of the kingdom, Egger’s son, the new evil tyrant of Eggerland, attacks Eden and turns its population into stone. Lolo and Lala set out on a journey together to fight and dethrone the new King.

There’s virtually nothing new when it comes to the graphics. All of the extra stuff between stages looks pretty damn horrid, though – like a Game Boy title with an 8-bit palette. Once again, they switched to another merry jingle, but once again, the background music doesn’t change at all during gameplay.

There are a lot more changes to gameplay, however, than one would expect after witnessing the non-existent changes in part two. First of all, the game’s non-linear and you can choose between Lolo and Lala, whichever character suits your sex, or taste in colour and style. Personally, I’d never play as a pink character if I had some other choice, but that’s my quirk. There’s a world map you can and must navigate. On the map, there are hollow trees, inside which grandpa – “brown ball w/ moustache and a cane” – teaches some basic techniques learned in the earlier games, for those who never played them. It’s good, since the game pretty much goes straight to business once you start. When you’ve had enough of all the mumbojumbo, you can choose between multiple stages. If you’re playing an Eggerland game for the first time, you should naturally start with the relatively easy stages. Once you have cleared all stages on one continent, the tower there is unlocked and acts as a boss stage, as well as your passage to the next continent.

This time you don’t have lives, which is OK since they always were there for absolutely nothing. You can keep on trying to solve a tricky puzzle for as many times as you like. Unfortunately, some of the puzzles are so long and complex that starting them over due to one tiny false move is extremely irritating. You can’t kill yourself, either. The effect of the Select button is still practically the same, but since you don’t have any lives, you don’t die; you simply start the stage over.

So, this time there are several bosses and not just the big cheese. The difficulty of the boss fights varies; just like before, the puzzles are the real challenge in the game. However, like in Adventures of Lolo 2, a fair deal of it is also based on active, mobile enemies. The ones that chase you to cast a fatal attack can be a real pain in the ass and they definitely take away some of the enjoyment of a basic puzzle game, especially when there are more than three of them in one room – double that when there’s a Medusa lurking somewhere. Just one of those bitches is enough to make your life and gaming experience miserable.

The game has a 100 different puzzles, and the challenge isn’t limited to them. That’s as much puzzles as in the two previous games combined, and the game turns from easy to difficult quicker than you can spell these two simple words: “holy shit”. Definitely one of the toughest games I’ve ever touched.

Adventures of Lolo 3 is a good addition to the series and certainly a challenging game regardless of whether or not you’ve beaten the two previous installments. Not an audiovisual treat, that’s for damn certain, but that shouldn’t be a big problem to anyone who appreciates the genre. A quite recommendable game.

The game is known in Japan as Adventures of Lolo 2 because the “first” game was never officially released in the country.
Signed by Kuzpo klo 11.29