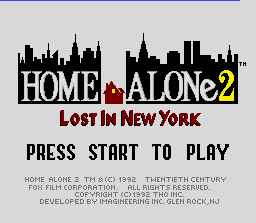 Home Alone 2: Lost in New York was a really, really good sequel, one of the most essential movie sequels to come out back in the day. Home Alone 2: Lost in New York, the video game, however, was a really, really bad sequel to a really, really bad game, and pretty much one of the worst SNES games yours truly has ever laid hands on. An optimist might think THQ learned something from the previous game. A realist goes along with it and says yes they did, since they didn’t repeat any of their old mistakes. They replaced them with whole new ones!

Lost in New York? Fuck that, I’ve been to HELL!

After a misunderstanding at the Chicago National Airport, Kevin McCallister, once again having argued with his parents, ends up in New York City all by himself while the rest of the family’s in Miami. Kevin goes through his dad’s luggage and finds his credit card, which he then uses to live it up in the Big Apple, staying in the fanciest hotel in all of New York. When the hotel staff finds out about the “stolen” credit card in Kevin’s possession, they do everything in their power to catch him instead of alerting his parents. Kevin makes a run for it and roams the streets of New York in search of shelter – but the city doesn’t scare him as much as the fact that Harry and Marv have escaped from prison, and just happen to be in New York as well. It’s a small world.

Ugh... I just had to have a smoke before I started to write this. The game’s very grainy, all around. The basically decent-looking sprites are stiff and mechanical as heck – the game looks like an NES title with a slightly wider palette. The “cutscenes” are absolutely, stupendously horrendous. The music actually sounds quite good at first, but once you realize you’ll be hearing that same track on loop over and over again through the course of the whole game, you’ll be feeling a little different about it. M.Y.M. – Mute Your Monitor. Just some friendly advice. However, I don’t believe you’ll be playing for more than 15 minutes, and just that one decisive time. Why? Oh, I’ll tell you why.

The moment you load this piece of holy hell in, a very common but in this case, very enigmatic text prompt pops up: “Press Start to Play”. Trust me, you’ll want to reflect on that for a moment. Should you really do it? I can tell you right now, if you hated the first game, after playing this one you will love and cherish it for the rest of your life. But, seeing that you already made up your mind about playing the game when you pushed the cartridge in, even just for the ironic fun of it, go on then, press Start... and get ready to rip your eyes out when you see the pixelated blobs remotely resembling Tim Curry, Joe Pesci and Daniel Stern, and something which is probably a phone booth since it says “PHONE” on it. Man, this game looks horrible right from the start! Not only that, the “cutscene” dialogue is dumb and absolutely not funny, even though they tried to add in some humour. It should be pointed out that Harry and Marv are yet again in charge of some gang, in New York, and they even have inside men in the Plaza Hotel. When exactly did the pathetic Wet Bandits from Chicago become the respected and obeyed leaders of a nation-wide organized crime unit? If a fanboy’s rant isn’t enough to convince you of this game’s level of putrefaction, get a load of dangerous suitcases, flying garbage can lids, jumping floor mops, crazed maids with unlimited ammo of linen, a hotel cook that apparently has a knack for chopping up kids for his dishes, a supposedly nice old gift shop clerk gone mad, a concierge trying to strangle you to death instead of turning you in or notifying your parents, and all that’s wrong with the gameplay, and you’ve got yourself one mess of a morally corrupt “action” game.

The game’s pretty much the same as the previous one, except this time you won’t be running in circles within one house or collecting any important items – the main theme of the game is escaping. You can explore many places such as the different floors of the hotel to get power-ups and more ammo or weapons, or you can jump straight to business by taking the short route. I recommend you take your time and look for those power-ups if you’re really that interested in playing the game, since you will most certainly need them. There are far more obstacles and enemies than in the previous game, and getting rid of them can be hard. You see, ammo is very scarce and you have to test each weapon on each enemy to see if it works on them or not. Of course, ammo for the stun gun is most common – once again, though, not very. This only stuns enemies (duh) for a short while instead of really disposing of them. The BB gun, or something like it, is once again the best weapon in the game, but once again, enemies respawn like crazy, even randomly. You can’t jump over most enemies due to their sheer size, and the new ability to slide doesn’t help a whole lot either, since you can simply run under any jumping enemies without getting hurt. Doesn’t sound too bad, huh? Well, like I said, ammo is very scarce, and if you don’t have any, you’ll actually have to run into walking enemies on purpose to get past them! Retarded? Quite! There is at least one way to dispose of each enemy, but without ammo for anything, you’re basically helpless. Oh, and if you happen to get caught by the concierge (played brilliantly by Tim Curry in the movie, on a positive note), you’re done for, that’s it. There’s no way to defeat him, and sometimes, he’s standing right behind a door. Enter, and gack! He’s got you. Enter again and see if luck serves you better that time. There are quite a few enemies that kill Kevin by just touching him, regardless of his health. Fair... isn’t it?

The power-ups include pizza for health and coins for high scores – which don’t matter in any given way – and a bunch of items which make you invincible for a short while. A bottle containing unknown liquid makes Kevin run like crazy all over the place, destroying everything he touches. The credit card’s kind of clever, since it makes you totally invisible – therefore, untouchable, in the true American way. A turtle dove – see the movie and you’ll know its meaning – is the most amusing item in the bunch. It gives Kevin the ability to spin jump in a Super Mario Bros. 3 fashion – there are even stars surrounding him... whacked! – and defeat everyone and everything in his way by jumping towards them, until he gets a straight hit from something or gets strangled by the more powerful enemies. This is like Home Alone Uncensored: Kevin’s LSD Experiment in New York.

The boss fights are “interesting”, yet not in a good way. I came up with the perfect example: the same guy that harrasses you all over Plaza Hotel, the guy in the trenchcoat and hat – probably Harry’s butt buddy. He appears as a boss once you reach the second half of the stage, after a ridiculously long, static elevator ride to the basement. He takes an unlimited amount of shots and if your ammo’s gone by the time you reach the basement, you only have access to three BB bullets. What to do? The guy kills you instantly when he catches you. Well, you have to shoot him twice consecutively, and quickly, before he can recover from the first one – which happens very quickly, I might add, with much faster pace than you can reload at. Three bullets max, and you have to nail him with two of them. Do or die, that’s the name of the game. You can’t do anything to the guy without ammo... except die, get that stupid ammunition and try again. Once you clear him out of the way, something much worse happens. You’re thrown straight into hell’s kitchen (literally) with yet another boss fight (just hope you have ammo!) and obstacles that will have you screaming murder. Die in the next boss fight, and you’ll have to do the whole kitchen sequence over and over again until you get it right. Once you get outside the hotel, you probably have less than a half of your starting lives to consume. This game is not fun.

Still doesn’t sound too bad? Well, imagine this dreadful scenario: you’ve hacked through the whole game and you’re in the final stage, or sequence if you prefer. That’s a feat in itself, by the way – since the first stage is pure, frustrating murder due to the constant lack of ammo and the ridiculously hectic inferno taking place on the screen in the second half of the stage, after the first boss fight, or the second if you count the suitcases sliding out of the elevator in the first floor. You have one life left, you’re pushing for that very final curtain call, and “AAAAAAHHHHH” – K-Mac trademark, not heard here though – you died of something very random jumping along the street. Just continue and get back on track, right? Let’s beat this motherfucker to the hilt! ...What the fuck? Game over? The screen says... “PLAZA HOTEL”? That’s right, no continues, and moreover, it seems the game thinks you’ll just start over with no complaints by automatically restarting from the first stage. The lives you’re given in the beginning and the very few extra ones you gain are the only ones you have in this God forsaken bundle of sudden deaths and impossible-to-avoid situations disguised as a SNES cartridge. Well, that’s OK, I was planning on quitting anyway since this game is so God damn dumb waste of time. The only action that takes place is legal action against Imagineering and THQ.

The game is NOTHING but frustrating and incredibly retarded. There are situations in which at least I actually say out loud: “if this were [insert better game’s title here] I’d so kick that guy’s ass”. In this one, you just can’t, not without ammo or some power-up that never really shows up when it’s actually needed. For the record: no, I haven’t beaten the game, and I don’t intend to. As a matter of fact, I don’t think I’ll ever play the game again, I have so much better and less painful stuff to do. Giving myself cigarette burns, for example.

The reason why this review might be a little “inconsistent”, is that I hate the game so much that I tend to yap about certain issues and just briefly mention lesser, but just as revolting ones. Just believe me when I say you don’t want to try this game. Home Alone was bad, but hacking through that game is nothing compared to the mental and intellectual pain this game will inflict on you. I think I’ll even dig up the first two Bubsy games for better entertainment. Or, just play something a lot better. That might work. Just maybe I can forget ever laying eyes on this game. I doubt it, though. I just hope I can still watch the movie in good holiday spirit. I believe I can, it’s so good. Seeing the famous scene involving Kevin, Harry, Marv and a ton of bricks always saves my day.