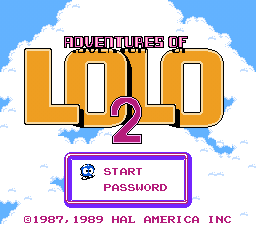 Adventures of Lolo brought the Eggerland series worldwide renown, so HAL quickly produced a sequel to the popular action-oriented puzzle title in 1990. The result – another good puzzle game, but merely something which would today be referred to as an expansion pack rather than a new game. There’s simply nothing new under this sun.

Shortly after Lolo and Lala’s return from King Egger’s stronghold, the tyrannic King himself challenges Lolo to another puzzle quest. If he can survive Egger’ great tower and its mazes, he will set the land of Eden free from his grasp forever. As further insurance to Lolo’s already obvious answer to the challenge, Egger kidnaps Lala again and takes her beyond the tower, to his castle in the clouds. Lolo doesn’t have much choice, does he?

Wait a minute... no, you have no need to wait even a minute. The game screams out deja vu right off the bat. The graphics haven’t changed at all. The game looks exactly the same as its predecessor, just some monster animations have slightly been changed. As far as the music is concerned, the good news is that they changed the tune. The bad news is, that it still doesn’t change once during gameplay, except for the end, and it’s very similar to the one in the first game.

I’m sorry, but I simply can’t say anything new about the game. You should refer to the review of the first Adventures of Lolo game if you want to know how the gameplay’s like. The game plays out exactly the same! There are no notable changes whatsoever, except for one quite generic boss battle in the very end of the game.

The game is even harder than the first one. It even starts to linger between the thin line between difficult and downright frustrating after an inexcusably short while, due to HAL’s apparent decision to make the enemies more “alive” and active than in the previous game – but for the most part, your success depends on your patient brainstorming instead of quick action, just like it should. If the game’s difficulty itself isn’t enough for you, be on the lookout for the four hidden rooms, dubbed “Pro”, and have a nice day.

Adventures of Lolo 2, wow. A good game with puzzles that’ll snap anyone’s arteries, sure, but where’s all the new stuff? I guess they never even got to planning anything new, after all it was somewhat of a time when game companies had a slight tendency to intentionally repeat the winning formula of a surprise hit of theirs. Some sequels were indeed carbon copies, but Adventures of Lolo 2 takes the cake. Luckily for HAL, new puzzles are everything most Eggerland fans needed to be entertained. Paying a full price for those puzzles, however, is something I cannot understand.

a.k.a. Adventures of Lolo (JAP)

The game is known in Japan as Adventures of Lolo because the previous game was never officially released in the country.

Like the first Adventures of Lolo game, this one’s also a compilation of rooms from the earlier Eggerland titles exclusive to Japan.
Signed by Kuzpo klo 11.24