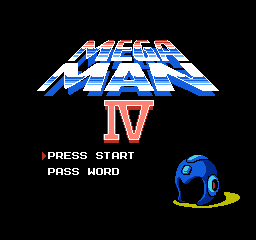 With the pending arrival of the behemoth known as the Super Nintendo Entertainment System, Capcom were stuck in between of continuing the classic Mega Man series on the NES or totally renewing it with a spin-off title on the SNES. The development of their grand opening on the 16-bit box was eventually postponed; they opted to go on with the fourth installment in the original series of Mega Man games, and headed fast into the sea of repetition.

Some time after Dr. Wily’s supposed demise, a Russian copycat known as Dr. Cossack challenges Dr. Light to see which one of them is the superior scientist and battle robot designer in the world. Mega Man sets out to take care of Cossack’s eight metal abominations and kick some Russian ass.

The game looks pretty much the same as Mega Man 3, with a small array of new effects such as rain. The scroll’s notably faster; some problems with the framerate still occur, but not to a harmful extent. The enemy design is as inventive as ever, but the bosses themselves don’t look too good in design. Composers Bun Bun, who did an excellent job with the previous game, and Minae Fujii were not quite on the mark with this one. There are only a couple of vintage tunes – the rest is surprisingly unmemorable.

The gameplay’s nearly identical to that of Mega Man 3. The game’s a lot shorter, though, since the endless boss battles from the end are harvested. All of Mega Man’s abilities from the previous game are still accounted for. Rush also has the same features. Perhaps the most important new addition to Mega Man’s arsenal is the Mega Buster, a powerful default weapon used by charging up Mega Man’s standard arm cannon. There are a couple of tools you can find in hidden locations to compensate for the lack of new Rush power-ups, but they don’t make much practical difference. A new character named Eddie, who looks like a portable toilet, appears randomly throughout the game to serve the Blue Bomber some random items.

For the most part, there ain’t much new stuff to learn here. The learning curve of the game is about a minute into it, if you’ve played any other game in the series. One tweak which I do consider very practical, personally, is the new weapon menu. You still have to toggle inside out and all over the place, but all of the weapons and items are listed on one single, neatly organized page instead of two separate ones, which makes it a bit easier and less tedious to charge up on health using the energy tank, or simply change the weapon. It’s easier to read, too, as there are icons and proper names for each weapon instead of enigmatic abbreviations.

The design of the bosses as far as both graphical design and general presentation are concerned, is quite lackluster. Even some of the cooler ones bring to mind a combination of old ideas. The worst ones are just plain ridiculous, such as Toad Man and Dust Man. The original rock-scissors-paper idea is somewhat lost here, since one weapon can do much damage to various bosses, while some of the weapons are just plain useless, such as the Skull Barrier. This is more of a simple run-and-gun game than any other title in the series. There’s not much strategy needed once you get a good start in completing the stages one by one. That might take some time in itself, but you can easily reset the game if you’re having trouble with your first boss, and repeat until you find a good place to start.

After you’ve made your way through the main stages, the final ones and the mandatory boss survival to get to the final showdown, and then beat that one, you can’t help but feel empty and maybe ripped off after seeing so much trouble to beat the previous game. That’s it? That’s all the new experience the game has to offer to the series? I simply can’t actually bash the gameplay, since Capcom improved some features, and even though the boss fights lack ideas, this is still a Mega Man game and by all means a quite good one. But, after two excellent games, a simple artificial replica just doesn’t cut it. Some new standards would be nice, and beneficial to the series.

Mega Man 4 is not an overtly easy game, but in comparison to the earlier installments it’s a breeze. I remember beating it in two or three days back when it was brand new. It’s notably more forgiving and of course, shorter in length than the gigantic Mega Man 3. These being either good or bad things is pretty much up to the player’s personal opinion. Mega Man 4 sure is a good game, but pales in comparison to its predecessors due to its lack of new features and the lame design. Die-hard followers of the franchise will surely not be totally disappointed, and it’s granted that the eased up difficulty might attract some players who twisted their spines with the previous game.

A remade version of the game is part of Rockman Complete Works, which was released on the Sony PlayStation in 1999.

Eddie is known in Japan as Flip Top. Since Eddie is a walking head, some have speculated that his English localization derives from Eddie the Head, the mascot of British heavy metal band Iron Maiden.
Signed by Kuzpo klo 3.31