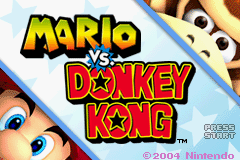 In 1981, Shigeru Miyamoto created an arcade game by the name of Donkey Kong. This immensely popular coin-operated game spawned two iconic characters who would go their separate ways after Donkey Kong Jr. - Donkey Kong became the face of his own Donkey Kong Country subseries, and Mario... well, Mario continued to rule the video game business for the next 20 years. At the E3 convention in 2002, Nintendo presented Donkey Kong Plus, a remake of Donkey Kong which was based on user-generated content. The concept of the game was scrapped soon after in perfect silence, but the mere idea of pitting the original arch rivals against each other decades after their debut was too grand for Nintendo to just let slip from their minds. In 2004, the idea became reality in a unique puzzle game named Mario vs. Donkey Kong.

Donkey Kong is mesmerized by a TV commercial about the Mini Mario line of toys, and rushes to get a Mini Mario of his own, only to find they're sold out. He breaks into the toy factory and steals all the Minis, and Mario takes it upon himself to capture the crazed, thieving gorilla.

First of all, the game's title is kind of ironic. The writers of the wacky storyline criticize commerciality, and the way I see it, giving a game a title like Mario vs. Donkey Kong is quite the sales pitch in itself. Seriously, imagine Don LaFontaine saying that title in his booming trademark voice. Wouldn't you soil yourself? 23 years after Nintendo burst into the video game scene with a huge bang, with a game starring Mario and Donkey Kong, they returned to their roots. Anyone who ever knew anything about retro gaming must've been somewhat intrigued. The setting's the same, the game's completely different - however, Mario vs. Donkey Kong does pay notable homage to the original Donkey Kong legacy.

The graphics are great. There's very slight animation in the cutscenes and they look kind of stiff, more like comic book cutouts, but the clever use of sound makes them work. We witness the return of ACM technology, however it only applies to the sprites, the stationary elements of the environment are completely flat. It doesn't always mix that great, but most of the time I have no complaints about the graphical side of the game. While Donkey Kong's brief grunts are recycled from some earlier game - I'm not sure which since I've missed out on every DK game since Donkey Kong Country 3, so far - Charles Martinet recorded new voiceovers for this game, and it's absolutely hilarious work. During gameplay, especially the most frustrating moments, he starts to sound just as annoying as in Super Mario Advance, but for example, the opening cutscene totally cracked me up for many reasons, including Martinet's final "Mamma Mia" rant, and the "No you don't!" bit. The music's very good, composer Lawrence Schwedler does his best Wise/Beanland imitation, and it works. Some classic Donkey Kong tunes have been thrown in as well - slightly remixed, of course.

The game in a nutshell: you'd like to think that because the game is called Mario vs. Donkey Kong, that you could choose your character and play two different games, but that's not true. There are sort of two different games, but the only character you can control is Mario, and your mission is to conquer six different areas, with six stages each. Every stage has two different phases, and at the end of each area, you'll have to do one more stage - called a Mini Mario stage - and a boss fight. Then there's one additional boss fight. Let's see, if my math serves me correctly, that adds up to a total of 85 "screens". Funny, the game doesn't seem that long. Well, it's actually even longer, since after your first playthrough - if you've collected enough presents, that is, you'll unlock +, which is this game's "hard mode". Now don't go thinking it's the same game with slightly harder puzzles - it's a completely different and extremely tough one, and it has its own ending. The actual game might start feeling like target practice less than five minutes into this inferno.

Well, I still didn't get to the gameplay. The game is a mixture of a regular Mario platformer, the original Donkey Kong and an action-oriented puzzle, like Adventures of Lolo. That was actually a quite good point I made there, since like in Eggerland games, your mission in every standard stage is to solve puzzles to be able to progress and find a key, and with it, make it to the next phase, in which the key and door are replaced by a Mini Mario toy. Solving the puzzles in theory isn't too hard in itself, that's why there are literally tons of enemies and obstacles, presents which unlock a bonus challenge in the end of each stage as well as parts of the + game, and an occasionally very unforgiving time limit to provide some extra motivation. The hammer from the original Donkey Kong returns, accompanied by the classic "hammer time" tune, and it works on most enemies as long as its available. Each stage begins with a tutorial on how to deal with an obstacle or stipulation introduced in the following stage for the first time, and there are also many Help? blocks in the beginning to teach you some advanced techniques. This ensures comfortable play... for a while, at least. I won't even begin to go over all the different dangers or stepping stones on your path, there are way too many of them, but I have to mention a few... on a negative note.

I'll just say that until World 3, Fire Mountain, I was fine with the games obvious, but harmless quirks. As the game gets harder in every way, these harmless quirks become quite serious ones. The physics engine in this game is amazing. Most of the time, it's extremely comfortable to control Mario, his moves are very realistic and precise. However, the engine fails from time to time, especially when it comes to jumping, or switching from one climbing rope to another - even more serious problems occur when you meet enemies that you can use to your advantage by using their tails as ropes. Sometimes, Mario seems to grab the tail, but once you let go of the other rope, you come crashing down, usually on spikes - or floors way below. Mario doesn't die every time he hits the floor, regardless of the height of his fall - but sometimes he does. I haven't quite figured out why. Anyway, precious time is consumed more than once on just double- or triple-checking if you've got the rope or tail at a 100% certainty. Also, the controls fail. You see, Mario is able to make a high handstand jump, which is very handy and it works efficiently, too. You can even make a double jump. However, even the double handstand doesn't help in all situations - in those ones you need the backflip. The L and R buttons have no use in this game. If you press them simultaneously, you will be given limitless time to scan the whole area. The backflip is extremely hard to do. You have to press backwards + A just right to make it happen, and like I said, most of the time you're in a hurry. What I mean to say here is, why not just assign the backflip to a bit more practical scheme, like pressing the otherwise useless R and then tapping A once? All of the problems in gameplay come to a screaming climax in the couple of final worlds... just as I was ready to praise this game as one of the best puzzle games ever made.

If you get all three presents in each stage, you'll be granted a bonus chance in which you can win up to five extra lives. This challenge varies between a normal "stop the arrow" game and a swapping game in which you have to switch presents under Donkey Kong's crushing fist, until the last present remaining is the one you want.

Going beyond the standard gameplay and back to perhaps somewhat more satisfactory issues, each seventh stage in each area (or world) is a Mini Mario stage, in which you need to guide six Mini Marios through a puzzle room, remembering all the way that they have limited abilities, a tendency to get stuck and total ignorance of everything happening around them - you're their brains. It kind of reminds me of Lemmings... which, on the other hand, reminds me that I absolutely need to dig up Lemmings for some platform for a review. Anyway, once again there's some extra motivation to not take the easiest possible route. The presents from the regular stages are replaced by letters that spell out "TOY", kind of like the "KONG" letters in Donkey Kong Country, and only the Minis can pick the letters up, which makes getting them that much harder. Getting all letters results in a slightly better bonus chance, and has an effect on the +, as well. You don't need to save all the Minis to pass the stage, but saving them all helps you a lot...

...In the boss fights, in which each saved Mini becomes a health point. The boss fights against Donkey Kong are nothing short of epic, and counting out a couple of exceptions, these boss fights might be my favourite parts of the game - especially the last fight of the normal round, since it's so deliciously nostalgic. All of the boss fights are unique, but the basic idea is to use all resources available to damage Donkey Kong four times - by throwing enemies at him in the genuine Super Mario Bros. 2 fashion, dropping stuff on him, or simply by using quick action to turn his own artillery against him before he can even realize what hit him.

The growing problems in even the very basic controls make Mario vs. Donkey Kong a purely frustrating game to play, but it is a truly difficult game at the same time. On the normal round, the amount of actual puzzles decreases towards the end to step aside on the behalf of more straightforward platform action, but once + begins, you can say goodbye to your dignity and self esteem. The + puzzles are hellish, to say the least. Solving puzzles in theory in this whole game is just the beginning in each stage, but in the + stages, you really have to work on everything you need on the go. You need both brains and brilliant reflexes to see the game's true end.

Like I said, a while into the game I was ready to start off the review on an extremely high note, and I did, but I was also ready to end the review with a note just as high. Mario vs. Donkey Kong could've been a brilliant, unique puzzle game with incredible physics - instead it turned out a very good, still unique puzzle-based platformer with great theoretical physics, but not the seamless and all the way comfortable control to back them up. Just imagine what would've happened in any old Mario game if Mario, for some reason, refused to jump at any point when you wanted him to. In this game his occasional and seemingly random incompetence screams bloody murder.

a.k.a. Donkey Kong Plus