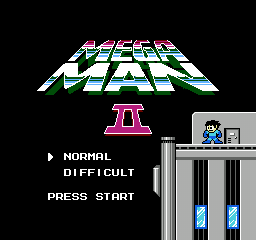 As unbelievable as it seems, 1987’s Mega Man flopped quite bad upon its initial release. Mega Man 2 brought the franchise both critical and commercial success, and paved the way for Capcom’s rise to power as one of the leading video game companies. Even today, Mega Man 2 is considered the best installment in the original series.

Dr. Light’s right hand Mega Man might’ve tried his best to set Dr. Wily straight, but some people never learn. Wily builds a total of eight new battle robots and invites Mega Man to another test of strength, awaiting his nemesis’ arrival in his new remarkable fortress, which he sets up with countless traps.

Graphically, the game hits pay dirt. First of all, the bosses look much better, and moreover, like bad guys – there are no eskimos here to spoil the party. One exception, though, Wood Man, who looks like a brown Michelin Man with a leaf growing on his head. I think they’ve just got to have one weirdo in the bunch. Even the stage select screen has gone under some heavy changes. The bosses in the final stages look awesome, and the level design is much better and varies more. The sprites of Mega Man and Dr. Wily themselves haven’t changed much, but they sit well with all the better looking stuff. This is where the music of the game truly became relevant and several tunes are considered classics in the history of video game jams.

The game suffers from many same problems as the first one – Mega Man’s physics are exactly the same and you still have to sacrifice yourself to succeed – but it pays back with a bit more forgiveness and common sense in the placement of just about everything from enemies to obstacles. The enemies do still respawn at the same crazy rate as before, though. There are a lot of useful things that make the game a more comfortable and enjoyable experience than the first one, such as health items and power-ups which show up a bit more commonly. As you make progress and destroy a certain amount of bosses, you receive up to three red power-ups – one horizontal, and two vertical lift platforms which you can manipulate. Perhaps the most important new item is the energy tank. You can hold four of these magnificent bundles of power at a time and restore your full health by using them whenever you’re in a pinch. They are naturally well hidden and should be used sparingly.

The concept of the game is pretty much the same. First, you take care of Dr. Wily’s robots who all have their unique theme. Upon beating these relatively easy bosses – it’s the stages that are the bitches in the house – one by one, you’ll have their whole artillery in stock once you’re done. You then unlock Wily’s fortress, which has several stages, and fight new bosses, and eventually, all the main bosses in survival mode. In this game, you have to beat them all consecutively instead of fighting half and half, but luckily beating each boss summons a health item. Then, it’s time to put Dr. Wily on his knees once again. Simple? Think again. Entertaining? You bet.

The game is a tad easier than the first game due to the new, unique password system, as well as the rate of power-ups and the addition of new ones – but it’s still pure hell to clash through for pretty much similar reasons. Good timing is even more essential than before, and the game requires you to familiarize with all the additional weapons for top performance. I dare to say you need every weapon and special item to beat the game... but that’s the idea, right?

It’s the atmosphere and the decrease of less welcome tension in the form of simply ridiculous situations that make Mega Man 2 stand above all the games in the original series. It’s one of the first NES games I ever played and eventually conquered, and it’s still one glorious game in its own right.

Nintendo Power ranks Mega Man 2 #33 on their list of the Top 200 Nintendo Games of All Time.

“Difficult” is the standard difficulty setting in the Japanese release.
Signed by Kuzpo klo 3.01