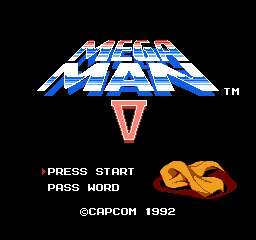 When it was officially laid down that the upcoming Mega Man X for the SNES was to be the beginning of its very own series instead of a continuation of the classic Mega Man franchise, Capcom rushed to put out a few more games to continue the original storyline and to tide fans over during the long production of the new SNES title. Mega Man 5 was released in the end of 1992, exactly a year before Mega Man X and showed nearly no signs of the critical and commercial success the spin-off series would enjoy.

Dr. Light is kidnapped by a crazed army of robots apparently led by Mega Man’s renegade brother Proto Man. Maintained by Dr. Cossack in Light’s place, Mega Man once again does battle against eight robot masters to chase down and destroy his haywire sibling.

The first thing you might notice when you get over the fact that most of it looks exactly the same, is that the tempo is faster than ever. Mega Man’s running speed and the framerate are much, much better. The rate still lags behind whenever there’s a remarkable amount of stuff on the screen, but overall it doesn’t cause much trouble, if any. The design is better than in Mega Man 4, from all points of view. The bosses look good and they’re somewhat of a return to the standards after the group of total weirdos in the previous game. The music still doesn’t quite hit it – seriously, where did the near-perfect soundtrack of Mega Man 3 go?

About 20 minutes into Mega Man 5, I must ask, seriously, how many games can Capcom do exactly the same and get away with it? Well, I guess we have to remember the ridiculous Street Fighter II jamboree going on about the same time this game was released. A few things, very artificial features, separate Mega Man 5 from Mega Man 4. Let’s take a look at Blue’s arsenal. Rush’s Marine ability has been left out, which makes sense since we didn’t need it at all in 4. The Coil ability has changed. Whenever you use it, Rush jumps with you, which makes the jump much weaker, and therefore, completely useless. That leaves Jet, which is still the same, but you don’t need it a whole lot. Rush is totally useless and irrelevant in 99,9% of the game. Eddie’s still in and he works in the exact same way as in 4 – he comes to greet you every now and then and presents you with a random item. Mega Man has one more new item, a Mega Arrow – or something like that – which you can use as a weapon or shoot it to a wall and use it as a platform. In the latter sense, the Arrow is way more practical than Rush in this game. In every main stage, there’s a letter icon. By finding them all – which isn’t hard but getting them is – you’ll spell “MEGA MAN V” and unlock Beat, a bird buddy who’ll be of great help in some battles.

The boss fights are... well, hard. It’s extremely difficult to get started, if you don’t get it right on the first lucky guess. Even if you know which weapon to use on who, you’ll still have a lot of difficulties with some of these guys. Energy tanks are quite rare, even if there are a few different kinds of them this time around. Well, the bosses are cool, although again some are clearly recycled from earlier concepts. Still, this is by far the only Mega Man game in which I’m not amused by the presence of a single boss, all of them can be taken quite seriously. Lastly, I don’t want to spoil the plot – although this is one game series in which you always know the ultimate outcome, it just plays out a bit differently – but I’ll just say the order of things is exactly the same as in Mega Man 4. So have we done this before? Yes, only this time it’s harder.

Mega Man 5 is indeed a bit harder than Mega Man 4 due to the bosses and stuff that requires not only getting some used to, but also a bit awkward way of thinking. For example, there’s a vertical stage in which you have to collapse the building you’re in to be able to proceed upwards, and of course the place is filled with spikes and other well placed hazards. If you’ve beaten the last two games, especially Mega Man 4, you should have no big trouble with the game in general.

The game simply does not have enough new features to keep a guy who’s played and beaten all the previous games interested. Moreover, back in the day when NES games were actually expensive retails, I don’t get why anyone would’ve bought each and every Mega Man game as a fresh-out-of-the-oven product. Ironically, I know a guy who was such a Mega Man fan. He had no complaints, and I got to borrow all the Mega Man titles from him, so I didn’t complain either. On the other hand, it was his dad who paid for them.

A remade version of the game is part of Rockman Complete Works, which was released on the Sony PlayStation in 1999.
Signed by Kuzpo klo 4.01