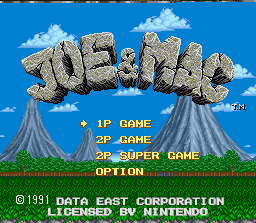 Despite its stupid and totally irrelevant North American title – originally Fighting Cavemen, which was way more appropriate – Joe & Mac – Caveman Ninja was a moderate hit in its time in both arcade halls and home sales. As a standard platformer it has stood the test of time quite well, and out of all the numerous prehistoric platformers of its time (Chuck Rock, The Flintstones, Prehistorik Man) Joe & Mac is probably the best one. Of course, that doesn’t really spell out “miraculous”.

Joe and Mac, best friends for life, are the coolest and most swinging dudes of the prehistoric era. A group of neanderthal nerds holds a grudge towards them since they take all the best women. They kidnap Joe and Mac’s girls and place them in the guard of some of the vilest, meanest and biggest tyrants of their homeland, unaware of tough the fighting cavemen actually are.

The graphics... hmm, not bad at the time, not at all. A very basic arcade port of the era, although in general there are many differences between this game and its arcade counterpart. The framerate’s good, there’s a minimal amount of graphical glitches and the animations are funny, in a generic comic book way. The sound effects and the music are problems in themselves, though. Both Joe and Mac let out an ear-piercing screech whenever they’re hit... dude, they’re dudes, not some “Alfred Ashford”-freaks... and the music is bound to get on your nerves at some point. Luckily it’s not the kind that draws a lot of attention during gameplay, though.

Because at least this port bears so much similarities to the Flintstones games on the NES, including the prehistoric theme, certain but artificial non-linearity and even a large part of general gameplay, it’s hard not to compare this to the first Flintstones game, which came out a year later. What’s funny is that it’s rather a stripped version of Joe & Mac than the other way around, although all of this would’ve been easy to apply to an NES game – after all, an NES port of the game was released. The action is indeed limited to a very small amount of different moves. Two buttons execute the very same jump, and other two buttons the very same attack. Select button switches between the different weapons Joe and Mac can use on this little trip of theirs, and pressing up while jumping results in a vault jump, which takes them to slightly higher ground. A trademark Fred Flintstone club is the basic weapon, but during their travels the cavemen find all sorts of different projectiles from boomerangs to fireballs, which can be thrown to several different directions. All of these can and should be carried simultaneously, ‘cause all of the weapons have their better and worse qualities. Usually lack of range is the main problem with the most powerful and effective weaponry. What’s kinda interesting is that even though you can’t defeat enemies by jumping on them, you can stand on most of them if you land in the correct spot, and use that feature to your advantage on a lot of occasions, such as the very beginning of the game.

You can’t pick your character. If you play alone, you must play as Joe. Just like in any old Mario game, your friend uses Mac whenever you decide to co-op. In both multiplayer modes, though, you both play at the same time, there’s no switching between deaths like in the Mario games. Your goal is to get to the end of the game (duh), beating surprisingly many stages filled with rock, lava and *sigh* ice. Every stage has a relatively good-looking boss fight and a fair deal of the stages are in fact boss fights disguised as regular stages. The bosses are large in size, and the difficulty is very progressive and consistent. I like them a lot, although the common idea is quite simple; any boss’ patterns change randomly, but they’re easy to learn. Take your time to observe, then effectively beat the shit out of ‘em, avoiding death at all costs. What’s cool about dying in the game... can’t believe I said something like that... is that as long as you have extra lives you are able to just continue from the spot. Your character turns into an angel and you can fly for a short time to get to a good spot, and then keep hacking on. This feature is especially great with deaths relating to chasms which are particularly tricky to cross. Some boss fights practically force you to save up on the very few extra lives offered up during the course of the game, just for the purpose of sacrificing yourself for the greater good.

There’s not much more to say, really. It’s a basic platformer. One thing that really bothers me about it is the continuing system. You see, you have three continues, but the game itself never makes it quite clear. The first time all your lives are drained, the game just prompts you to decide whether you want to go at it again or not, and it really looks like the continues would be infinite. That would make sense too, because the game is moderately tough and lengthy on the scale of arcade, and finding all the keys to the bonus stages scattered across the world map takes up a lot of precious and often wasted time. Some of them feature a miniboss battle which results in the rescue of one additional girl, some of them are just for collecting minor power-ups. The save points on the world map are just for show. Firstly, you can’t actually save the game, and secondly regardless of the save point’s location, you’re always able to continue from the stage your game ended in – so they don’t quite make sense. Back to the subject: the continues. This is a personal scenario of mine. I was in the very final stage and I reckoned the final boss would require more lives than I had at that point, so I intentionally flushed the only life I had left down the drain, and was ready to really go at it with a clean slate. Instead of taking me into the Continue? screen as I thought, the game just mercilessly announced “Game Over”. I cursed like hell; did I miss something here?! If there were only three continues in the game, I would’ve been extremely glad to know that about a dozen stages and boss fights earlier. Oh well, now YOU know; you’ll probably take the game a bit more seriously, I reckon. On the first time this is quite a shock, because the game ain’t exactly the easiest platformer around. Basically it’s not that bad, no, but keeping a balanced amount of lives intact is, considering the extra-rare occurrences of 1-Ups.

The game gets quite tough after a while on all accounts – the stages themselves, and the boss fights. The secret of the three continues adds a bit to the challenge, most of all the challenge of wanting to play again right after experiencing the first total defeat in the worst possible phase; the last boss is a great example. Once you try it again and know the name of the game that time around, and keep a tight focus on your health, it turns quite a bit easier as effective ways to beat a large bulk of the game are still fresh on your mind.

Joe & Mac – Caveman Ninja (which is still one of the most irrelevant titles I’ve ever heard) is a good game, but maybe a bit unfair; even if the home port is as far as possible from the original arcade version, it still has some of that merciless arcade unfairness left in it. Being such a basic, standard platformer, it also easily disappears into a critical mass of its kind and time. It would actually be quite unmemorable if it didn’t spawn such a trend for platformers, relating to stoneage. Out of all those games, Joe & Mac is the best one when it comes to gameplay.

There are several notable differences between the arcade and home versions. In the arcade version, there is no world map, there are more weapons and each of them can be charged up, the final boss is different and there are multiple different ending sequences.

The game spawned two sequels and a spin-off. Joe & Mac 2: Lost in the Tropics and the spin-off game Congo’s Caper were released exclusively for the SNES. Joe & Mac Returns was released in arcades only.
Signed by Kuzpo klo 1.44