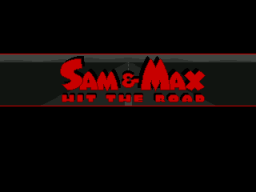 Sam & Max Hit the Road is one of the many classic LucasArts adventure games that set certain standards for the whole point ‘n’ click genre, standards which were never met by the few publishers that were daring enough to challenge George Lucas’ acclaimed empire. Sam and Max are also two of the most loved characters in the SCUMM universe, and they have since inspired Telltale Games to come up with a whole series of semi-official Sam & Max sequels. LucasArts’ experiment with anthropomorphic animals as main characters instead of quirky humans turned out profitable, and for a very obvious reason. For the most part, Sam & Max Hit the Road is a damn funny and intelligent game.

“My mind is a swirling miasma of scintillating thoughts and turgid ideas.”

A carnival tour is brought to a halt when two of the circus' most profitable freaks, Trixie the Giraffe-Necked Girl and Bruno the Bigfoot go missing. The slick dog detective Sam and his partner, the mentally disturbed rabbit Max take it upon themselves to solve the mystery behind the odd couple's disappearance. Their investigation takes them all the way from the World's Largest Ball of Twine to a crocodile infested golf course, to crossing paths with an ill-tempered and narcistic country singer.

I liked the cartoonish style of LucasArts' previous masterpiece Day of the Tentacle and they took it to whole new levels here, seeing that a great deal of the characters in the game are anthropomorphic toons. This enables the proper use of some wicked animation. The animation in general pales in comparison to games that followed, and the inability to scorch out the rough pixels even with the newest and best emulators via buffering is a drag. Even so, as a fan I like what I see.

The voice acting is great and breathes whole new life into the characters, especially our two heroes. Sam & Max Hit The Road would be no less than well over a half less entertaining without the crazy, spoken dialogue. The soundtrack is decent; basic upbeat stuff and repetitive, yet catchy jingles everywhere Sam and Max wander to on their journey.

Sam & Max Hit the Road was the first game to ditch the traditional SCUMM interface since its establishment in Maniac Mansion and later development in several games. The new interface was used for the first and last time in a LucasArts game, but it has since crawled into several games released by other companies… what a shame.

Although generally extremely fun to play – especially since you never know what crazy idea might actually work – the user interface might turn off a lot of people. Basically, you toggle functions with the right mouse button until you find the right one. If you do something wrong, it goes back to the default function (Walk) and you'll have to toggle the list all over again. This is especially frustrating in scenes which require fast judgement and action. Luckily they swapped this whole idea with the unified action icon in the future SCUMM games.

The best new concept of Sam & Max's gameplay is that Sam can actually converse with Max, if the player is confused about what to do next or feeling lonely, or whatever. This is small potatoes compared to the fact that Sam can actually interact with objects using Max anyway he pleases. Trying not to spoil it all to people who've never finished the game, Max can be used to reach places Sam can't with his bare paws, and even as a tool to cut off electric currents. Hey, nothing works better than a wet rabbit. This cool quirk enables the player to try out just about anything (s)he wishes.

The somehow intelligent craziness of the puzzles and the sheer size of the game make Sam & Max one of LucasArts' most difficult titles. Frustration is inevitable, also due to the gameplay in addition to the puzzles, but something will surely make you come back for more over and over again, and if you have any brain for these kinds of games, you will eventually beat it.

Sam & Max Hit the Road is a classic, cartoonish adventure game which is somewhat dragged down by pointless function toggling instead of classic SCUMM. If you're here for humour, or for some really tough puzzles or the torture of rabbits, you've come to the right place.

The Sam & Max franchise is based on a series of comic books written, drawn and published by LucasArts' Steve Purcell. The first Sam & Max comic book was released in 1987. The nature of the comic books is more adult-oriented than that of the game. Sam and Max first appeared in a LucasArts game when they did a cameo in The Secret of Monkey Island in 1990.

Bernard from Maniac Mansion and its sequel Day of the Tentacle makes a cameo appearance as the Snuckey's clerk.

Like most LucasArts games, Sam & Max Hit the Road references Indiana Jones and Star Wars moderately often. When Shuv-Oohl loses contact with the other bigfoots, he says "It's like several voices screaming out in terror... and then suddenly silenced.", like Obi-Wan Kenobi in A New Hope. Using the cleaning droid manual reveals a hologram recording of Princess Leia (R2D2 himself makes an appearance in the end credits). Using the eggplant to steal Conroy Bumpus' toupee is reminiscent of the opening scene in Raiders of the Lost Ark.

Max went on to appear as a cameo in every single LucasArts title after the release of Sam & Max Hit the Road, until the franchise became Telltale Games’ property.

The Sam & Max franchise was taken over by Telltale Games in 2005, who have since released many 3D Sam & Max games in the classic point 'n' click style. The games, known as the Freelance Police series, have gained a strong cult following.
Signed by Kuzpo klo 3.02