REVIEW - Adventures in the Magic Kingdom (1992) 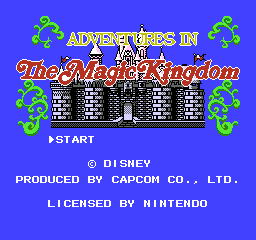 Capcom and Disney were very tight in the late 80’s and early 90’s; most of their early co-operative works, such as Chip ‘n’ Dale – Rescue Rangers and especially DuckTales, are some of the most essential NES games of all time. One of the most obscure Capcom/Disney products for the NES is Adventures in the Magic Kingdom, which isn’t a licensed game. Instead, it’s more of a playable Disneyland ad. Any good? I wish it was.

I doubt Disneyland’s this boring

A big parade is about to be held in Disneyland, but Goofy has forgotten the golden key – a trinket which is essential to the party – inside the castle. To open the gates and retrieve the key, Mickey, Donald and Goofy need six silver keys, which are hidden around Disneyland. Mickey hires a random visitor to help out and find the six keys.

Generally, the graphics are OK. It looks like Capcom’s interest in the game’s production faded in midway, though. Some stages simply look a lot better than others; the game isn’t very consistent on the graphical front. The music is decent, basic Disney fare – cheery, and loveably irritating.

We start off by naming the main character, a boy scout who looks worse than Kurt Russell in those old flicks Disney produced in the 60’s. The only possible names I can come up with just by looking at the main character are “Dork”, and even more preferrably, “Cock”. Don’t let your kids read this, by the way. Seriously, no self-respecting kid dresses like that and parents who have some respect towards anything would never force their children to wear such clothes. Our game begins on the Disneyland map. There are several completely different stages in the game. All of them must be beaten in order to beat the game, but you can choose the order yourself. The map is a stage in itself, so let’s start with that.

The goal is to find Pluto, who has one of those silver keys attached to his collar. He can be found by talking to several children around the theme park, and answering their stupifying trivia questions concerning the long history of Walt Disney’s works. There ain’t a lot of different questions, and the kids’ dialogue is just stupid. Their only explanation to why they’re asking such half-assed questions is that they don’t believe you’re a friend of Mickey’s. And they are? They’re kids, about the same age as the main character! What the fuck? How in the hell would they know the answers to everything they ask? The questions range from super easy to ultra hard, there’s really nothing in between for those who know anything about Disney. After a disturbingly long session with those stupid-ass kids, you finally find Pluto and a kid that’s smart enough to remove the key from his collar so he won’t run away with it, and ask two questions instead of one. Keep your fingers crossed, ‘cause if you mess up with the second question, you’ll have to answer them both again. This “stage” would be more entertaining if there were more than about 20 different questions, and if the whole walk around the park searching for those bastards didn’t feel so pointless.

Let's go from left to right, then. On the left edge of the park there are two platforming stages, arguably the hardest stages in the game, 'cause Cock has crappy physics. The height and length of his jumps seem very random, and contact with enemies is frustratingly hard to avoid. In the Haunted Mansion, your goal is to climb to the highest floor using possessed chairs as elevation. The only way to get rid of enemies is throwing candles at them. There's a limited amount of the candles, but the game is very generous with extras. The biggest problem in this stage is your character's ridiculous jump backwards every time he gets hit. The problem becomes very evident in the mansion's library, where there are enemies coming from the front all the time, below you there's nothing but a wide bottomless pit, and if you miss one shot at an enemy, it will very likely push you off the narrow, horizontally moving chair you're standing on, into that pit. Upon trying again, you are forced to start the whole stage over. That's right, there are no checkpoints at all. When you finally make it to the top floor, the only boss battle in the game occurs, against a ghost that is exactly the same as the standard ghosts, it only takes more candles to dispose of 'em. At first, it feels incredibly hard to avoid the ghost's attacks, but there is a pattern that always works.

In the beginning of Pirates of the Caribbean, you have no weapons at all. Your goal is to survive another physically limited platforming stage, and rescue six maidens held captive by pirates. Near the end, you will receive an infinite, golden candle, which you can use as a weapon, and also need it to light the fire at the end of the stage. That last thing you have to do is only mentioned in the beginning of the stage by Mickey, so if you're not counting the maidens and can't find anything else to do, just walk to the end and light the fire to get the hell out of there. If the time limit expires even after you've rescued the maidens, you're forced to start the stage over, once again. What's the point of having lives anyway? Oh yeah, and if you're wondering, the time limit is invisible, in all of the stages you have one – which equals just one, in addition to these platformers. The only way to see your remaining time is going to the pause menu.

Above the castle, there's Big Thunder Mountain, a chaotic, top-down perspective train track with four different paths to choose from. Only one of these paths is the correct one, and all of them are filled with obstacles ranging from dead ends to rocks and gates. The rocks and gates are easy to avoid by just braking in front of them. If you go to a dead end, that's too bad - start over. If my memory serves me correctly, path number one from the left is always the correct path. This is easy as hell, as long as you are able to avoid the dead ends.

Second to last, we have Autopia, a racing stage which reminds me a bit of Micro Machines. Only, Micro Machines is a fun game. It seems that Panhandle Pete has stolen a silver key and will only forfeit it if you beat him in the race. Uh, no. Pete wouldn't give up that easily, and the fact of the matter is that it doesn't matter if you beat him. Actually, cars just spawn randomly in the stage. There's no competition at all, you just have to survive the stage and its obstacles. Again, braking in front of gradually expanding bridges helps, and off-road jumps – which result in death – are incredibly easy to avoid. The worst problem is the time limit, which is quite unforgiving in this stage, so don't be too trigger happy with the brakes.

Last, we have Space Mountain, which is very simple. You have to navigate your ship from star A to star F. Directions are given to you by the monitor in the bottom of the screen. All you need to do here is follow the directions, and shoot the occasional, incoming meteors and enemy ships. There, we have all the keys, so let's go to the castle. The parade starts and "END" comes onto the screen, with all the main characters smiling to you. You know how long it took? 22 minutes. That's right, I timed my last playthrough from the gate to the moment I entered the castle. I even died a couple of times. Your pretty penny for 22 minutes – or less – of generic, unrewarding gameplay. OK, I'll give the game this much: I liked it when I was 8 or 9 years old. I'm 26 now, that might have something to do with the fact that I feel ripped off and completely drained of excitement.

Challenge? Well, I kinda answered that already... the two platforming stages are nothing more than frustrating, that’s all, and all in all the game is incredibly easy, and short as hell to boot. Remember the 22 minutes. However, Adventures in the Magic Kingdom ain’t exactly a bad game. Actually, I don’t consider it to be a game at all. Only a shameless plug. Simplistic, easy fun for kids, who will probably clash through it a couple of times just because of the appealing theme, but in our reality, there’s no replay value at all.

a.k.a. Disney’s Adventures in the Magic Kingdom

The game's title and cover art suggest that the game's events take place in Walt Disney's World's Magic Kingdom in Orlando, but the in-game attractions and the map layout have more in common with Disneyland, which is located in Anaheim.
Signed by Kuzpo klo 23.14