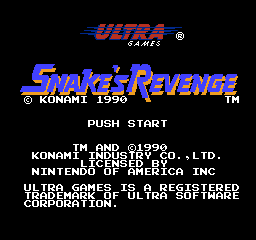 The story behind Snake’s Revenge is quite complicated. In short, what we have here is an NES-exclusive sequel to 1987’s Metal Gear, which franchise creator Hideo Kojima had absolutely nothing to do with. When he heard that Konami was developing a new Metal Gear game without a proper permission from Kojima, the stubborn designer went on to create a sequel of his own to piss off his employers. Metal Gear 2: Solid Snake was released exclusively in Japan on the MSX2 a few months prior to Snake’s Revenge, which on the other hand wasn’t released in Japan at all. Kojima’s version of a Metal Gear 2 became a cult favourite and later, an official part of the Metal Gear timeline, while Snake’s Revenge, despite some random critical acclaim, is disregarded by most fans of the franchise as a black sheep and a fake.

Three years after the destruction of Outer Heaven and Metal Gear, Lt. Solid Snake is called back into action by FOXHOUND, who have learned that a new Metal Gear model is being developed at an undisclosed, hostile nation led by a wealthy Eastern warlord.

The game looks better than the previous game on the NES. At first it looks like the same thing in different colours, but there are definitely more details and colours, and everything simply stands out better. The rare side scrolling sequences look good. The music is still excellent – “Solid Snake” is some serious kick-ass stuff – but the sound effects are pure murder. The alert is horrible and none too rare.

I’ll start by telling you to take the stupid-ass plot and stuff it. “Higharolla Kockamamie”, my cock. The game’s plot is embarrassing. You really need to disregard it completely and stop thinking it has anything to do with the series’ timeline. What I want you to do is just concentrate on the content, not the plot. Are we on the same page here? Sensational!

Next, I’ll make a bold remark to piss the purists right off: Snake’s Revenge IS, by all means of gameplay, a better game than the NES version of Metal Gear. I hate the plot, yes, but I’ve learned to discard it from my mind a long time ago and simply play the game. First of all, it takes off quicker. No more stupid “Uh-oh! The truck HAVE started to move!” type of bullshit, just plain exploring in the jungle, and for a very short period, AND with a decent weapon at your disposal. Indeed, the first building ain’t too far away from the start, and upon dying you get to restart from the beginning of the last floor you entered; you don’t need to start over from the first screen, nor do you absolutely need a password to get closer to your “burial spot”.

Unfortunately, you don’t get to keep all the stuff you collected before your death, unlike in the first game – which means you have to go out of your way to collect it again – but it’s definitely the lesser of two evils. The only thing that really bothers me in the beginning of the game is the erratic behaviour of the searchlights. Whether they catch Snake or not is highly random, and whenever you leave a screen and come back, the searchlight is magically waiting for you right on the other side, right above Snake’s head. You can’t avoid ‘em. Again, not much justice to the “stealth” part of the concept. Just like the searchlights, the enemy soldiers’ field of vision and movement is very random. Sometimes it definitely feels like they’ve got eyes in the backs of their skulls and they respawn quicker than you can say “ass” – every time you leave the screen and return. Well, at least the glitch of them respawning once you open and close the menu is eliminated. The menu isn’t quite as hard to use as before, and the radio ain’t much of a nuisance, but the problem(s) with the key cards is still very, very present.

A quite minor, but often mentioned feature exclusive to the game is the extended use of side scrolling 2D. This is indeed quite rare, and never involves any combat. It’s only real purposes are to portray Snake’s progress from a different angle, and to make the inclusion of underwater sequences possible. I can’t help but feel that these have somehow, even if just remotely, influenced the underwater sequences in Metal Gear Solid 2 and 3. Also, the mere idea of a cybernetically enhanced Big Boss – was that a spoiler...? – reminds me of Solidus Snake in Metal Gear Solid 2. Coincidences? Probably, but they’re fun to point out in any case.

Elimination of some of the nastiest shit Metal Gear threw on us players makes Snake’s Revenge an easier game, to enjoy and beat, but it’s still quite tough and lengthy. It’s a good game, which suffers from some of the same problems with gameplay that plagued the NES version of its predecessor, as well as the utter irrelevancy of stealth, AND an absolutely horrible plot that the Metal Gear universe has been wise to erase from the pages of history.

Hideo Kojima’s ultimate opinion on the game isn’t quite clear. He has said, even though he wasn’t involved in the game’s development at all, that he holds it in higher regard than the NES version of Metal Gear.

Hideo Kojima was actually advised to make a Metal Gear sequel of his own by one of the main designers of Snake’s Revenge.

The instruction manual is inconsistent with the game’s plot. Higharolla Kockamamie, who is supposed to be the primary antagonist and whose name is a parody of Ayatollah Khomeini – the former supreme leader of Iran – makes no appearances in the game, nor is he ever even mentioned. Also, in the manual Metal Gear is referred to as the Ultra-Sheik Nuclear Attack Tank.
Signed by Kuzpo klo 4.48