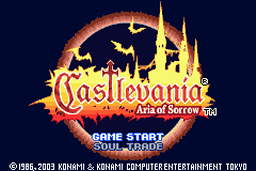 In addition to their commercial trump cards Metal Gear and Silent Hill, Castlevania games released exclusively on Nintendo’s handhelds have been one of Konami’s primary sources of income after the turn of the century. All of the games have enjoyed enormous success, and have introduced the company’s most legendary and long-running franchise to a new generation of gamers. Aria of Sorrow was Konami’s third Castlevania game released exclusively on Nintendo’s handheld wonder Game Boy Advance, and it’s probably the most popular of them all in every sense, due to its working combination of a classic Castlevania game, gameplay straight out of Metroid, and character development in a true RPG style. I know you’re thinking that they came up with the formula years ago with Symphony of the Night, but frankly, I think this game is better.

May an eclipse fall on the plot, but the game be praised

In 2035, 36 years after a group of several Belmont family descendants utterly destroyed Dracula and sealed his power into a solar eclipse, an age-old prophecy of the Count’s reincarnation attracts a group of people to find and enter his castle inside the eclipse. One of them believes to be Dracula’s hand-picked reincarnate, while the others try to stop the man at all costs from indeed inheriting Dracula’s power. A student named Soma Cruz starts his day by going to the Hakuba Shrine together with his childhood friend Mina to see the first eclipse of the 21st century, but ends up in Dracula’s castle and fighting hordes of monsters by using his inexplicable new ability to devour their souls.

For a pre-DS handheld game, Aria of Sorrow looks simply awesome. It’s kind of hard to tell from these lame ass screenshots, but visually the game IS very impressive, believe me. Nice effects, excellent character design and much depth in both colouring and the background work. It really feels like playing a full-blooded SNES game on a small screen. The music... well, it’s Castlevania, so it can’t be bad by any measure. It’s very good, but I miss the true drive here, and the game is one of the only ones in the series to leave out all classic tunes that have branded the franchise from its humble beginnings. I know it must be extremely hard to come up with stuff right on the par with the classics, so I’ll forgive ‘em since the game is excellent.

Don’t go head first into the game thinking of all the past Castlevania games you’ve played. The game is very similar to Symphony of the Night in a lot of ways, but it plays out more comfortably, practically and altogether, better. Originally, Aria of Sorrow was the first game in the series I played since SNES’ Dracula X, which was more than lackluster. I read a few reviews of the game, very quickly just to get to the conclusion, and there was a lot of praise. At that point, I had never touched even Symphony of the Night. I thought: “what the hell, I’ll give it a shot, maybe they’re on the right track with this style they call Metroidvania”. Are they? After the first five minutes into the gameplay, I was hooked like a motherfucker. A traditional game? Hell no. An amazing game, one of the best Castlevania installments ever? Hell yes! Screw the stupid-ass anime plot and the crappy dialogue, let’s go over most things great about the game.

Like I said, the game plays out like Castlevania infused with a large dose of good old Metroid, like Symphony, yes, but with some welcome limits that prevent you from wandering around endlessly, but still allow non-linear progress with a few different destinations you’re able to reach with the skills you have at your disposal at the moment. The castle is much easier and more fun to explore than in the completely, a little too open Symphony. The game is set in the year 2035. This doesn’t make the game any more “Metroid”, it’s just a storyline thread and there’s virtually nothing futuristic about the game, ‘cause all of it takes place in the interiors and close exteriors of the good old castle. But, the map... once you get it... Metroid, anyone? The system’s the same: as soon as you visit a certain location, it changes colour on the very simple and easily read map. Every corner and room you haven’t checked out yet, maintains its original colour, meaning you should check that small space out as soon as you gain some certain ability. Most minor abilities, which are purely optional, are gained by killing a certain amount of certain types of enemies. Soma devours the monster’s soul, and voila, you have a new ability which is explained very simply by a following message on the screen. Most of them are different offense and defense methods. The abilities you need to make progress in the game are enclosed inside golden pillars, which you’ll find hidden around the castle.

Like in Metroid, you start off very incompetent: your jumps are pretty pathetic, you’re armed with a lousy pocket knife, you have practically nothing to defend yourself with. After a few hours of playing, you’re a living, breathing killing machine, an angel of death if you will, with divine armour, all sorts of weapons ranging from broadswords to whips and you even have wings to fly with at your disposal, and the wicked souls of dozens of enemies to use to your advantage at a measly amount of MP. It’s not just useful to find all you can in this game, it’s also fun, and what’s even more fun is that you can customize Soma’s directly available abilities all you want any time, in the menu screen. The menu is straight out of any classic RPG you can think of, and much, much easier to use than the awkward one in Symphony (come on Symphony die-hards, gimme your best shot already – I dare ya!). You can change Soma’s equipment and modify his abilities to what serves you best at the moment, read through a notebook filled with information on the enemies you’ve killed and the souls you’ve devoured, and follow the growth of your combat level. That’s right, you can, will and must level up in this game, just like in any RPG. Your level goes up moderately slow at first, but the battles become more challenging and fruitful after a surprisingly short while. The key to success is to level up and be smart with both your equipment and abilities.

You’re probably thinking about how to gain weapons and armour. Well, first you’ll only find new equipment lying around in corners – some in plain sight, some are somewhat hidden, and also behind breakable walls. After you’ve reached a certain point in the storyline, you’ll meet a guy called Hammer, a United States Army soldier who sets up shop at the front gate. The variety of products he sells changes in real time as you progress, and it’s always wicked. Hammer’s way ahead of the game. His merchandise is very expensive, though, so keep on hoarding that gold you find. Money talks, bullshit walks, remember that. Like in the shop in Symphony of the Night, you should always read Hammer’s list carefully before buying anything, because if you hurry to buy the first new weapon you see, it’s very likely that you’ll find an even better one from the bottom of the list, and can’t afford to buy it at that point. What they should’ve made to make this game a further drop better is a Hammer Shop, found in several corners of the castle, because the amount of new equipment on each visit is ridiculous – you simply can’t afford everything at the same time – and if you run out of health items in the upper floors and really need them, you must backtrack to the front gate, or alternatively find the nearest warphole, and consult Hammer. Trying to find health items lying around is just a waste of time. This is the game’s greatest flaw, but by far, one of the only ones.

What I like most about the design in the game is that the doors are well marked. A red door is a passage to another area, so if you feel you’ve missed something, you should double check everything before passing through. A blue door, on the other hand, means that there’s a boss prowling on the other side of it, so if you haven’t saved in a while (the saving happens in another Metroid fashion) or have doubts, leave it and level up some more. You simply can’t blame the game if it “misleads” you or doesn’t go the way you want it to. It gives you clear tips on what and what not to do. I love it, it’s so not Symphony of the Night! OK, that was the last stab at the classic – I like that game, too, I’ll have you know. It’s just overrated, that’s all.

You do know how an RPG works, don’t you? A role playing game usually isn’t difficult, it’s long and beating it depends a lot on the player’s efforts to develop his/her character. If you have enough patience to level up and max up Soma’s abilities, you should have no trouble in beating the game, eventually. Challenge simply isn’t part of the actual excitement of RPG’s, it’s the game itself, and character development. Also, general choices and strategies play important roles. Aria of Sorrow plays out just the same, most of the time. There are later, more traditional Castlevania type of parts of the game which are truly difficult and evoke lots and lots of cursing, while the first few hours into the game primarily consist of leveling up and gathering abilities in the traditional role playing way. The difficulties involve both platform jumping and fighting. All in all, Aria of Sorrow is a quite challenging game, but if you’re an RPG veteran, you’ll have a slightly easier time with it, that’s all I’m saying.

Castlevania: Aria of Sorrow is one of the best Game Boy Advance games I've played, and solid proof that Konami can still come up with something exciting in the quite inconsistent, yet classic game franchise. Despite the wishy-washy plot and some small flaws, the game is quite simply put the best Castlevania game since Super Castlevania IV.

a.k.a. Kyassuruvania: Akatsuki no Menuetto (JAP)

Nintendo Power ranks Castlevania: Aria of Sorrow #22 on their list of the Top 200 Nintendo Games of All Time.

In the North American and European versions of the game Soma Cruz is an exchange student studying in Japan, while in the original version he is a native.

Castlevania: Dawn of Sorrow released for the Nintendo DS in 2005 is a direct sequel to the game, and also features Soma Cruz as the protagonist. It is the first direct sequel in the whole series since 1987’s Castlevania II: Simon’s Quest.
Signed by Kuzpo klo 7.32