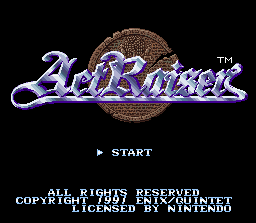 Wanna be God? Before uniting with their longtime rivals Square in 2003, Enix was most known for their own RPG’s, especially the Dragon Quest series, but in 1990, the company broke a mold with a little classic called ActRaiser, one of the most important and influential games of the early 90’s. If you have doubts that a combination of SimCity and Castlevania, spiced up with some RPG flavour could actually work, you really should get familiar with ActRaiser. Chances are it’ll blow you away.

Hundreds of years since his power was sealed by an evil demon known to the people of the Earth as Tanzra, a God-like entity referred to as Master awakens from his deep sleep to find the world in chaos, inhabited by hordes of monsters, and just a handful of people fighting for survival and hiding, waiting for the Master’s return. Descending from the heavens, Master takes the form of an ancient warrior and begins his quest to rid the world of the foul beasts and their leader, his arch nemesis Tanzra, and restore human civilization.

The game is divided into two parts. The action sequences have a strong scent of Ghosts ‘n Goblins and Castlevania. The backgrounds look quite nice and the graphical design of the action sequences is overall great. Character animation is admittedly a little stiff and the enemies look quite dumb as they’re moving on invisible tracks, but their fairly unpredictable attacks compensate for that. The visual presentation of the city simulation is familiar stuff to anyone who has played the SNES version of SimCity. The gradual development effect passed on to that game is a quite nice touch. The interface is pretty much the same, too. All different locations have unique landmarks which set them apart from others.

ActRaiser is famous for its music. The game is indeed full of the most dramatic and actually the least repetitive music I’ve heard in most games released during the same time period. The background music during city building might start to annoy you after a while, especially since you’re going to be doing that for the most part of the game, but the battle music stays relatively fresh all the time.

Let’s get back to the two parts and break them down. Once again, ActRaiser is about both platform action and strategic city building simulation, which also features a bit of shooting down monsters. Each one of the six “stages” in the game starts off with an action sequence, so let’s start with those. The action in the game is as basic as it gets: jump, hack, slash. Some nice innovations come along in the later parts of the game, such as shapeshifting and/or corrupting platforms, to keep up the sweat and a tight pace. Each sequence ends in a boss battle which is usually relatively epic, considering the game’s age. With just one or two exceptions, each boss requires strategy in contrast to the otherwise linear action... but that doesn’t mean it’s easy. First of all, there’s a time limit. You need to keep moving all the time and sadly Master isn’t the most agile action hero around. Each one of the stages has two action sequences – like I said, each of them begins with one, and you have to meet certain criteria to get into the second one. After that’s done, the stage is practically over, but you might want to go for the best possible result and focus on the simulation. It’s good strategy for the final battles, since the more your people thrive, the faster you level up.

For the most part of the game you’ll be helping your people to regain grip on civilization. During the simulation, you control Master’s barenaked, angelic henchman. Your objective is to show the people how and where to build, while defending them from monsters. Each stage has a few monsters’ lairs, which are represented by blue emblems on the ground. You should focus on building on top of them, so the people can exorcise the demons and seal the lairs for good. After each lair from one stage has been sealed, you are taken to that stage’s decisive battle. After you’re done with it, you can take your time in that area to help the people without having to worry about any enemies. Some of the lairs are well hidden, and to find them, you need to use your powers to control the weather. You have sunlight, lightning, rain, wind and earthquakes at your disposal, and all of them will matter during the course of the game. In addition, the people will help you, as well as their peers in other lands, with offerings that range from regular power-ups to spells to key items to special items which are a great help to inhabitants of another land. Using all of your different abilities and powers, as well as intense construction work, will aid you in becoming practically invincible in battle. The simulation might take a turn towards being really tedious at some point, but once more: focus on it, it’s for your own good. Oh, and be sure to change the message speed to “Fast” in your Sky Palace’s menu. Seriously.

Leveling up happens in a genuine RPG fashion. The more people that inhabit the world you’ve created, the more maximum HP you gain (you start off with a totally pathetic life bar). MP is gained via offerings and by collecting it during the action sequences, but the development of HP is solely dependent on the development of your civilization. I enjoy the system, even if I blew my nerves more than a few times during the action sequences due to low HP, which I had absolutely no chance of developing further at the moment. Yet overall, the game is a rare retro title since putting the player in a completely hopeless, impossible situation does not happen, ever.

Like in so many retro games, there is definitely some sort of language barrier. The game’s English is not from the worst end, but I can’t help but crack up every time I read a sentence like “This is the city you helped developed.” It’s amusing rather than annoying.

The difficulty of the game isn’t very consistent. The action sequences are generally very hard and will have you cursing life itself, but even in the later parts of the game, there are some ridiculously easy ones as well. The last boss fight is tough, no matter how well prepared you are. The simulation isn’t difficult at all. It just requires patience, and its main purpose besides all the advantages you gain from it is the long moment of peace you get between really getting it on with the enemy hordes. The angel can’t die, he only loses his ability to shoot arrows if his HP is drained, and it replenishes with time. The simulation simply can’t end in your defeat. Now that I think of it, neither can the action sequences, ‘cause you’ll be able to try again immediately with full stats, you just have to start the stage all over again. ActRaiser’s one of the easier games of its time, but not a piece of cake by any measure.

What can I say except for the word “like”? ActRaiser is one of the most unique and innovative video games of all time, and its influence is so rarely seen in large proportions that I would gladly vote for the development and release of a new-generation game based on the classic ideas. No jibberish, no overtly technical mumbo jumbo needed, not necessarily even 3D. I would most certainly buy a simple rendition with at least some tweaks and spend hours with it. This game deserves a proper sequel, or simply a remake, not to take away from the power it already possesses in its original form. Although I don’t quite buy the Christian overtones (the fictional names are not fooling anyone), the game itself is damn good as what it is.

Nintendo Power ranks ActRaiser #150 on their list of the Top 200 Nintendo Games of All Time.

The game is often noted for Yuzo Koshiro’s music. Koshiro performed an ActRaiser medley live at the Symphonic Game Music Concert in Leipzig in 2004.

In the original, uncensored Japanese version of the game, the protagonist is referred to as God, and the antagonist as Satan. Their names, as well as other most obvious references to Christianity were removed from the North American and European versions of the game to avoid any unwanted controversies. The ending, however, remained unchanged.
Signed by Kuzpo klo 0.48