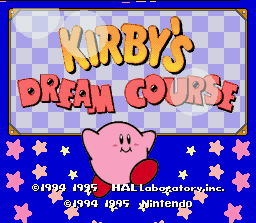 Two very successful Game Boy titles and one equally praised cult platformer for the NES – Kirby was on his way to fame to be one of Nintendo’s iconic protagonists in the 90’s, right beside Mario and Donkey Kong. What began as a regular miniature golf game project was turned into one of the most unique and unusual sports games of all time, when HAL and Nintendo collaborated to create Kirby’s Dream Course. As said, the result was weird – and it threw genre refinements straight out of an open window. Yet, it’s still fun.

The plot is very simple: King Dedede has devised a mischeavous plan and Kirby has to reach him by clashing through eight puzzling miniature golf courses filled with enemies. The game is CUTE, and that pretty much explains my opinion when it comes to its look – it’s negative. The graphics certainly aren’t bad, technically, and the game looks quite as innovative as it is: you can write your name or draw whatever you wish to sign your golf club membership form, using a paint tool or choose an existing default icon. The general look of the game is just too damn cute for my taste, and I’ve never personally liked Kirby as a character or the surrounding universe – the games are fun, but I have no love for the cast. The music is quite irritating for pretty much the same reasons. Even though a huge effort is made on the front, the game still doesn’t trigger my “aww” reaction in any way. You need more puppies and babies for that.

Kirby’s Dream Course is one weird game. It’s like a platformer, strategy game, puzzle game, golf, checkers, bowling and pool, all in one. It’s very hard to categorize, but everywhere I look, everyone simply calls it a sports game. It’s scarily addictive, and I haven’t even tried the multiplayer. There’s a story mode in single player, which takes you through eight courses with eight holes in each, that makes 64 altogether. The difficulty of the holes changes constantly, there are very easy ones even on the courses on the second half of the game, while some earlier ones will have you scanning the whole area and calculating all possible outcomes for a long, long while. You’re basically playing miniature golf in very platformer-like areas. There are warp zones, enemies, speed boosts, all you can think of. In every stage you have to clear the area of all enemies, and the last one standing will morph into the hole you need to get to. The enemies are disposed of by simply touching them, but sometimes it takes a lot more than you can offer with just one “swing”. There are airborne enemies and since the playing field is isometric, the enemies can be on any ground level. I think someone bragged about getting a hole-in-one in each stage, but I really don’t get how that can be humanly possible.

“Swinging” at Kirby, you can decide whether to hit straight forward, or high up into the air. The game’s default guideline usually shows the most ideal spot to aim at, but the angle and the force behind the swing is up to the player. You need a while to adjust to the game and see the results of different swings, and learn the ways of the “final boost” to gain efficiency. The angle and force are similar to those when playing pool in real life, especially when you need to hit two enemies at once by ricochet. In the video game, the monitor is also similar to those in many pool games. Each time you swing, Kirby loses a health point indicated by a tomato. You lose additional HP by touching obstacles such as spikes or indestructible enemies. Each enemy that is defeated replenishes one point, as well as each successful put. When you lose all your tomatoes – man, that sounds silly – Kirby loses a life. If you lose them all, you’ll have to start the course over. Kirby’s lives are tied to one course. They go back to the original number of 2 in the beginning of each course. If you manage to perform a hole-in-one, you gain an extra life for the rest of the course to consume.

Kirby’s success or even survival at each hole is not possible without some perks. Glowing enemies yield a power-up upon defeat, and each one is case-sensitive to a certain type of enemy, which makes them easy to spot at each hole. Just to mention some examples – snowmen give Kirby the ability to freeze water hazards to slide on them instead of sinking like a rock, electric bugs create an electrical field around Kirby which allows you to burn down trees, and some weirdos with parasols give up their accessories, so that Kirby can glide around using the parasol for a short while. Sometimes the perks are of no practical use when it comes to the final solution, but that’s why you need to study each one’s features carefully.

After the eight courses are complete, the door to King Dedede’s keep opens and a boss fight ensues, much like in HAL’s earlier game Adventures of Lolo 2, and this is just as generic and detached from the mainframe. It really doesn’t belong in the game, and no matter how many times you might lose this very simplistic fight, you always get to try again since it is a course in itself. The last hole in the game is much more epic than this final battle.

The game really isn’t that difficult to beat, but it might take some time. Also, some players will want to go for skill shooting and get as many hole-in-ones as possible; especially since the CPU opponent whose scores are shown after each course is damn annoying due to his optimal tally. I got two hole-in-ones out of 64 on my first run, so it’s hard in my view. You need to study and calculate the game relentlessly to learn all of the most methodical and efficient ways to it.

Kirby’s Dream Course is fatally addictive, even if it is so cute that it bothers me as a person. A fan of Kirby, strategy games and weird sports will love this game to death. It is a truly unique “sports” title, which I will surely return to from time to time. The best game in the Kirby franchise, in my opinion.

Originally, the game wasn’t supposed to be part of the Kirby franchise, instead a stand-alone miniature golf game entitled Special Tee Shot. In the middle of development, the commercial version of the game was decided to be refined into a Kirby spin-off. The original Special Tee Shot was still completed and released, but only in Japan and exclusively on the SNES Satellaview add-on.
Signed by Kuzpo klo 2.12