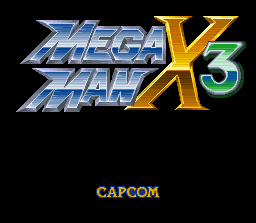 Mega Man X3 turned over a new leaf in the history of the Mega Man franchise... receiving the honour of being the first Mega Man game of the fifth console generation, and the last one of the fourth. As a game, it really didn’t change a whole lot. Arguably, just like its predecessor, it fails to live up to the first game in the X series.

Thanks to the efforts of a scientist named Doppler, the rest of the Mavericks in the world have been neutralized with the implementation of whole new Reploid technology which adjusts the robots’ free will. The reformed Reploids have built a city in Doppler’s honor, dubbed Doppletown. The Maverick Hunters’ early retirement comes to an abrupt end when the Reploids suddenly go haywire and begin unleashing chaos. When they find out that the person behind the Reploids’ violent behaviour is in fact the supposed benefactor Doppler, X and Zero take on another mission to foil whatever plans the good doctor has to ruin world peace.

It should be no surprise that the game looks good. It lacks obvious enhancements from the previous game, though – I think they saved the few changes and real effort to the 32-bit consoles. The SNES version looks so... mandatory, and forced. It feels like we’re playing X2 again, on all accounts. The music is actually quite lackluster on the series’ scale. I’m really surprised, because the previous X titles had some of the best soundtracks in the whole series. It should be noted, though, that the music in the 16-bit version is composed single-handedly by franchise debutant Kinuyo Yamashita, while the other versions have whole different music, made by four different musicians.

For the most part of the gameplay experience, everything’s exactly the same. There are just some minor tweaks, such as the much spoken and appreciated feature to play as Zero. Note, it’s a feature – not a choice, so don’t get your hopes up. You can’t choose the main character. Usually, you play as X, but every time he gets into big trouble he can’t escape at the moment, you revert to Zero who has some astounishing firepower at his disposal, a lot of health and durability. At its hardest the game makes you wish Zero would appear and kick the shit out of certain bosses you’re certainly going to have trouble dealing with. I guess even Maverick Hunters have coffee breaks... or oil breaks, whatever.

Once again, for the most part it’s the same old crash-boom-bang squeezed into a different cartridge, but the key thing is that there are more enhancements. There’s the exact same amount of heart tanks and subtanks hidden in each stage, you can’t have more of those – but everything regarding armor and your trusted X-Buster is enhanced twice, so once you really get started with the game, your chances of beating it will skyrocket, assuming you’re quite the explorer. Most of the capsules are hidden damn well. Most likely you will not find them all on the first run without a walkthrough, and you most certainly have to visit a few stages several times. I guess it’s nothing new to people who’ve played X2. The previous games had different ride armors, the first one had the marine model and the second one the flying armor. This one features both of them, plus two more: a bouncing model and one for underwater use. It’s still pretty fun to go around bashing robots’ heads in with these, but all too familiar.

The biggest problem with the game is that it’s way too predictable and just like the enhancements, all too familiar in general. The game can easily be compared to Mega Man 4 on the NES – a good game, which simply takes the repetition too far. The Maverick bosses deserve some compliments. We have Neon Tiger and Blast Hornet delivering the shite, and Blizzard Buffalo is clearly a better take on the whole blizzard theme than Blizzard Man with his ridiculous woolly hat in Mega Man 6. Still, regardless of how much Capcom might have tried to make it a basic but exciting title in the X series, the game just isn’t fresh enough and doesn’t uphold a casual fan’s interest for too long. There’s nothing that just takes you and doesn’t let go until the game ends. This would’ve been a fine time to come up with some new standards!

The game isn’t the hardest one in the X series. It’s still hellish to get started with the Mavericks, none of the boss fights are walks in the park by any measure when you only have the X-Buster in use. Yet, the same story continues – once you do get started and are really interested in the outcome, you’ll do fine eventually. The final stages aren’t too bad once you’ve found at least most of the enhancements. Mega Man X3 is definitely not bad for newbies, but I believe avid players of X and X2 will not get a whole lot out of it, if they don’t happen to live and breathe the franchise. Mega Man’s last stand on the SNES isn’t nearly as unimpressive as the one on Nintendo’s previous-generation system, but it could be better – more valiant.

The PlayStation version of the game was re-released in its original form as part of the Mega Man X Collection on Nintendo GameCube and Sony PlayStation 2 in 2006.

The SNES version of the game is the last game in the entire series to have a password feature. The other versions already have the save feature used in all future installments in the series on all platforms.
Signed by Kuzpo klo 6.13