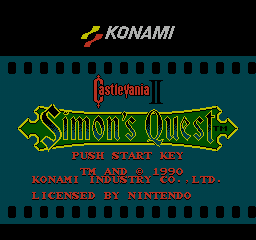 Castlevania was the surprise megahit initially exclusive to home consoles that arcade giant Konami needed to rise to the top in the ongoing and evergrowing trend of home gaming. A sequel was quickly put together, and instead of making just another standard platformer, Konami took notes from another genre popular among PC gamers, which some people refer to as “fetchquest”. The designers wanted to make the game a less campy title with less action, with more weight put on exploring and non-linearity. While some welcomed Simon’s Quest with open arms, some were highly disappointed with Konami’s poor execution of an excellent concept.

What a horrible night to play a game

Suffering from a broken back as a memento of his encounter with Count Dracula seven years ago, Simon Belmont visits his parents’ grave when he suddenly sees a young woman in the mist. The woman informs him of a curse Dracula cast on him as insurance of his resurrection, which is the only way to lift the curse. Simon must battle for his own life slowly drained by the curse while gathering parts of the Count’s body, to resurrect his nemesis and then seal his power forever.

The game doesn’t look like much, but still better than its predecessor and there’s some noteworthy, sharp detail. There’s no confusion as far as the graphical display is involved – the confusion is brought in by something else entirely. The music once again rules, not only is the general soundtrack magnificent, but almost straight off the bat we are treated to the first appearance of what might just be the singled out best video game tune of all time – “Bloody Tears”.

So audiovisually, the game is quite satisfactory. From every other viewpoint... it’s crap. Yeah. This isn’t James Rolfe talking, it really is crap. At the very least it’s crap compared to what Konami can do with the franchise. I don’t know exactly what happened here, I guess changing the formula of the game so radically has something to do with what Nintendo did with The Legend of Zelda and then the more open-ended and RPG-like Zelda II – which, however, I do like more than its predecessor. Simon’s Quest is truly a “quest”, just like Zelda II: The Adventure of Link is an “adventure”. This sounds awesome on paper: a medieval horror game, not just any old platformer but something much deeper and sustained. Like I said, Konami’s execution just ain’t on the mark. Make Simon’s Quest a double disappointment. Great concept, bad execution. Awesome game, terrible sequel.

When it comes to basic controls, the game is very much like its predecessor. Jumping is still more than a bit of a problem, and there’s lots of it, especially vertical jumping which is, naturally, harder than getting over horizontally – as is written the Murphy’s law of gaming. Anyway, just as stated, the “quest” part of the game is the most essential one. Your destination is up to you all the time; of course, travelling to wherever might not always be the smartest choice before stocking up on weapon upgrades, secondary weapons and maximum health, especially considering that you’re going to have to backtrack a LOT, regardless of where your travels take you. First true negative there, if you don’t count quirks like invisible holes in floors of vertical caverns (how do you spell “frustrating”?), the completely retarded dialogue (more about that in a bit) and the night/day system that constantly interrupts the flow of the game, in many a sense. You still collect hearts, but this time, also to level up, which has an effect on your maximum health. Yeah, a nice RPG element there. One of the small things I like about the game.

The conversation with NPC’s is torment and it has no point at all. Stiff grammar, irrelevant small talk, nonsense, all disguised as clues. You have to pick the right ones and set them apart from all the outright lies the people make your life miserable with. That’s kind of hard since you probably have no idea what you SHOULD do 99% of the time. It’s been said before and I do concur... the game is nearly impossible to beat without a guide of some sort thanks to the crappy “clues” you’re given throughout. Buying stuff is equally pure hell. In the bigger towns, there are a gazillion doors – the only one you’ll always know is the church door due to the big white cross on top of it... uh, aren’t all religious references against Nintendo of America’s policy? I guess this only applies to any sort of antichristian references... interesting. Anyway, you should know the location of the church at all times, since the priest has unlimited supply of healing powers for your benefit. Another interesting note there. The vendors, on the other hand, are scattered throughout; each one has ONE SINGLE item on sale. You never know what you should buy at whichever point in the game for maximum comfort. For example, I bought holy water, which I didn’t actually need, only to bump into another vendor who sold a useful whip upgrade, about five minutes later on the other edge of town. I had to wait for nightfall and sell my kick-ass for money and seek out the bastard again once the sun came up. “Here’s your money, now gimme my damn whip!” How about ONE vendor selling you EVERYTHING you may or may not need? I know, it’s one crazy thought, yet I like it.

The time of day changes constantly and the main difference between night and day in this game is that towns are invaded by monsters at night. You can make the best out of the nighttime by hacking up those slimeballs with your whip (that pathetic piece of string ain’t exactly what I’d call “Vampire Killer”) to gain some EXP and currency. The problem is that the time of day usually changes at the worst possible moment – and takes a long time to change, distracting the player – and if you’re doing something special in town, waiting for the morning sun feels like a few forevers. So do a lot of the indoor “levels”. While hacking through those abominations filled with the most awkward obstacles, one really starts to miss the simple platforming action of the previous game.

The game is long and boring. The pointless conversation only makes progress that much more difficult and awkward, as well as the constant backtracking. Like I said, I’ve heard professional gamers say that the game can’t be beaten without using some sort of step-by-step guide. I don’t doubt that one bit, I’ve seen the pretty much impossible “puzzles” of the game. Even if I was capable of beating the game without using a guide, I couldn’t possibly bring myself to do it due to the sheer boredom of the game and its other less impressive specifics. Those who have what it takes and like the game for reasons unknown, should know that there are three different endings for... err, replay value, I guess... depending on how fast you beat the game.

Castlevania II: Simon’s Quest lives only by its name. It’s definitely one of the worst games in the series. I actually avoided the whole franchise for the longest time because of this one title. I rented it several times as a kid due to my brother’s strange obsession with the game. I’m glad I got over my terrors. Despite sporting some of the best music in the history of video gaming, as a game and moreover, a sequel Simon’s Quest is one of the most devastating disappointments ever.

There was a lot of controversy regarding Nintendo Power Magazine’s 14-page article on the game, published in 1989. The front cover of the issue featured a real life model, dressed as Simon Belmont, holding Dracula’s severed head in his hand. There were several telephone complaints by parents who said their children had nightmares due to the cover. The magazine’s editors have since named the cover their worst one ever.
Signed by Kuzpo klo 3.40