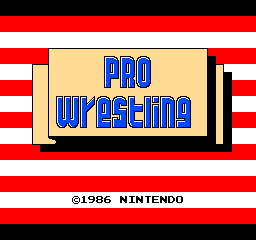 Back in the mid-80’s putting out several simply titled games such as Golf, Tennis, etc. made Nintendo the top player in the video game business. Professional wrestling’s popularity had reached whole new levels due to the establishment of WWF WrestleMania and largely because of some high-profile superstars such as Hulk Hogan and Randy Savage. Pro Wrestling is what happened when these two giants of different medias collided. I’m a huge wrestling buff. I mean, HUGE. Although I really got into professional wrestling in 2002 or 2003, I’d like to see that my fandom began many years ago when I first played this game – Pro Wrestling on the NES. I believe it was in 1990. It’s hailed by many as the best wrestling game of all time... I’m going to cross the border of blasphemy here and come out straight with it: it’s classic, but time has not been kind to it.

Actually, the graphics aren’t too bad. The animation’s surprisingly smooth and the portraits look good. The music and the sound effects are downright horrible. The “danger cue” was made to destroy nerves.

In the game’s defense – I guess – I don’t remember it being this stiff. Let’s go over the basics, shall we? In this game, you choose of six wrestlers and go for the biggest prize in the industry, the VWA (Video Wrestling Association) Heavyweight Championship. To win the title, you must beat every other wrestler on the roster. After you’ve done that, it’s time to defend the title. If you successfully retain the title in ten consecutive matches, you will go one on one with the most feared competitor ever to set foot in the squared circle, the VWF (Video Wrestling Federation) Heavyweight Champion, The Great Puma. If you win, you beat the game and are officially the best in the business. It’s that simple.

The characters in the game are embodiments of classic sports entertainment. Fighter Hayabusa is the quite normal type of wrestler, while all of the others have some sort of gimmick, quite exaggerated in the case of Starman and The Amazon. Most of the playable characters are remotely influenced by real-life wrestlers, at least it seems so; King Slender reminds me a lot of Curt Hennig and Lex Luger in one neat package. All of the wrestlers have one or two special moves. A lot of liberties are taken with the rules, for example 20 seconds is the count-out time – while it’s 10 in real life – and the count doesn’t stop until both wrestlers have entered the ring.

For such an old game, Pro Wrestling features an impressive array of different moves. However, they’re very random – only the special moves respond to certain patterns – and you don’t need more than one kick to the head to be pinned and defeated. The game is full of endless button mashing, and luck has more than a little to do with your potential success. The opponent can easily lock your character up with a series of kicks and pinfall attempts; it’s nearly impossible to break his hold on you when he starts going off like that. Also, the diving moves suck. You can’t perform one if the opponent is on his feet. You’ll just jump straight through him, and in some cases when you come crashing to the canvas following a failed dive, the danger cue hits even if you haven’t sustained any prior damage, and you can still be pinned. The game has no damage control at all. From where I sit, everything’s completely random. I beat the game multiple times as a kid, and now when I look back at those times, I have to say it had nothing to do with skills. It was pure luck.

The game is not difficult, it’s frustrating. It’s possible to learn the game’s awkward ways and master it with some extent of true skill, but most of it depends on sheer luck. I really wish the fangs of time would’ve spared this game, but they didn’t. The game brings back some warm memories, but today, the cool 8-bit characters and the nostalgic factor ain’t enough to make the game an interesting and entertaining way to pass time. Today, we have lots of fine wrestling games to choose from and I’m sad to say Pro Wrestling’s legacy is the only thing left of it. You people who still call it the most exciting wrestling game to play in these times: your point’s been taken. You’re different, you’re unique, we get that. Now won’t you go get a life?

Nintendo Power ranks Pro Wrestling #172 on their list of the Top 200 Nintendo Games of All Time.
Signed by Kuzpo klo 2.23