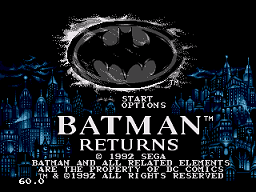 After the almighty SNES system had shipped to every corner of the world in 1992, Sega found themselves in a real bind as they had lost their previously exclusive control over the marketing of 16-bit technology. Perhaps in an effort to one-up Konami, who were still in the middle of developing three different games based on Tim Burton’s 1992 movie Batman Returns, including their pet project for the SNES, Sega hastily published versions of their own for the Genesis and Sega-CD, failing miserably when it comes down to the games themselves but enjoying some moderate commercial success due to a large Batman fanbase.

It’s Christmas and Batman is in a tight spot. He has been framed for the murder of a local beauty queen and therefore branded an enemy of Gotham City. He is out to get the ones responsible for his recent mishaps – The Penguin, the embittered and disfigured leader of the Red Triangle Gang, now a candidate for city office; and Catwoman, a violent vigilante who conspires with the Penguin because of seeing Batman as a threat to her business.

Well fuck me up the ass and call me 8-bit – this game isn’t even near 16-bit standards when it comes to the visual side. I know damn well that the SNES game was released over half a year later, but this version of the movie license doesn’t even remotely look as fine. The graphics are grainy, dark and confusing, and Batman has more than a slight tendency to completely disappear into the background. The effects look like they were stolen from the original NES version of Batman – The Video Game. The music is decent, mostly ambient stuff though, the sound effects are more on the front... and they, on the other hand, suck big time. I’ll sum this side of the game up by saying it’s like a really good looking NES game!

Sega refuses to learn a whole lot from Batman – The Video Game for the Genesis and takes the same odd way out. Bats doesn’t have a lot of moves, more weapons though, but the ammo is more limited than ever, and you also have the greatest chance ever to miss your target. The weapons aren’t worth jack, in other words. The combat is frustratingly difficult and the great amount of platforming steals away a great amount of patience. The grappling hook does work better than in the future SNES game and it has some purpose, but it’s about the only strong feature of gameplay. The boss fights will drive you just as crazy as they basically are, due to your character’s extreme and extremely annoying limitations.

The game is nothing but furiously tedious and frustrating. When you go one on one with Batman Returns for the Genesis, you go one on one with a mighty stormwind; instead of moving forward, you’re moving backwards, until you just can’t force yourself to try it anymore. Limitations after limitations. Ditch this and go for the SNES version. Sega indeed fucked up another major Batman license, there’s not much more to say. If you played Batman – The Video Game on Sega’s system, you already know what this is about, but this is just even worse.

There are a total of seven different, unique versions of the game; Sega published two of them. The first version, for the Game Gear and the Master System, was developed by Aspect, and although the game is similar to the 16-bit versions, it has notably different extra features.

Unlike other versions of the game, this game starts from the events in the middle of the movie’s storyline.
Signed by Kuzpo klo 0.32