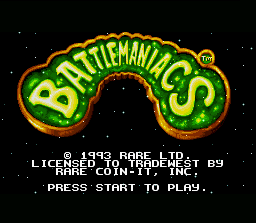 1993 was a busy year for Tradewest on the Battletoad front. Apparently so busy that the thought of making a new, fresh Battletoads game never crossed anyone’s mind. They gave the original game a new storyline, new graphics and new settings, and put it out as a “sequel” to the original Battletoads, on the Sega Master System and Super Nintendo Entertainment System. If you’re still up for yet another round of just a slightly modified version of the original game in disguise, with the very same if not worse difficulty level, Battlemaniacs is your game.

Zitz, Rash and Pimple are guests of honour at Psicone Corporation’s exhibition of a new virtual reality device named C.R.I.P.S.. During the initial test run, the Pigs of the Apocalypse crash the party under the orders of the Dark Queen and kidnap the Psicone president’s daughter, as well as Zitz, who recklessly tries to save her by himself. Rash and Pimple enter the Gamescape and fight their way through virtual reality to put an end to another one of the Queen’s evil plans.

The graphics and sound in the game are both top notch, nothing less. It’s a shame that production-wise, the game is such an easy way out. There’s some extremely cool, new animation, the sprites are a lot bigger than before and this time the ‘Toads really look like they COULD hold their own in a fist fight, and then some. The music is Dave Wise at his very best. Soon this guy joined forces with another in-house genius, Robin Beanland to compose the music for Donkey Kong Country. Considering the value of this game, I’d say that’s quite a leap forward.

What can I say but “UGH”? Seriously, I would’ve taken a sequel that sucked ass over another carbon print of the exact same game. It’s like the similarities between the first game and the Battletoads & Double Dragon spinoff just weren’t enough. On top of all, the plot might be tweaked, but the game isn’t when it comes to all things practical. Well, they at least tried to disguise it; I guess some props are in order. Some cuts here and there – for example, the first jetbike race doesn’t have regular enemies in the beginning, you go straight for the “main dish” – and some methods have been changed. You are no longer able to carry weapons, they’ve been replaced with special, case-sensitive moves, and you’re spelunking by hovercraft instead of the traditional rope.

Like in Battletoads & Double Dragon, enemies appear way more often, although this time you don’t have to worry too much about them ganging up on you, since you have a powerful two-way punch to use to your advantage when you want some personal space. The bosses are different, very different, but also way more simple in design. Design overall isn’t what it used to be. The stages are basically the same as before, but there are some extremely annoying changes that “keep the game from becoming too easy”. How do curved, spiked walls combined with hyperspeed sound? Not too good, huh? Well, welcome to the spelunking stage.

Battlemaniacs is one frustratingly difficult game, just like the one it’s based on, but not even that much fun to play. Even the first stage isn’t a picnic by any measure! As if you didn’t have a pathetic amount of lives already, sudden deaths are abound everywhere. Take the first stage for example, in which you might be stomped to death a few times by oversized pigs jumping at you quite randomly – the boss’ strategy is based on this, as well – and also, a badly timed jump in even the most slightly wrong direction in the pseudo-3D setting is likely to send your character head first into molten lava. The jetbike race... I’m not sure if I even want to talk about it. It’s what it originally was, and then some. If you thought the speed in the original was too much, don’t even try this.

Perhaps the most major change to the game is the Queen’s twisted game of checkers, a checkers-meets-bowling-meets-racing minigame in which you might earn extra lives. Note: MIGHT. It’s next to impossible in reality. Every 100th point in this race against time and enemies gains you an extra life, but the practically unavoidable enemies as well as the retarded “death points” make it hard to gather 50 of them.

Being yet another badly disguised rendition of Battletoads, the game is extremely difficult, but there are several things which take away from the joy of playing a game, and you just can’t wash the frustration, induced by the difficulty and the staleness of the whole franchise, off. The game still hasn't got unlimited continues, and no man’s patience is unlimited either. Battletoads in Battlemaniacs is an irritating carbon copy of Battletoads instead of a real sequel, and once again way too difficult for anyone to fully enjoy. Looks and sounds nice, but feels like a total drag, a preposterous rip-off.

Sega Master System’s version of the game is actually only a beta version, and it was released only in Brazil. The game was cancelled in every other region due to the Master System’s dying popularity.

The story of Battlemaniacs is loosely based on the first Battletoads comics written and drawn by Rare designer Guy Miller.
Signed by Kuzpo klo 2.08