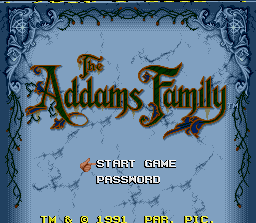 Barry Sonnenfeld’s big screen rendition of the classic 60’s and 70’s macabre sitcom The Addams Family is one of my favourite comedy flicks of all time. The SNES version of the licensed video game based loosely on the movie was actually the first SNES game I ever played, and back then I thought it was so cool. If only my memory had served me better. The Addams Family is still an almost decent and enjoyable platformer, and in its defense it’s one of the better movie licenses of the era, but its unforgiving difficulty and relative lacks in gameplay make it a less enjoyable experience.

The game is loosely based on the second half of the movie. Con artist Abigail Craven, her crooked lawyer Tully Alford and their cohort, Judge Womack, have succeeded in their plot to evict the Addams family from their mansion. As the head of the family, Gomez sets out to take back his home and save his wife and children, who are being held captive in various places within the mansion grounds.

The game looks like a simple, basic platformer, with colourful, vintage animation. The music is good and fits the Addams Family theme – yes, the actual Addams theme song shows up as well, in the style of the original TV show – however, the “stages” are so damn long that the original arrangements begin to sound like death chimes 20 minutes into the game. There ain’t a lot of different ones to begin with.

Let’s start off by saying that I never understood, not even as a kid, why every blockbuster movie of the 90’s just had to have its own licensed video game title even if there were no threads to make a game to begin with. The game doesn’t look or feel like The Addams Family at all. The characters look weird and have next to nothing to do with their counterparts in the movie, the animated series OR the original TV show. However, the portraits of the family members are modelled after the movie characters. The enemies in the game are straight out of something like “Night of the Living Mario” – rabid rabbits, evil turtles – most of them are easily dispatched with one totally lame jump on their heads, and there are some really corny items at Gomez’s disposal such as a flying cap and jumpshoes. The fencing sword and golfball, however, do belong here. Kudos for their inclusion, at least the developers watched the movie.

The controls are a bit oversensitive but OK, yet in narrow spots Gomez turns into a total bitch. You’re safe to expect tons of sudden deaths and leaps of unconditional faith whenever you’re needed to jump over large gaps. Even if you survive the jump, you’ll most likely hit an enemy on the other side and land just in a way it’s able to hurt you. It just gets tougher whenever there’s at least one of the following: thorns, spikes, or fire. You’ll have large, unwelcome difficulties seeing beyond your own nose. Also, often when you need to jump onto a higher level from where you’re standing, you’re likely to hit something on the way and fall back down. The timing in general is way too demanding in a reckless game like this, and if you jumble it up, about 95% of the time your misconduct ends in death. To top all of the possibilities of sudden death off, even your maximum health comes in the tiniest possible amounts.

The thin line between being truly difficult and being exclusively frustrating is very thin in the case of The Addams Family. Because of the restrictions in health and total lives, tendency for sudden deaths and the problems with jumping, and Gomez’s general incompetence, you’ll be cursing life itself for most of the game. You know at a 100% certainty you can make that one jump, but the game necessarily doesn’t, and the next time you try it, you’ll have zero lives to spare, you’ll make the jump, but fall due to a dumb mistake and are forced to start the ridiculously long stage all over again. If you’re playing the game on an emulator, you’ll have the state saving option handy, but be warned: even that doesn’t help you a whole lot once the totally preposterous backtracking begins, neither does the password system in the genuine game. Hell, what am I saying...? The passwords are utterly useless!

The Addams Family is certainly not as good or the cool fanboy trip I remembered it to be back from the days the Super Nintendo Entertainment System was the newest and meanest mother of a console around. It’s fun for a while, until the frustration hits you smack in the face and gives you a couple of additional slaps for good measure. It’s one thing to beat a tricky stage. Clumsy, oversensitive controls and ridiculous backtracking are something completely different, something that should NOT happen in an already overtly difficult 16-bit platformer.