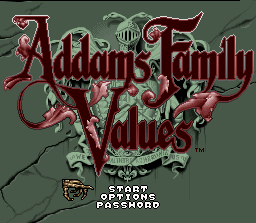 With their third game title developed under the Addams Family license, Ocean decided to go for something completely different; an action/adventure with RPG elements, in the style of Zelda and partly influenced by Sunsoft’s earlier Addams Family-related game Fester’s Quest. This strange venture resulted in a surprisingly decent, yet non-surprisingly very faulty game, loosely based on the movie of the same name.

When Fester’s new wife Debbie Jellinsky is revealed to be a black widow obsessed with her husband’s wealth, the treacherous woman kidnaps Gomez and Morticia’s newborn baby Pubert and goes into hiding. Fester takes it upon himself to find his nephew and take on hordes of monsters controlled by Debbie.

The game isn’t ugly by any measure, actually it looks quite decent, although plain and ordinary. The palette is quite poor and the game lacks unique graphical features. The graphical design surprisingly turns out to affect the gameplay – more about that later. The music is dark ambience all the way, with some beat added into it during boss battles. Not bad, but nothing too exciting either.

I like the new top-view approach. It’s kind of like what Sunsoft did with Fester’s Quest, only updated and comfortably restricted. The game is even fun to play – for a short while, that is. After that short while, especially when you reach the first real dungeon, the boredom hits you like a ten ton hammer. Every place looks exactly the same, surviving in the dungeons is extremely difficult – I’ll tell you why in a bit – and to navigate thanks to the ludicrous amount of warpholes, which unfortunately represent most transportation and even doors in the game.

The difficulty of gameplay is defined by the fact that you simply can’t see what the hell is going on. There’s so much crap on the screen, from obstacles to downright useless textures, with enemies hiding behind it. It takes forever to find the first decent weapon in the game – until that you’ll have to manage with Fester’s pathetic thunderbolt attack – and your health, represented by skulls instead of hearts, but the principle’s the same, takes another period of forever to level up.

Even though most of the “challenge” consists of the staleness inflicting a deep state of boredom and the difficulty to see all the shit going down behind the quite literal curtains, I must say that Addams Family Values is the first game in the series to pack some real, decent challenge aside from sheer frustration. I don’t doubt it one bit that a really patient, die-hard real-time action-oriented RPG fan can get moderately lot out of the game once surviving the first scares.

Addams Family Values is not too bad. Some elements of the game are as far from the movie as possible, but then again, Ocean used the “loosely based” wildcard again to get this movie license make sense, like they and a few other companies did with many, many licensed games back then. The game may or may not stick on you, after you’ve gotten used to its quirks. I personally suggest you stick to Zelda, but if you simply can’t get enough of the sort, feel free to try the game out.

Addams Family Values is the second Addams Family game in which Fester Addams is cast as the lead character. The first one, Fester’s Quest, was developed and released by Sunsoft in 1989 as an NES exclusive. It is based on the original Addams Family TV series, which originally aired in 1964-1966.

The Genesis/Mega Drive version of the game was released exclusively in Europe.
Signed by Kuzpo klo 12.26