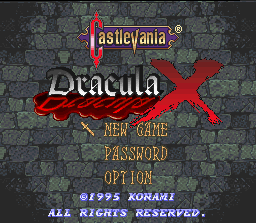 In 1993, Konami released a PC Engine game entitled Akumajo Dracula X Chi no Rondo, exclusively in Japan. This underground fan favourite was redesigned in a couple of years, and released as a SNES exclusive entitled Castlevania: Dracula X. Critics bashed it, fans avoided it, and more recently, every snippet of the added storyline was cut from the official Castlevania timeline. End of story? I wish it was.

It’s been a hundred years since the king of all vampires was slain by Simon Belmont, and people have forgotten all about fear. A small group of derelicts led by dark priest Shaft has formed a cult to worship Count Dracula and finally succeeds in resurrecting him. As his first order of business, Dracula exacts revenge on the Belmont bloodline by kidnapping Richter Belmont’s girlfriend Annet, and her sister Maria, and locks them up in the deepest dungeons of his castle. Richter grabs the Vampire Killer and enters Dracula’s keep with the intention of continuing the Belmont family legacy.

Excuse me... the game was released in what year again? 1995?! How can it possibly look this poor? I’ll tell you why, Konami was in a hurry. With the exception of some nice environmental textures, the graphics are grainy, the stages look boring (this is a damn ‘Vania game, that’s not supposed to be possible!), they still use Mode 7 but just for artificial proof that they at least tried to get on par with Super Castlevania IV. Once again, though, I have to compliment the music. It starts off bad, that “medieval techno” bit in the first stage is very awkward, but once “Vampire Killer” hits, you’ll know the name of the game. Yet another remix of “Bloody Tears” shows up at one point, but it’s the weakest in the whole series just as the game itself. Overall, Yamane did a moderate job, but she proves yet again to be the least talented of all the composers who’ve worked on the series, albeit the most experienced to date.

It’s not only the audiovisuals that make us think of Castlevania: Dracula X as a more believable near-launch title than Super Castlevania IV. I mean, talk about stripped. Think of any good quality from the previous SNES installment and most likely, it’s not here. This is like a generic, good-looking NES game, and it doesn’t stand squat against even NES’ best installments. Lashing the Killer in any direction WOULD help here, of course it would. In every sticky situation with flying bastards circling around you and skeletons approaching at the same time, you think to yourself: “taste the Killer”, but then you go “OMGWTF!!!???”, when you realize that you can’t do it. You’re constantly harrassed by enemies that you have next to no chance of hitting because they have an effective shielding system at their disposal – which you don’t! Not anymore! On the other hand, THEY will certainly succeed in hitting YOU, ‘cause their weapons are simply designed that way... the “fuck you” way. On top of all, usually we have a few of these fuckers attacking you at the same time, some in front, some above. Hey, just whip upwards. Fuck, can’t do that, I almost forgot already! Of course they can hit in any direction they want to. Naturally! This pantywuss you control ain’t even close to Simon and apparently has very limited motor functions. Hit the gym, douche!

Konami also figured the secondary weapons would be easier to use in the old fashioned way, by pressing up on the D-Pad + Y (the attack button), rather than just the A button. Whatever... The item crash from the original Chi no Rondo game is here, and it’s pretty much the only cool feature of this crappy port... or sequel... whatever the hell the game is supposed to be!

Jumping simply does not work in this particular game. You’re pushed off edges easier than ever, and the gauntlets are a hair away from impossible to survive completely unscathed, due to ridiculous enemy placements opposed to the speed you must go at to get out alive. Not only is the game frustrating, it’s repetitive and boring. Simply not worth your time. The plot is total shit, I mean how many times can they twist and turn the same basic story and setting in these times when the ‘Vania storyline actually means something? On the other hand the plot would be perfectly fine by me if the game was fine, too, but it really isn’t. One more time: this stupid asshole who can’t jump for shit, cracks his whip like a girl and moves like a freakin’ golem simply isn’t part of Simon and Trevor’s bloodline in my books. Even John Morris from the Sega game is more welcome to the family.

Richter’s sheer incompetence, the overexaggerated gauntlets and awkward controls make up the game’s challenge. It gets tough very quickly – you can’t help but think how much easier and more comfortable the game would be if you had Simon’s advantages from the previous SNES installment at your disposal. Frustrating as hell, that’s what the game is. It doesn’t give you much lives, either. The unlimited continues and the password system help out, but nothing can help you with the diagnosis of not caring, unfortunately.

This game is one damn disappointment from the beginning to the end... if you get that far. Castlevania: Dracula X is a hastily done version of a believably good Japanese game. The designers forgot some of the most basic things of the franchise, or just didn’t care: just an example being making something new and original. Instead, the game is a step backwards, and not a light one, either. I’ll take the NES games, hell, even Simon’s Quest, any day, as long as I don’t have to touch this game too many more times.

The original PC Engine exclusive Akumajo Dracula X Chi no Rondo is one of the most popular Castlevania games in Japan. The game was released in 1993. In 2007, a port of the game was included in PSP’s game collection Castlevania: The Dracula X Chronicles as Castlevania: Rondo of Blood; this was the first time the game saw daylight outside Japan. It was also released on Wii’s Virtual Console service in 2008.
Signed by Kuzpo klo 6.17