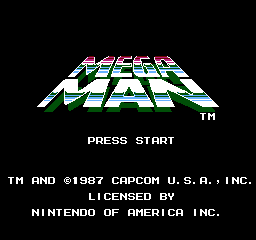 “Often imitated, never duplicated.” I wish this old saying could ring true about this immensely popular game series that is notorious for its self-repetition, yet constant, inexplicable popularity. Capcom’s 1987 platformer Mega Man was not a very successful game back in its time, but it has developed from one single, simple, but notoriously difficult game into an influential, and ridiculously vast and long-standing franchise; sequels which go by the exact same code are still made today. A long time ago, the franchise became one you either love or hate... or love to hate. Or hate to love.

Birth of the Blue Bomber

Dr. Light and Dr. Wily are two scientists working on robots for industrial purposes. Wily has his fill of standing in the shadow of the brilliant and kind-hearted Light, reprograms their six latest creations and plans to use them for world domination from his large fortress. Light upgrades Rock, his mechanical lab assistant, to a battle robot he renames Mega Man. Mega Man’s objective is to incapacitate all six robots and bring the renegade Wily to justice.

The graphics aren’t quite as refined as in the later games, and some of the bosses look really wimpy or just stupid. I mean, check out Ice Man – what a dork! The framerate sucks, the level design’s generic and the standard enemies exclusive to the title could’ve used just a bit more imagination in look. The music, composed by Manami Matsumae and Yoshihiro Sakaguchi a.k.a. Yuukichan’s Papa, is one of the things the series became known and slightly parodied for. Very good, upbeat stuff, which kind of sounds like a strange mixture of rock and Russian folk music.

Everyone who has played at least one Mega Man game in their life knows what the gameplay’s like: not very forgiving, that’s one thing for sure. This game is one of the worst in that sense. The respawning rate of enemies is ridiculous. If you, for example, shoot an enemy on the very edge of the screen and it manages to shoot you before exploding, you fall several steps back – which is very annoying in itself, especially near pits – and when you manage to move forward again, that very same enemy is miraculously back from the dead. Running back from enemies that come in from the front respawns the ones you destroyed just before and you’ll very often find yourself surrounded. Familiar quirks to anyone into the franchise, I’m sure.

Those who aren’t, let me explain the basic concept of Mega Man. In this game, you control a blue-plated android named Mega Man, who’s up against six of the most powerful worker robots in the world. Each of them have their own stage and theme. You can easily guess the themes of their stages from their names: Bomb Man, Ice Man, Fire Man and such. At first, Mega Man is only equipped with his standard weapon, an arm cannon – which I’ve been thinking about getting myself, haha. Whenever Mega Man destroys one of the bosses, he “inherits” his weapon. The bosses can be beaten in any order, but those who want to do it as easy as possible may strategize by calculating which weapon would work on which boss the best, and make progress with that in mind. Just an easy, very traditional example is the fact that fire does not go well with ice.

After beating all six bosses, you unlock the final Wily stages. These are pretty much a mixture of what you’ve seen in the game so far, and you will need your weapons for more than just dismantling renegade robots, for example, to destroy obstacles and create your own ways to make progress with a “secret” weapon, a platform beam. This game was indeed very innovative at its time; it mixed strategic action with platforming, but that doesn’t mean it’s my favourite game in the world, not even in the series. I must admit that in some strange, twisted way, as much as I hate some of the common problems in the whole franchise, I’m a fan! The things that bug me most about the game are some of which were never fixed in the sequels, are the physics of the main character. This is supposed to be a platformer; this guy’s supposed to be super robot and he can’t jump higher, or even crouch?! Good timing’s difficult, yet extremely important – that’s another thing. I already mentioned the respawning enemies... and perhaps the worst flaw ever: there are points you absolutely MUST damage yourself to get forward. That’s just stupid.

The game is definitely the shortest Mega Man title, and not the most difficult one there is, but it is far from a nice little walk in the park. Platform jumping is a huge stepping stone – perfect timing and knowledge of your surroundings would help, but they’re hard to maintain. Checkpoints are rare, so are extra lives. Yes, you have unlimited continues, but starting some certain stages over is a challenge to your mind and soul. The bosses in the game are not very difficult – I can nearly beat the stages clockwise, starting with that useless dork Ice Man. The final stages are also of moderate difficulty at most, but they have extremely annoying design; it’s almost impossible to go into the boss fights unscathed and/or with full lives. The final bosses are a bit more difficult than the robot bosses, except if you know some handy tricks or glitches to use to your advantage... *cough*. There are also a couple of boss survival sequences. So, good luck with the game.

Mega Man is still an OK game and fun to clash through once in every ten years, but after so many similar sequels and so much more to bitch about than, say, the next two games at least, I must say the 1987 classic has seen its glory days. Of course the game is recommendable to anyone who can’t get enough of the Blue Bomber and is on the market for a decent challenge.

Nintendo Power ranks Mega Man #61 on their list of the Top 200 Nintendo Games of All Time.

The cover art of the game was named the worst in video game history by GameSpy, due to its utter irrelevancy with the game itself.

The game’s concept was heavily inspired by a traditional game of rock, paper and scissors.

The game was renamed from Rockman to Mega Man in the U.S. to avoid trademark issues with the Rockman amplifier series.

Dr. Light is never mentioned in the game. The instruction manual refers to him as Dr. Wright, and in Mega Man 3, he’s called Dr. Right. However, the official canon recognizes him as Dr. Light, as he was introduced in Mega Man 2.

In the Japanese version of the game Dr. Wily was never Light’s partner, but simply a mad scientist attempting to take over the world.

The Yellow Devil boss was renamed the Rock Monster in the U.S. because Nintendo of America had a strict rule concerning religious references in games. (Editor’s note: as somewhat proven by Castlevania II: Simon’s Quest, usually this rule only seems to apply to antichristian references)
Signed by Kuzpo klo 2.49