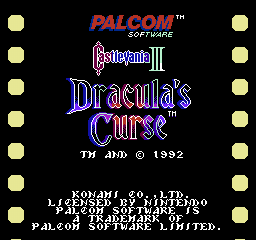 Castlevania II: Simon’s Quest was released to mixed reviews. Some persistent people still praise the game for its better qualities, while others have a certain vision of what a pre-SOTN Castlevania should play out like. Konami returned to the series’ roots with Castlevania III: Dracula’s Curse. The game got critical approval in both Japan and North America where it was deemed one of the best offerings on the NES, but us Europeans had to wait for its release until 1992, and as expected, it went largely unnoticed due to the recent shipment of the SNES and Castlevania IV. A forgotten gem? You bet.

Back in the 15th century - when a problem came along, we just whipped it

In the year 1476, a vile tyrant known as Count Dracula begins to conquer Europe. The Belmont family, known for their skills as vampire hunters, is called in by the church even though they were exiled by that very same church due to their inhuman powers many years ago. Trevor Belmont, the current wielder of the Vampire Killer family whip agrees to walk the long road to Dracula’s castle and fulfill the destiny that once was, and is to become his family’s destiny for the next hundreds of years.

The game practically looks exactly the same as the first Castlevania. The more complexed level design guarantees a bit smoother procession though, and the general font is different. Surprisingly, I’m a bit disappointed of the music in this game! The Castlevania series is known for some of the best video game music ever, even the shitty Simon’s Quest which provided origin for some of the best tunes, but for some reason, this game just sounds bland. Good tunes here and there, but nothing that really blows me away from the get-go.

Gameplay’s back to the roots with some welcome tweaks, but also some standard peeves. The first stages feel just like Castlevania, but after you’ve done away with few of them, you’re given many choices of route to Dracula’s keep, the short one or the long one. The shorter routes have the advantage of being, duh, short, as well as notably easier in every possible way. I’d vote for the hard ones though; not only will you feel better about yourself, but there’s also a great big chance you’ll meet an extra character who you can take with you and even play as him or her! Very cool!

Each of the playable characters in the game has an exclusive weapon, a special ability or two that you can use to your advantage, but also a notable weakness, so put some thought into who you choose as your partner. You can only bring one friend with you to each stage, which is comprehensible since all characters have their own health meters, independent from each other. Naturally, it’s possible and perhaps the easiest way to beat the game by just using Trevor, but advanced players are encouraged to try everything at their disposal. To add to the fun factor even more, there are four different endings depending on who’s fighting at your side in the final battle, if anyone.

The level design, as I mentioned, is a bit more complexed scheme than before. There are lifts, many of them, both vertical and horizontal, and large parts of many stages comprise of platform jumping between them. Not exactly my idea of fun, especially when the going gets tougher (a LOT tougher), but it’s surprisingly easy to get over it, since the game is vintage ‘Vania material. Some stages have rooms filled with bricks – the player has to wait for acid rain to melt some of them and then think of a fast and logical way to climb the bricks to the next destination before they’ve all melted away. This one’s still quite OK... but then, we have bricks falling out of the sky, forming a path. The player has to dodge the falling bricks and wait for them to pile up into a route to an upper level. It’s a decent idea, but the pile-up feels like forever and the checkpoints in that relation aren’t very logical. If you happen to die in the screen AFTER the biggest session of human Tetris found in the game (which is a little bit too likely), you’ll have to start the whole thing over. The checkpoints in general have next to no logic in them, and the logic only decreases towards the game’s end, unfortunately.

Some of the peeves from both previous games return. Spikes seem to impale from a distance, the edges are still very dangerous places to camp on and flying enemies are present just to annoy you and ultimately to offer up infernal torment; especially during difficult platform jumping on the horizontal lifts, which requires beyond perfect timing. Sadly, the game features the most amount of purely annoying monsters out of all Castlevania titles, and you just can’t seem to give them a dose of the Vampire Killer at the correct time. Ever. It’s the famous knife in the wound.

The boss fights in the game start off easy, and there’s not much strategy needed for them. However, the difficulty level of the fights gets a major boost once you reach the halls of the castle, which you have to pass through in order to get to Dracula, regardless of which routes you took before. You can still take some easier shortcuts on a smaller scale inside the castle stages, but you’ll have to find them first. If and when you do, I certainly recommend using them. This game is damn difficult. Don’t let the breezy start fool you.

Damn difficult...? I meant HELLISH. Players don’t have to be any sort of gurus to reach the castle, but from there on out, the game holds nothing back. The time limit is there for a reason this time. It’s quite unforgiving. Health items are extremely rare and well hidden throughout the game, and the swarms of enemies paving the ways to boss fights take good care that you don’t go clashing with the big cheese at 100%. On top of that... are you really ready for this? At one point in the game, you have to face three hellish bosses at once, without any sort of regeneration, the kind you had in the consecutive rematches in the Mega Man games. It’s not easy, I can tell you. Luckily there’s at least a password system, because you are NOT finishing the game during one single session if you’re being honest to the game and yourself, and unlimited continues.

Castlevania III: Dracula’s Curse is an excellent, updated Castlevania title, which takes the player to a nice field trip into the ‘Vania universe before taking a turn to Hell’s deepest depths. To say the game provides challenge is a quite rough understatement, and there are lots of interesting new features. Too bad the graphics are still as ugly and confusing as ever and the music is quite lackluster compared to the best in the series, but all quite irrelevant subjects aside, Castlevania III put the series back on the right track.

Alucard is “Dracula” spelled backwards. He is Dracula’s son, and he first appears as a boss, a decoy of his father’s.
Signed by Kuzpo klo 3.58