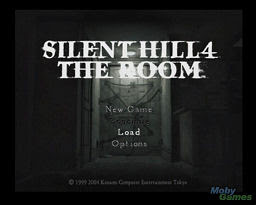 During the production of Silent Hill 3, Team Silent was also working on a whole new survival horror game entitled Room 302. Seeing how well the game would probably sit with fans of their already popular franchise, the developers scrapped the commercial risk and rewrote the game as the fourth installment of Silent Hill. Silent Hill 4: The Room momentarily took the series in a new direction – while the developers succeeded in making one of the most scariest games of all time, they lost their grip on the most important factor of any game: gameplay.

Henry Townshend is a photographer who lives a quiet life in his fancy apartment in South Ashfield Heights. One seemingly ordinary day Henry becomes a prisoner of his own apartment. The windows are sealed shut, the telephone won’t work, the door is chained from the inside and the interior design changes before Henry’s very eyes. No one hears his cries for help. Henry is close to giving up hope when he suddenly finds a huge, gaping hole in the wall of his bathroom. Desperate to get out of his apartment, Henry crawls through the tunnel and enters an alternative reality, which he soon finds to be the twisted dominion of a famed serial killer.

It is no surprise at all that the game is an audiovisual treat. The effects are phenomenal in both graphics and sound. The transformation and distortion of Henry’s room, the vintage grain effects, the character design, the environment in general... everything’s eye candy. The game is a lot darker than the previous games and looks just a bit bland because of that, but still artistically great. Should I even mention the music anymore? Yamaoka and his two favourite cohorts of lead vocalists, Mary Elizabeth McGlynn and Joe Romersa, bring some awesome tunes to the table. “Room of Angel” and “Cradel of Forest” are amazing, haunting tracks, regular listens on my Winamp playlist in fact. The sound effects... my God. It’s really a damn shame that the game itself doesn’t live up to the standards of the franchise.

The voice acting is the best available in the series. Donna Burke is luckily excused from the regular cast and there’s no one overdoing his/her part on her heels. Eric Bossick who plays Henry seems to be UNDERdoing his role, though. Sometimes it feels like the only line the guy says in the whole game is “What....... the........ hell?”, in a slow and completely careless tone, although his character is watching his life go to utter shit. Heather Morris – who played Heather in the previous game – makes a comeback as Eileen. Robert Belgrade, who’s most famous for doing Alucard’s voice in the original version of Castlevania: Symphony of the Night makes a cameo as the spirit of a dead dude.

The presentation of survival horror in this game is off the charts, absolutely phenomenal. Although it employs some really awkward twists in the plot from time to time, Silent Hill 4: The Room is a story well told, and a really scary game; actually the first game ever that has literally scared the shit out of me in various ways and in various points of the game, especially near the end. Getting to the end is something else entirely... the frustration towards the lacking gameplay takes good care of that.

We start off with a first person view. Each time you’re in Henry’s apartment, the view changes to FP, to make the visit more personal. It’s way cooler than it sounds like. We get a good look at all the shit going down, the dead... well, things, in the fridge... the mysterious footprints, Henry’s photos and paintings, everything. There are quite a few things we can do here, like peep on the neighbours – through another hole in the wall or the actual peephole – check out the sights from the window, and every kind of stuff that is vital to the storyline. Saving is possible exclusively inside the apartment – it is done by examining a red book on the living room table. There’s also a chest. This chest is just one of the roots of the problems with gameplay. Remember Resident Evil’s inventory limit? You should also remember that in previous Silent Hill games there was no limit at all. Apparently, Konami thought that this time around it would be a great idea and a cool attempt for more realism to make Henry’s inventory limited. Well, this is the only chest in the whole game. Whenever you leave the room, you’re forced to return every time you find something useless like bullets. Or a key item. Anything... if you don’t have the space for it. Saving in one single place wasn’t bad, but this chest thing... it simply doesn’t work, not in this day and age. During the first half of the game, you’re healed whenever you enter the room, but visiting the chest and saving becomes torment near the end of the game, when the ghosts inside the room – unless you’ve effectively exorcised them by using items that are found very rarely – drain your health very rapidly whenever you enter the living room, and see you off with an ounce of health left. Good luck, Henry!

The combat system’s somewhat different. The basics are still the same, but this time, your health bar is shown in the upper left corner of the screen every time you engage, as well as a strength meter. Whenever you use a melée weapon, you can charge the strength of your swing by holding the attack button. It’s a good idea, but the meter is damn slow and the enemies are usually damn fast. There are enemies known as Victims; they’re ghosts you simply can’t kill. You can hold them down for a while by using different items you won’t even get a hold of until the later half of the game, but they won’t go away for good. Their mere presence deals damage to Henry. Whenever these fuckers are around, run. God damn it, run! It’s retarded, but your only choice. Damn, you didn’t run fast enough and you’re on the brink of collapsing. You need a health drink. Let’s check the inventory. Nope, not there. Maybe you have one in your chest. Fuck, where’s the nearest hole?! Travelling between the different scenes and Henry’s crib is a drag, a distraction, and completely retarded. Guess what? It gets worse.

I don’t want to spoil the story too much, but in the later half of the game, you will be joined by a companion who is badly injured and therefore, sucks in combat... at least I hope for the companion’s sake that the injury is a proper excuse. This person follows you everywhere, absolutely everywhere, and doesn’t stop at any point to let you do your business in peace. You can’t open doors if you’re too far away from the person and during combat, all this person does is stand in the way. It gets EVEN worse. At one point, the companion starts to freak out and have these weird seizures every time those damn Victims appear. Not only will you have to find some way to get your partner away from the ghosts, which usually takes a long while and you’ll be damaged yourself, you’ll also have to deal with the person’s repetitive monologue that doesn’t make any sense. Get this... it gets EEEEEVEN worse. Not long after you’ve picked up your partner for the first time, you’ll be attacked by the big cheese of the game. Constantly. So, now you have to drag your retarded friend around while dodging bullets from the gun of a seemingly immortal psycho. No matter how many times you down him, he always comes back. Sometimes, you don’t have to do more than leave the screen and come back, and there he is again, shooting at you or mauling you with a steel pipe, or whatever the fuck he does. He simply can’t die before the decisive battle, so what’s the point in fighting him? Well, it is pretty hard to get past him, so I guess you have no choice but to waste a few good bullets on him, time and time again. That’s bullshit.

The first half of the game IS good. Even the gameplay’s decent until that first half is finished, but when all the extra stuff starts pouring in, the quality of the game drops like a boner after witnessing Kathy Bates naked (watch About Schmidt for some whale porn). Other issues are the lack of intense boss fights – there is only ONE boss fight in the whole game – as well as the lack of real puzzles. There are a few no-brainers, nothing really difficult. There isn’t even a puzzle level to choose, because all sorts of brainteasers are such a small part of the Silent Hill 4 experience. There are several endings, but first of all the classic UFO ending is gone, and secondly, it’s immensely difficult to get some other ending than one of the bad ones. On top of all, the endings aren’t too rewarding in any sense – except for “Cradel of Forest”, which carries out the end credits – despite of the fact that you just beat the worst and most frustrating Silent Hill game ever. Frustrating’s indeed more like it than difficult. If you can somehow find a way to manage the totally tedious, retarded aspects of gameplay, you’ll beat the game quite fast. The different endings are hard to get, and it’s difficult to get yourself to replay the game.

One of the most potential new franchises of the last 15 years. Perhaps the most gripping storyline in the series, with a few minor, simply ridiculous twists – like the biblical cord’s importance, what the fuck? – resulting in some crappy dialogue, saved by some decent acting by SOME people. Most authentic survival horror atmosphere. One of the scariest games of all time. So why, WHY is the game so mediocre? Did they test it? Did they not really see all the things that are horribly wrong with the gameplay? Just because the game is so beautiful in its own macabre way, and because it’s basically a Silent Hill game, I’ll let it pass with a relatively decent rating. They could’ve done worse.

The serial killer Walter Sullivan was first mentioned in a note in Silent Hill 2.

The journalist Joseph Schreiber was first mentioned in a note in Silent Hill 3.

According to Henry, superintendent Frank Sunderland’s son and daughter-in-law disappeared in Silent Hill a few years ago. Mary had been dead for weeks leading up to the events of Silent Hill 2, and James went to Silent Hill to look for her.

The occultist Jasper Gein is named after Ed Gein, an infamous serial killer.

One radio news report says Suguru Murakoshi has been caught urinating off a telephone pole. Murakoshi is the game’s co-producer.
Signed by Kuzpo klo 3.49